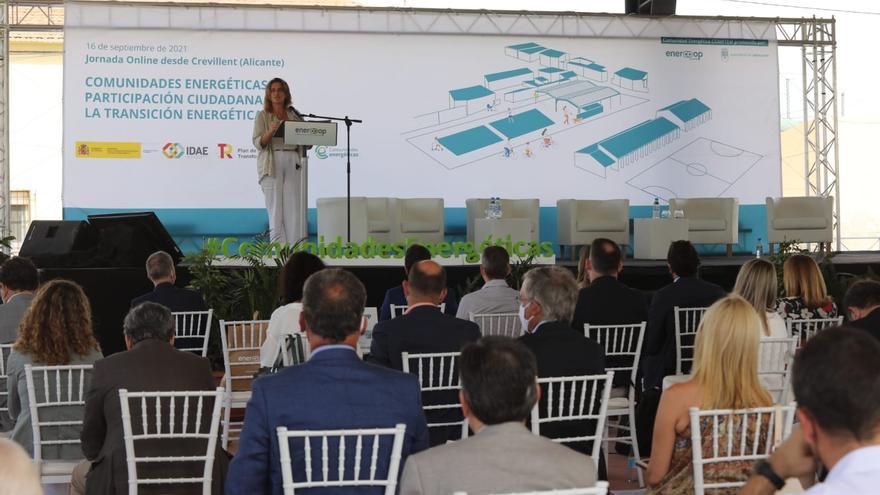 They will be distributed in three aid programs whose hearing and public information process will be opened imminently. They will help accelerate the achievement of climate goals and serve to catalyze citizen participation in the energy transition. “Every day it is more evident that citizens and SMEs want to participate in the energy model as they do in other areas of society,” said the vice president.

During his speech, Ribera emphasized the importance of local energy communities: “they have A lot of advantages, because they provide proximity energy and proximity benefits. They also reduce the energy costs of the partners and the municipal area and, being close to the territory, they know its sensitive points and the advantages they can offer, facilitating a good relationship with the environment. Now we can imagine 1,200 villages with communities or 300,000 solar roofs ”.

The energy communities They allow the development of projects promoted by the population, SMEs, cooperatives or local entities in areas such as renewables, energy efficiency or sustainable mobility. The people involved in these communities are, in turn, producers and consumers of their own clean energy, which results in a greater democratization of the energy system and significant savings for the final consumer. For all these reasons, they constitute a key figure in the transition towards a clean, open and participatory energy system.

In addition, these figures provide important economic and social benefits in the territories where they are implemented, since they help to stimulate local activity, generate employment and establish population in municipalities with demographic challenges.

In this sense, the vice president highlighted her role in promoting a transition towards a rural model with affordable and sustainable energy: “We want all territories to take an active role in the energy transition and benefit from the advantages it generates, such as the lowering of energy, independence from the tensions that occur in international energy markets or the generation of economic activity ”, he pointed out.

The 100 million euros from the PRTR mobilized for this plan will be distributed in three centralized management programs: CE Aprende, CE-Planifica and CEImplementa. These lines will be complemented by a network of Community Transformation Offices which, coordinated by the IDAE and distributed throughout the territory, will accompany and advise the energy communities throughout their development chain and will facilitate access to each line of aid.

The first of the lines (CE-Aprende), in a simple concurrency regime, aims to help individuals or organizations interested in the constitution of an energy community to become familiar with the concept and identify future partners or members. It will subsidize actions such as the expenses associated with the revitalization, promotion and publicity of the community.

For its part the second line (CE- Planifica), also of simple concurrence, is oriented to the approach and constitution of the energy community itself. This program includes the financing of studies and contract models or specialized technical assistance and legal advice.

Once legally constituted, the energy community may be eligible for financing from the third line (CE- Implementa), which is articulated in a competitive competition regime. Through it, comprehensive and transversal projects in the field of renewable electrical and thermal energy, energy efficiency or electric mobility will be subsidized.

The selection of projects will take into account factors such as the degree of innovation, the levels of social participation that the initiative has incorporated, its social benefits, its contribution to the fight against energy poverty, the generation of employment or the gender perspective, as well as the combination of different actions such as the promotion of renewables, the energy efficiency and sustainable mobility.

The announced grants complement other Miteco programs under the PRTR from which the energy communities, such as the MOVES III program for the promotion of electric mobility, endowed with 400 million expandable to 800, or the incentives for self-consumption of renewable energies, which has an initial budget of 450 million expandable to 900.

They also join other measures launched by the Ministry, such as the auction for the installation of new plants of renewable generation scheduled for next October 19. In it, a specific quota of 300 MW has been reserved for small photovoltaic installations with a strong local character and promoted by citizens, so that energy communities are one of its potential beneficiaries.

In recent years, in Spain numerous experiences of energy communities have been promoted on a local scale, while steps have been taken towards their regulatory recognition.

In June 2020, Spanish regulations introduced two new legal figures: citizen energy communities and renewable energy communities. In November of that same year, MITECO opened the prior public consultation process for the development of Local Energy Communities which has served, together with the Expression of Interest to define the lines of the PRTR, as the basis for designing these grants.

The more than 450 demonstrations received show the interest in the figure of the energy communities in Spain. They stand out for their transversal and comprehensive nature, since most of the projects presented combine initiatives for electrical or thermal production, energy efficiency and sustainable mobility.

Fruit of the bet of government for the energy communities within the framework of the PRTR, the Miteco, through the IDAE, will organize together with the Generalitat Valenciana the I National Congress of Energy Communities. The appointment will take place in the spring of 2022 in Crevillent.

Likewise, in line with the announced actions, the IDAE will enable in Genera 2021, the International Energy and Environment Fair held in November in Madrid, a specific discussion forum for energy communities open to initiatives that want to share their experience.

At the same time, IDAE is investing in initiatives that promote citizen participation, such as the start-up Fundeen, a company aimed at crowdfunding renewables that allows anyone to make small investments in projects of this nature, and has granted a loan to the ‘Illa efficient’ initiative, in which several communities of owners of the same block in Barcelona have come together in the form of a cooperative to undertake a joint energy rehabilitation project.