The Council of Ministers has approved this Tuesday the final text of the democratic memory bill that will take to the Cortes. There the opposition of the PP and Vox awaits him. Both parties have not only promised to repeal the law – not yet approved – if they reach the government, but in recent weeks they have promoted a wave of historical revisionism criticized by some of the specialists on the matter and by most of the parliamentary spokesmen.

This Monday, in a ceremony in Ávila to which the PP invited Ignacio Camuñas, former UCD minister and one of Vox’s godparents, he denied that it was a coup d’état that caused the start of the Civil War. “If there is a person responsible for the war, this is the Government of the Republic,” he said. The opposition leader, Pablo Casado, did not correct him. In fact, on June 30 he already made similar statements in the Congress of Deputies, when he stated: “The Civil War was the confrontation between those who wanted democracy without law and those who wanted law without democracy. And our Constitution is the pact by which there can be no democracy without law or law without democracy ”. Professors of contemporary history immediately denied that revisionist discourse.

Félix Bolaños, who was premiered this Tuesday as minister at the press conference after the Council, stressed that this is “the first law that repudiates the coup d’état of 1936” and assured that the objective is to correct the deficiencies of the approved norm. in 2007 indicated, among others, by the then United Nations rapporteur Pablo de Greiff. “No democratic force should have any problem in honoring the victims of a dictatorship. The will of the Government is that they join a law comparable to other countries in our environment, ”the minister insisted. 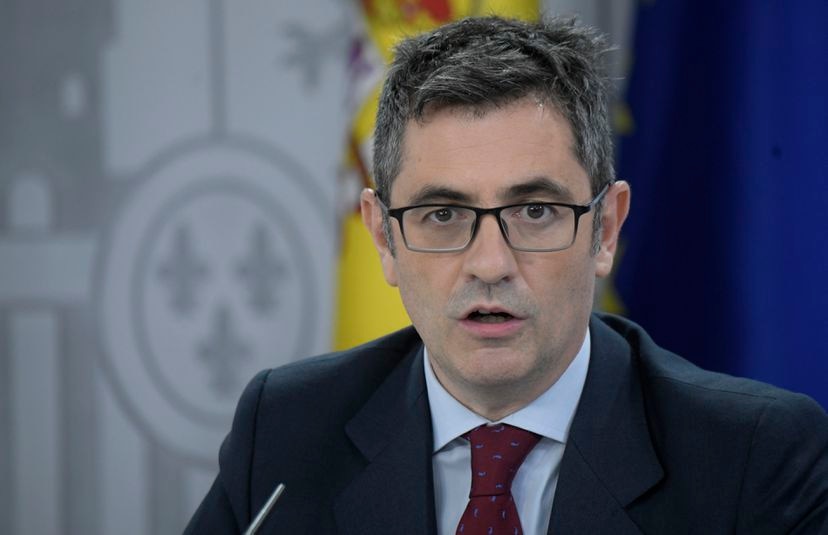 In video, Félix Bolaños explains all the measures of the new democratic memory lawEP

These are the keys to the text written after listening to the recommendations of victims’ associations, the General Council of the Judiciary, the Fiscal Council and former United Nations rapporteur Pablo de Greiff.

Teaching of Franco’s repression. As this newspaper announced a year ago, the new norm aims to update all the curricular contents to incorporate in ESO, baccalaureate and FP the teaching of what the Francoist repression and the defense of democratic values ​​entailed. In his report on Spain, the United Nations rapporteur dedicated a specific section to education. De Greiff lamented that “some textbooks” continued to refer to the Civil War “in generic terms, perpetuating the idea of ​​symmetrical responsibility.”

Nullity of sentences. The memory law of 2007 declared the Francoist courts illegitimate, but did not annul the sentences they had imposed because at that time the Government of José Luis Rodríguez Zapatero feared that those affected would demand compensation. The state of war, declared on July 28, 1936, was in force until March 1948. The decree empowered the rebels to punish for military rebellion anyone who “by action or omission” harmed the “Redemptive Movement.” Only until the end of 1938, the War Audit tried 30,224 people, of which 3,189 were sentenced to death, as Paul Preston records in The Spanish holocaust. The military chose the judge, the prosecutor and the lawyer for the accused, who did not speak to his clients and was usually an officer without legal training. Trials of 29 people with 15 death sentences were dispatched in 90 minutes: three per accused. The text of the rule that will be debated in the Cortes declares the nullity of the “convictions and sanctions” of Francoist courts and expressly rules out the possibility of compensation.

Exhumations, census and DNA bank. The coroner Francisco Etxeberria, who advises the Government on historical memory, estimated between 20,000 and 25,000 victims that could be recovered from mass graves in four or five years. The 2007 law established a subsidy system in such a way that family associations were responsible for the entire process of locating the disappeared. That was the main criticism of the United Nations, which spoke of “privatization” of the exhumations and “abandonment” of the descendants of the reprisals. The Government now intends to involve all the Administrations and the Public Prosecutor’s Office in the location and opening of graves. In addition, an official census of victims will be drawn up, gathering scattered information and giving an official character to the figure of the most tragic episode in contemporary Spanish history. There will also be a DNA bank. A computer program will allow the creation of a repository, so that each laboratory can upload the genetic profiles of relatives and of the remains recovered in the graves to make comparisons and identifications.

Specific prosecutor to promote investigations. One of the great novelties of the new law is that it establishes that “the State will guarantee the right to investigation” and to know the truth about the victims. For this purpose, the figure of the “prosecutor of the human rights and democratic memory room” is created, who will be able to promote the search for the disappeared of the Franco regime and investigate violations of international humanitarian law that occurred in the Civil War and the dictatorship and until the approval of the Constitution , in 1978. In 2014, the UN Special Rapporteur Pablo De Greiff issued a report in which he urged Spain to annul the Amnesty Law in order to investigate the crimes of the Franco regime. The report of the Fiscal Council that examined the text of the new norm defended the concept of “restorative justice” as the way to do it regardless of the possibility of punishing the guilty. Five council prosecutors cast dissenting votes, considering that it generated “false expectations” in the victims’ families. Bolaños admitted on Tuesday that there are “difficulties and limitations”, among which he has cited non-retroactivity and prescription, to carry out criminal investigations and has encouraged groups to present amendments “to improve” the text of the rule if necessary. In any case, he has assured that “in most cases” it is foreseeable that those responsible for the crimes have died.

Extinction of the Franco Foundation. Last June, the plenary session of the CGPJ approved, divided (15 votes in favor and 6 against), a report that questioned the possibility of extinguishing this foundation on understanding that “the exaltation or apology of historical facts, however painful or reprehensible” that They were, it fell “within the scope of protection of freedom of expression”, except when they imply “an injury to rights or property of constitutional relevance”. The text that the Government will finally take to the Cortes tries to shield the elimination of a foundation such as the one that bears the name of the dictator Francisco Franco, adding, when speaking of the cause of extinction, that the apology and exaltation of the coup, war or Franco dictatorship or the glorification of its leaders “with contempt and humiliation of the dignity of the victims or incitement to hatred.” The president of this foundation, Juan Chicharro, assures that it is an attack on “freedom” despite the fact that he defends a period where it did not exist, the dictatorship, and threatens to fight in the courts.

Withdrawal of symbols and penalties. The 2007 law contained a single article on Francoist symbols – now there are seven and the toponymy is included – and did not establish penalties for non-compliance – now fines of between 200 and 150,000 euros are proposed, depending on the severity of the offense. “Very serious” are, for example, those that imply transferring the remains of victims without authorization, destroying memorials – they are often damaged – or calling for acts contrary to the law that humiliate the reprisals and their families. who orders them. Failure to remove Franco’s symbols and vestiges is considered a “serious” offense.

Valley of the Fallen. Bolaños, who led Franco’s exhumation operation, explained at the press conference that the Foundation of the Santa Cruz del Valle de los Caídos, created by a Francoist decree of 1957, “contrary to the Constitution”, will be extinguished. Any mortal remains that occupy a prominent place in the compound will be relocated. That, once Franco’s remains have been transferred, affects the grave of José Antonio Primo de Rivera, next to the altar. The Government will give the family the option of taking him to the crypts where the rest of the victims lie or to another place they want.

Withdrawal of noble titles. The minister has also explained that the titles of nobility granted between 1948 and 1978 that represent the exaltation of the Civil War and the dictatorship will be withdrawn.