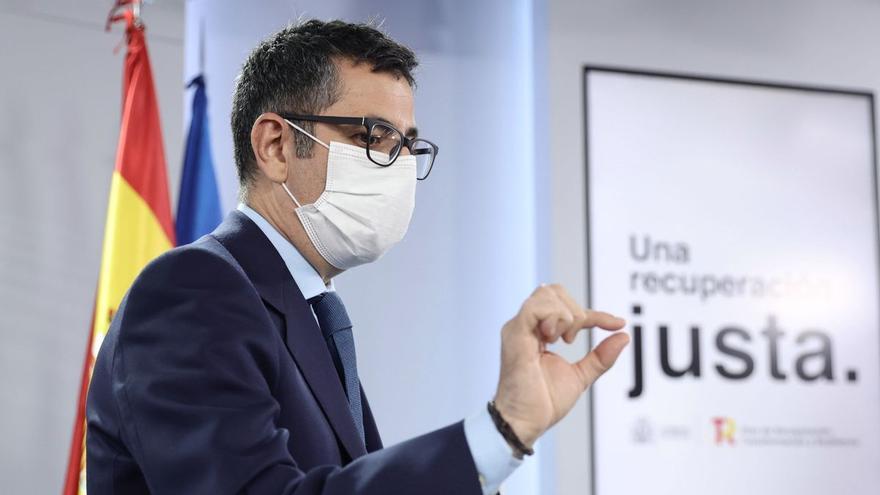 The Government still does not have enough votes to validate the labor market reform law decree in Congress. He still has weeks ahead of him to convince the groups, but for now he is sending them a very explicit message: “To vote against the labor reform is to vote in favor of the 2012 reform”, which was dictated by the Executive of Mariano Rajoy . A “brutal” reform against the workers, “imposed, one-sided and absolutely unbalanced.”

On Monday, the president, Pedro Sánchez, ordered the members of his executive and the party’s spokesmen and their ministers to teach the text agreed with the social agents. This Tuesday, the head of the Presidency, Félix Bolaños, did that job. He defended the benefits of the norm, of a “agreed” and “balanced” law, that gives “legal certainty” and “certainty” and that is the result of the agreement of employers and unions, because they are the protagonists of labor relations, and they are the ones who should lead the way, he argued.

Therefore, “it is a rule to which most groups have to naturally join,” he continued, and especially the usual partners. “And those who do not join will have to explain why they are not joining a labor reform that improves the conditions of workers and that also improves the situation of companies, and in that context we face negotiation, there is still time ahead “. At the latest, the full debate to validate the decree must be held in the first week of February.

Bolaños said that he will have contacts with all the groups – the Second Vice President and Minister of Labor, Yolanda Díaz, will also have them – although he will start with the left-wing allies. They will be conversations, he advanced, “discreet”, to ensure they are “effective”.

The PP confirms its vote against the labor reform and has not received a call from the Government https://t.co/ANUYDQjuex pic.twitter.com/FxyvaL3j9q

When the minister was asked if the Executive is willing to carry out the validation with Ciudadanos (an option that disdains the purple wing of the bipartisan), Bolaños insisted that contacts with the parliamentary forces will be opened to convince them of the relevance of a labor reform “very positive”. The government’s culture is that of “dialogue” and that of “talking to everyone,” he wielded, to reiterate the warning: “I find it hard to believe that there are progressive formations that are going to vote in favor of the 2012 reform. […], which in the words of the ministers of that Government was a brutal reform against the workers. “The progressive forces, he pointed out, should “support” the initiative, the same as those that have “a sense of the State, a sense of responsibility and common sense”, because in the Government’s opinion it is not possible to oppose a text that has already been agreed upon by employers and workers.

Precisely for this reason, the negotiation margin is “none”, sources from the Executive later insisted. The contacts, therefore, will be oriented to the fact that the decree is validated as it is and is not processed as a bill so that amendments can be introduced. In other words, the Government does not want modifications to be approved, because “any minimal change” could “unbalance” the agreement reached with employers and workers.

Precisely, the PSOE spokesman in the Congress of Deputies, Hector Gomez, pointed out this Tuesday that the Government will speak with all parliamentary groups with the will of get “majority” support to validate the labor reform without changes, as it was agreed with the employers and the unions. “If we have been able to reach an agreement with unions, with companies, what we have to do in the Congress of Deputies is to support it because it is a notable advance, it is an advance towards the modernization of labor relations in our country, we cannot continue anchored in (the labor reform of the PP of) 2012 with deficiencies “.