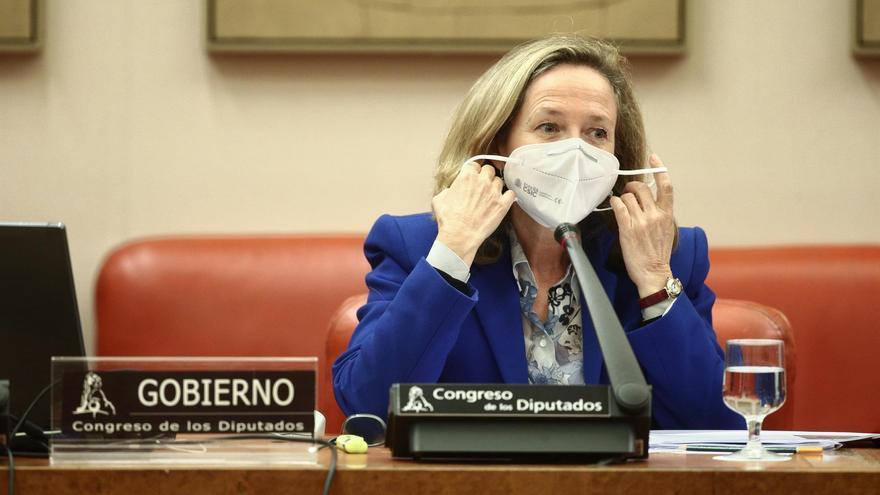 The Second Vice President of the Government and Minister of Economic Affairs and Digital Transformation, Nadia Calviño, has confirmed that the Government will revise its current growth forecast for 2021 downwards as a consequence of the adverse impact of the third wave of the pandemic, which slowed the recovery during the first quarter of the year, although it has expressed its confidence that Spain will register “a very strong rebound” in the second half.

“We left behind a tough first quarter, which is the main reason why we are going to lower our forecast for this year, in which we anticipated growth of about 7% and it may be smaller, “explained Calviño in an interview with Bloomberg TV.

However, the Minister of Economy has stressed that in March a very rapid improvement was appreciated and all the indicators point to a positive evolution, while he has been optimistic about the development of the vaccination process in Europe.

“We think that the second quarter will be a transitional quarter and that we will have a very strong rebound in the second half of the year,” he said, recalling that “that is something that everyone expects,” after this week the Monetary Fund International (IMF) has revised up its forecasts for Spain, to a GDP growth of 6.4% in 2021, the highest among advanced economies together with the United States.

In this way, Calviño has expressed his confidence that On May 9, the state of alert in Spain will decline, which will probably mean the lifting of movement restrictions in the country and a change in the dynamics of tourism.

“I have always said that the most important economic policy now is to vaccinate, vaccinate and vaccinate,” has indicated.

On this issue, the Vice President stressed that in Spain the vaccination plan is being fulfilled and the first dose has already been injected to about 6 million people, about 13% of the population and is on track to reach 70% by the summer.

On the other hand, the vice president has disagreed with the IMF forecasts on the evolution of unemployment in Spain, which would continue in 2026 still above the pre-pandemic level, and has expressed its confidence that Spain will be able to reduce unemployment more quickly than the international organization anticipates.

“I do not agree with the approximation made by the IMF in its unemployment rate forecasts for Spain. Thanks to the measures adopted in March of last year, we have had a labor market dynamics very different from previous crises. We think that we will be able to reduce the unemployment rate faster than the IMF anticipates, “he said.

However, it has recognized that high unemployment in Spain is one of the inequalities that have hampered the country’s growth for decades, despite various reforms carried out, for which it has underlined that the recovery plan offers a good opportunity to change some elements to undertake an ambitious labor reform.

Fortunately in the Government we are very clear about the need to carry out a series of reforms in parallel with investment, as well as the importance of reaching agreements with social agents to have strong, but also sustainable growth, he pointed out.