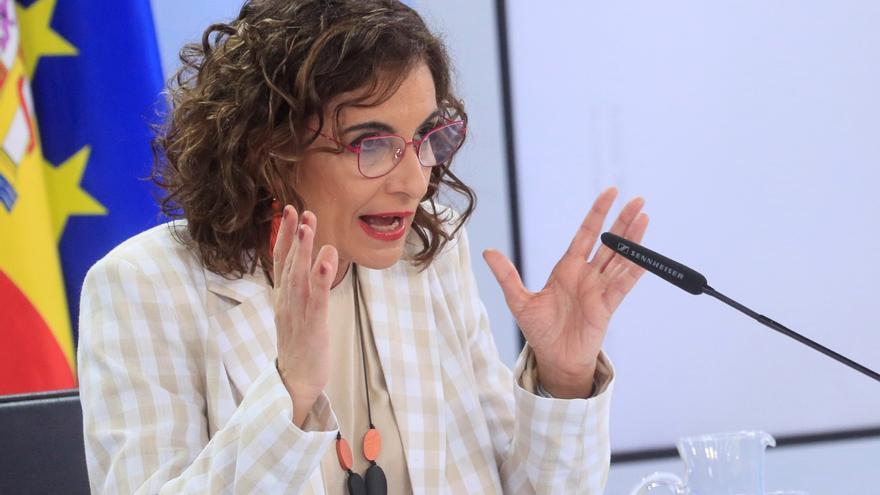 The Government will be guided by the “general interest“When deciding on pardons for the 12 offenders of the ‘procés’. That is, the political aspect will prevail, to what extent it can help the objective it claims to pursue, the” reunion “between Catalonia and the rest of Spain and among the Catalans themselves. That goal of “reunion“He will also be present at the second meeting of the dialogue table, still without a date, but which the Executive wants to activate as soon as the new Government formally requests it. An appointment that, logically, will be preceded by an interview between the president and Pere Aragonès, as this one pointed out this Monday.

The Coalition Cabinet abides by the maxim of prudence for an extraordinarily sensitive issue mediated through the legislature and that may completely break the bridges with the opposition. The spokeswoman, María Jesús Montero, in the press conference after the Council of Ministers – which was chaired by the first vice president, Carmen Calvo, due to Pedro Sánchez’s attendance at the extraordinary European Council in Brussels – avoided giving too many details of the Executive’s intentions just a day after the new ‘president’ takes office and at the gates of the Supreme Court issuing its mandatory report, although not binding on the 12 convicted of the ‘procés’. Opinion, therefore, imminent, and which will foreseeably be negative, as was that of the Prosecutor’s Office.

However, Montero did give some clue as to what the Government will value when it has to make the decision. To the direct question of whether it will assume the political cost of granting the grace measure even with two negative reports -a very exceptional fact-, the spokesperson replied that the Executive “will always ensure the general interest, and there is nothing to comment on. because there is no decision taken since the corresponding documentation has not yet arrived [del Supremo] so that the Government, calmly, can analyze it. “The head of the Treasury pointed out that,” when the appropriate moment arrives “, what was agreed upon by the Council of Ministers will be communicated” with transparency “, with” the reasons “that have illuminated it. , “in whatever sense they are.” “But we will always do what we consider to be best for the interest of Spain, complying with current legislation, and with all guarantees, “he concluded.

The spokeswoman disassociated the resolution of the pardons, which is presumed for the summer, after the Andalusian PSOE primaries, from the dialogue table. “They go the other way, in application of current legislation, “he insisted. Sánchez, who will have the last word, will decide accordingly after the Supreme Court’s report.” What the Government does believe, and has been promoting, is the need to resume the ‘Agenda for the reunion ‘with Catalonia “, which the president already offered to the Government in February 2020. Moncloa wants to channel this dialogue” basically “through the table between executives and which has not met since before the first state of alarm. The Government pursues agree on the instruments that “strengthen emotional ties between Catalonia and [el resto de] Spain, and among the Catalans “.

The PP “does not want” to renew the CGPJ

Montero downplayed the sequence that will be staged from now on. Yes he admitted it will be “easier“That Sánchez and Aragonès meet first, because it will be easier for them to square their agendas. In addition, he recalled, the chief executive has always received the regional presidents who have been elected at Moncloa, as happened at the beginning of this year with the Basque Iñigo Urkullu and Galician Alberto Núñez Feijóo. The Executive understands that it must be the Government who requests a new convocation of the dialogue table, since Sánchez has always shown his “predisposition“to a second meeting, but this was impossible due to the pandemic and because of the discrepancies between ERC and Junts when Quim Torra was at the head of the Generalitat, who never believed in that instrument that the Republicans demanded to invest in the socialist leader.

Also Read  Virginia repeals the death penalty and joins 22 others from US states.

The Government, therefore, believes that dialogue is “more necessary than ever“and he wants it to be resumed” as soon as possible “,” regardless “of the interview between the two presidents. Now, Montero said, this dialogue has”limits“, and it is respect for the Constitution and the law. That is, it will not give in to the independence claim of amnesty and a self-determination referendum.

The PP has already launched the message that if there are pardons there will be no renewal of the General Council of the Judiciary. According to the spokesperson, it is nothing more than a new one “excuse“, because it always ends up” subordinating “its endorsement to the” day and depending on the current political situation “.” The reality is that they do not reach an agreement because they do not want to“,” They consider that non-renewal is the best of their possible options, “Montero continued. The governing body of the judges has been in office since December 2018, and was elected in 2013, when the PP enjoyed an absolute majority and, On the other hand, it did not modify the law to elect its members, the norm, in fact, has been the same since 1985.

“What seemed good to him before and never questioned serves as an excuse,” insisted the spokeswoman, who accused the popular of “blackmailing” in the negotiation with the Executive, when what is on the table is “compliance with the Constitution “, and this “forces” the renewal of the CGPJ after five years in office.

The Government opened a parallel path of detente with Catalonia by announcing a future reform of the Penal Code to lower the penalties for sedition, with the argument that the legislation had to be adapted to the European standard. But that project remains fallow, blocked, and there are no guarantees that it will move forward. Montero indicated that work is “advanced” but they have not yet reached the Council of Ministers, and it is therefore unknown whether the penalty for the calling of illegal referendums will be included again.

Against Casado’s “anxiety” and his request for elections: “Let him wait sitting down”

Pedro Sánchez has been sending signals, after the debacle of the PSOE on March 4, that he will exhaust the legislature and there will be no electoral advance. But the PP considers the term of president exhausted and wants elections now, based on the latest polls that bring popular and Vox closer to the absolute majority.

“I can understand the anxiety that some have in case the legislature runs out, but I want to remind you wait seated because there is a lot of legislature ahead“, said the minister spokesperson. María Jesús Montero stressed that the value of the polls that are published far from an electoral call is” relative “, especially when political times” are liquid. “And he recalled how in 2018, before the motion censorship, the studies placed Citizens in the first position and today the party is on the verge of liquidation.

The Government, he insisted, is now focused on economic recovery and the vaccination process. And a preview of the generals is not good for anyone, he said, “except for the one who live with that anxiety your own leadership. A very clear slap to Pablo Casado.