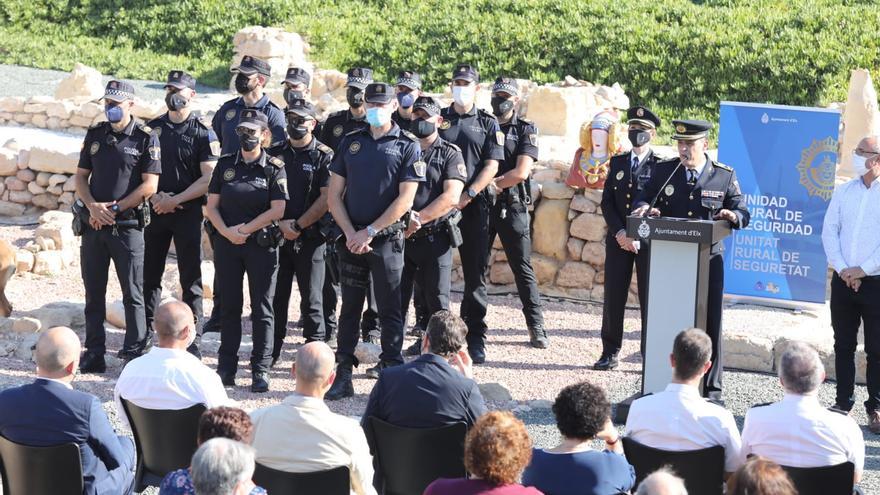 The event, led by agent María José Aranda, was attended by spokespersons for the Political Groups, members of the Government Team and the Municipal Corporation, pedestrians, authorities of the State security forces and bodies and representatives of the neighborhood, agricultural and livestock associative fabric of the Camp d’Elx. The councilor has said that this security provision was created to achieve greater objective security indexes –that is, to prevent the crimes produced– and, also, subjective in the countryside so that “the inhabitants of the districts and rural areas enjoy a clearer sense of security than they have now, feel safe and know that there are teams of the Local Police, the Civil Guard and the National Police Force dedicated to rural areas ”.

In addition, the municipality has stressed that “economic and human resources will continue to be invested, because it is worth the effort to strengthen security in the field.” In this sense, the Rural Security Unit is framed within the Municipal Investment Plan in Pedanías 2020-2023, endowed with 42 million euros distributed in 70 actions, of which more than half have already been carried out. “We are perfectly aware of the characteristics of life in the field, and that they require a specific security strategy adapted to such singularity.”

For this reason, he recalled that tomorrow, in the Local Government Board, the acquisition of new police vehicles will be approved. And he has referred to the latest additions to the Local Police staff, which have allowed the Rural Unit to be launched thanks to the plan of the Security Council, which will manage to add a total of 64 agents between 2020 and 2021. “With 400 agents, we now have a sufficiently sized staff,” said González, who has praised the municipal body: “We have an excellent Local Police, with a degree of professionalism, seriousness, rigor, motivation, interest and very high involvement; some merits that accumulate silently ”.

“Hence,” he continued, “Elche is one of the towns with fewer crimes in the Valencian Community and from Spain, according to the indices and statistics ”. “Fortunately, serious crimes are specific, exceptions to the rule”, although he has recognized that, when the punishable activity affects the countryside, “it causes a great alarm and an intense social impact, something that is explained by the characteristics of the environment.”

For his part, the regional secretary has stated that “the Valencian government he knows that one of the policies of greatest concern is security ”, and that“ things are done well in Elche ”. “Public security”, he continued, “is a fundamental axis with the start-up of units such as Rural, but, previously, of canine groups, drones and the technology available to the Local Police of the Elch Town Halle, given the peculiarities of its territory, which make it the creditor of a quality service ”. Batalla stressed that the recognition of the Elche police “is not accidental”, and that “the Consell, the IVASPE and the Emergency Center always come to Elche to learn.”

César Zaragoza, who has said that “this day is a moment to congratulate us”, has acknowledged that the Rural Security Unit had been on the table since 2018, but that, due to the unexpected process of early retirement of fifty troops and the pandemic , it was not possible to start it until now. Likewise, he has emphasized the subjective feeling of insecurity that exists in the Camp d’Elx and that does not correspond to the real crime data: “There are more crimes in the urban area than in the countryside. And that subjective feeling is not fought with more police, but with a communication plan and strengthening ties with neighborhood groups, a phase in which we find ourselves ”.

The Rural Security Unit, as well as other specialized endowments of the Local Police, in addition to the existing coordination with the Civil Guard and the National Police, “are an important deployment that have made Elche a safe municipality,” said Zaragoza, thanking the mayor and to the councilors of Citizen Security, Districts and Rural Development “their effort to make this Unit a reality.”

Finally, Carlos González has shown his gratitude to the work of the pedáneos, since Neighbors Alert, “A group that arises with the purpose of articulating citizen collaboration in the field for the sake of security.” He has also sent a message to the agents of the Rural Unit –and, by extension, to the rest of the State security forces and bodies–: “You have a relevant professional challenge ahead of you, working so that the residents of the districts and rural parties feel safe. We trust you; and we will all work together to make Camp d’Elx a safe place to live ”.