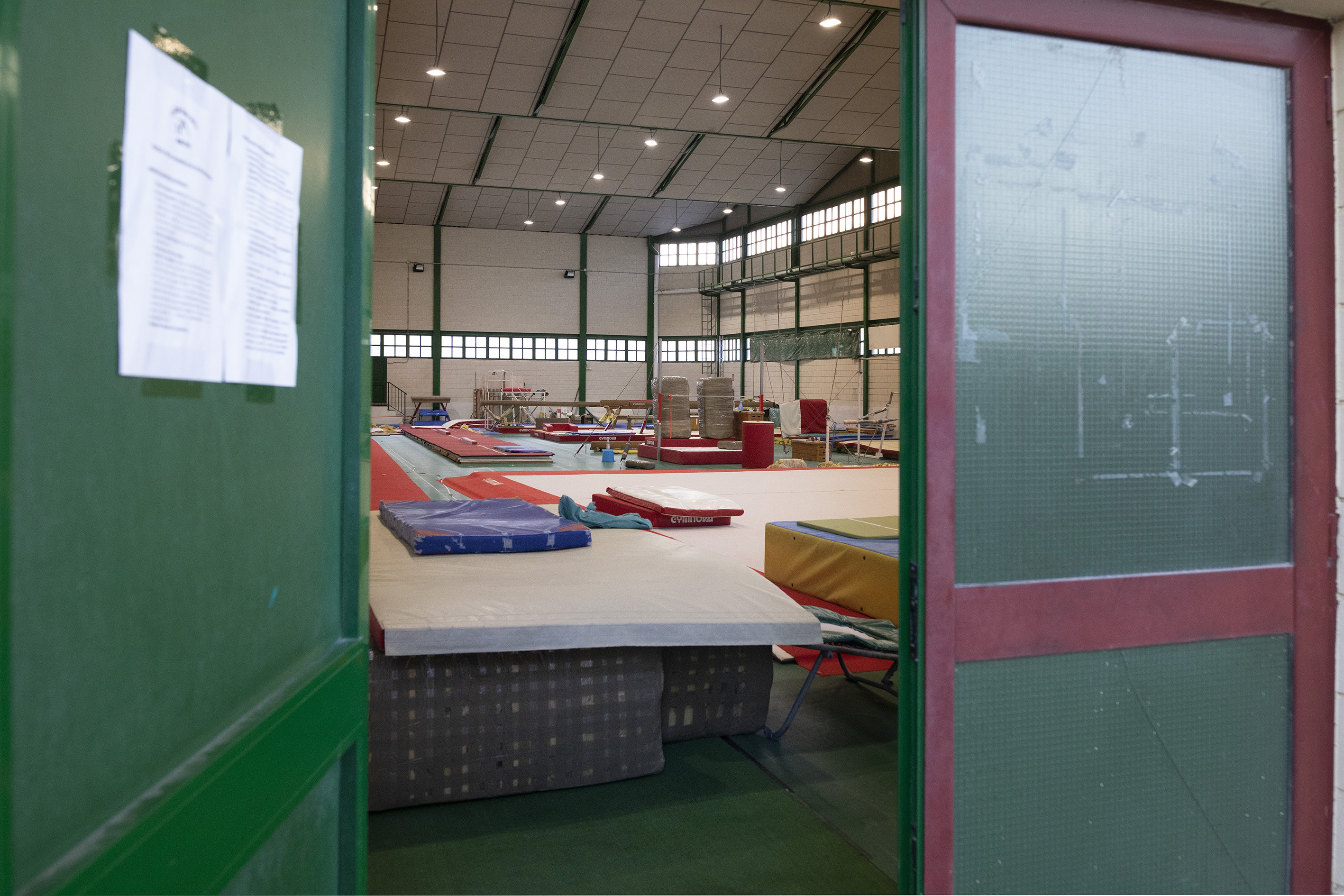 “You’re crazy? You will not believe that I have touched the girls’ boobs! ”. This is what Carlos Franch told the parents of three minors from the Club Gymnàstic de Bechí (municipality of 5,700 inhabitants of the province of Castellón) when on May 25, 2017 they asked him what was happening and warned him that he was leaving the girls (it was their coach) or they were going to report him. Finally, they denounced him for alleged sexual abuse and on June 15 of that year he entered jail (in which he was until last May with a two-month release in 2018).

They are crimes for which the prosecutor has requested 22 years and six months in prison and the private prosecution 25 (adds penalties for unjust harassment). The trial has been held from Tuesday of last week until this Wednesday in section 1 of the Provincial Court of Castellón and has been seen for sentencing. Franch is 63 years old. He was hardly seen raising his head on trial days. For 31 years (until his arrest in June 2017) he was an artistic gymnastics coach at the Gymnàstic club, for girls between 6 and 17 years old and, at the same time, janitor at the Bechí municipal sports facilities.

Five of these gymnasts (some on the radar of the Spanish team and previously selected by Lucía Guisado to enter the High Performance Center in Madrid) have denounced the coach for sexual abuse when they were minors. There are seven more who report having suffered the same abuses but in earlier times, so the facts have already prescribed. Their testimonies, however, allowed to pull the thread. According to the letter of the prosecutor, Carolina Lluch, the accused, “taking advantage of his professional prestige due to his status as a qualified coach and his status as custodian of the municipal sports facilities and in accordance with a preconceived plan, subjected the minors to a type of massages to satisfy your sexual instinct and your lustful desires ”. Those massages were given on a stretcher, on a mat on the training ground and on the couch at home.

“They are not isolated massages, they are sexual type massages. No intimidation or violence; but prolonged in time and with total impunity ”, describes Lluch, who denounces the relationship of superiority between the coach and the gymnasts, a relationship of fear-respect in which those feelings are confused with admiration. Qualifies the accused as “the sheriff from the sports center ”, because what he said was done there and if any of them were against him“ he had all the ballots to spend the afternoon going up and down the stands ”.

On some occasions he insulted and ridiculed them in front of his colleagues (“you are a fat woman, an asshole, a useless one, without me you will not be able to compete, we are cow poop”), imposed individual and group physical punishments and generated a strange relationship of dependency for which athletes do not want to fail their coach. For fear of being pushed aside or excluded, they fold and keep quiet. They have even testified that it “was hell.” According to the prosecutor, the decision-making capacity was annulled: “If he decided there were massages, then there were.” One of the parents reported that their daughter left the sports hall crying every day. Why didn’t you say it before? It was the culture of silence that the coach instilled: “What happens in the gym, stays in the gym.”

The defendant paid the club fees to one of the minors, from an unstructured family, took her to and from training sessions and even bought her plane tickets to travel to see her family. The dependency, in addition to being emotional, was economic. “If it hadn’t been for Carlos, I wouldn’t have been able to practice gymnastics. He was like a father to me, he was the only person who cared about me ”, declared the gymnast. According to the brief of the private prosecution, the coach – who does not have a physiotherapist title, so he is not authorized to give massages – took the minors (individually) to a room known as “the lamp room” with the excuse of massaging the twins and the solos.

Sometimes he would lock the room (he had them because he was the concierge and he could also access the facilities outside of training hours). He made each girl take off her shoes and put on a special sock that he gave her and, lying down or sitting on the stretcher, she brought the minor’s foot to her genitals and rubbed herself “until she obtained her sexual satisfaction.” The sock, according to the testimony of the minors, “in most cases ended up wet.” Some of these massages were performed, according to the complaints of the minors to the Civil Guard, at the home of the accused and in the presence of the others. It was not uncommon for the coach, with the permission of the parents who, oblivious to everything, trusted him, to reward them on vacation with movie sessions at home.

When the events occurred, the gymnasts were eight years old, the youngest and 19 years old. Of the five, three were still at the club when they reported the events in June 2017. In August they were fired. The first minor who complained did so after telling her parents that she was receiving strange massages from the coach. A few days later, they received a visit from a former gymnast from the same club, who was then over 30 years old and who had heard that someone had filed a complaint of abuse against Carlos. She told them that she had also suffered from them when she was younger. He told them that he had been in the Civil Guard and had also denounced. With the difficulty of reporting events like these.

In his case, there was more than massage: “sex” for three years (from 14 to 17), until he left the club. Being a minor, it is not about sexual relations but about sexual assault. With this second complaint, the Civil Guard tracked if there were more victims. They met 12 and in two different generations, without one having contact with the other. The magistrate who issued the sentence did not want to hear the testimony of any of the seven majors in the oral trial because he considered that the crimes had prescribed (they did testify during the investigation).

In the case of Miguel Ángel Millán, the athletics coach sentenced to 15 years for sexual abuse, the athletes whose crimes had been prescribed were also heard. On the last day of the trial, that sentence was cited and the prosecutor came to classify these events as “similar, analogous, and almost identical” to those suffered by the Bechí girls. It is not the first time in Spain that underage gymnasts suffer sexual abuse: in 2013 Gloria Viseras denounced the then coach Jesús Carballo for abusing her when she was a minor.

Franch, whose license was withdrawn by the Valencian Gymnastics Federation when he was arrested (but did not open an investigation when he learned of the complaint of the minors, nor did the Spanish federation, despite the fact that since 2013, the protocol of prevention, detection and action against harassment and sexual abuse), denies the facts. “I am totally innocent; the massages have never been given clandestinely, ”he said on the last day of the trial.

He recognized the psychologist Julio Bronchal, according to the defense’s expert report, who performed “different types of massages on minors”, but the idea of ​​associating him with any sexual activity seems “perverse and twisted”. The coach considers himself, according to that report, “a victim of he does not know if a misunderstanding caused by a girl who wanted to justify not continuing with gymnastics and did not know how to confront her parents, or a slander that has been shared in a social environment very sensitive to these issues ”. He speaks of “lies and falsehoods”, and confesses that “the only certain thing” is that he was holding the gymnast’s foot between his legs. “As it is also true that I have an inguinal hernia and that, by imagining and sharing versions, any object – keys, the edge of the bench – could well be mistaken, from malicious intent, with my sexual organs.”

The conclusion of the psychologist is that in the evaluation he carried out at the request of the accused “there are no behavioral traits of sexual violence or behaviors typical of an abuser.” It also adds that the “accusatory basis is based on sensations perceived by the complainants circumscribed to the perception, with one foot, of a hard object, attributed to the alleged erection of the coach’s penis […] without considering alternative hypotheses: another object, the proven scrotal inguinal hernia, etc ”. The forensic expert explained that a hernia is “a lifeless mass that cannot change its consistency.”

In the other expert defense report, signed by a general practitioner, Dr. Miguel Serrano, a physical preparation manual from 1980 (discontinued) from the University of Guayaquil and a video appears as proof that the massages were performed correctly. from youtube titled How to give your child a relaxing leg massage.

From jail to two tournaments and to jail again. Carlos Franch was in provisional prison from June 15, 2017 to March 23, 2018. The judge released him on the condition that he could not enter Castellón and sign every Monday in the court of the domicile he chose (Sagunto was the What did he choose). A month after leaving, she appeared at an artistic gymnastics tournament in Pamplona with Lucía Guisado (national coach) and went down to the track with the minors. The Civil Guard opened an investigation and warned the judge that an investigator for alleged sexual abuse of minors continued to attend sports tournaments. For this reason, and for going to another championship the following weekend and signing on one day and in a court that did not correspond, he returned to provisional prison.