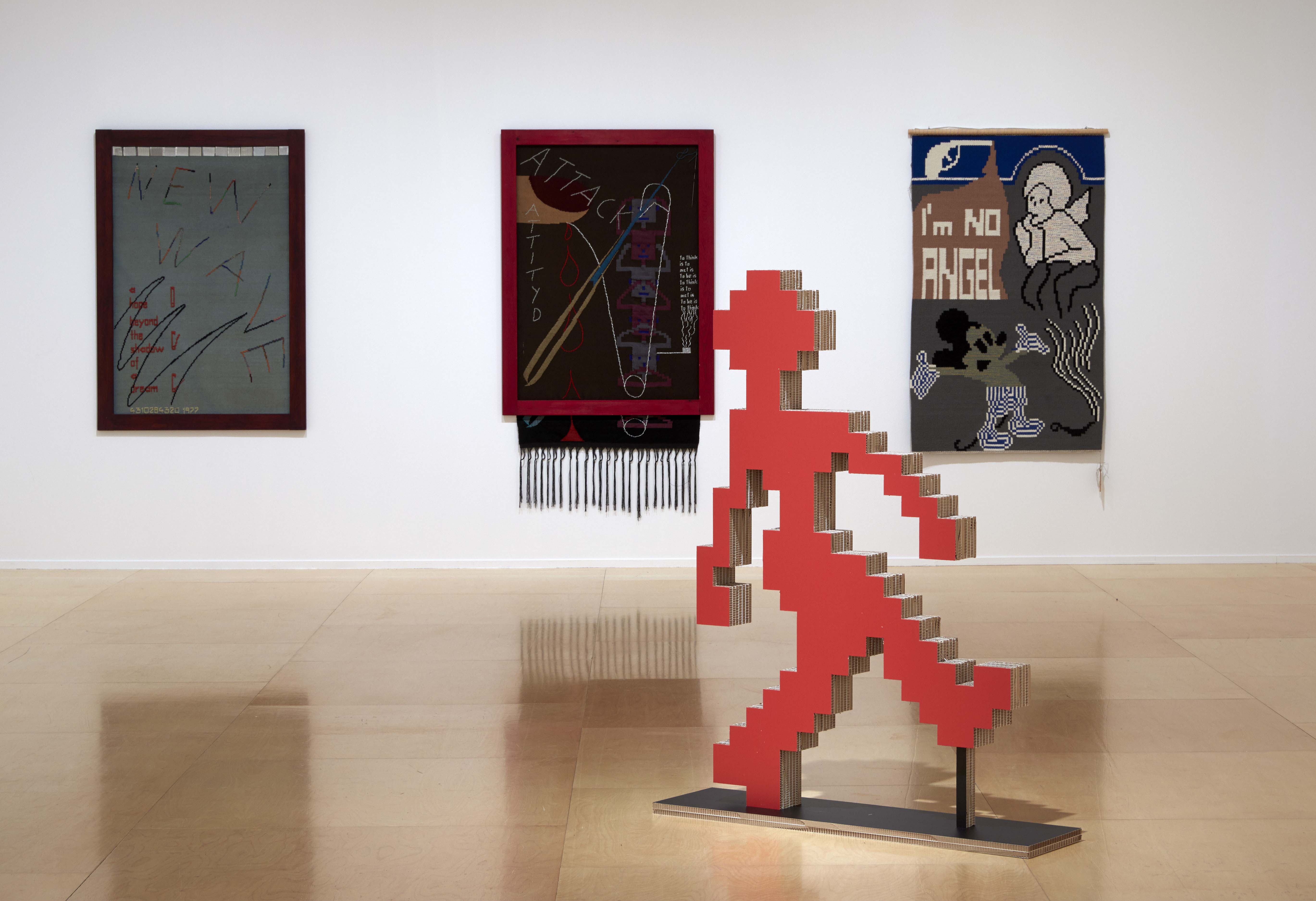 Charlotte Johannesson’s exhibition (Malmö, 1943) could be a metaphor for what it has meant to be a woman in the history of art in the last half century, beyond her privileged condition, inhabitant of the so-called first world, Nordic, self-taught, punk, feminist, a mysterious redundancy. The Queen Sofia discovers for the Spanish public this Swedish author with a powerful physique, a mix of Björk and Hanna Schygulla, with a work capable of adding more strangeness to the aura that lately surrounds applied textile art, in this case guerrilla graphic art combined with the incipient digital programs of the first microcomputers.

Take me to another world gathers 150 pieces, including prints, tapestries and projections; some are reproductions of disappeared works and there are 15 new works that the author calls “woven digital graphics”. The public will find in them a Protestant temperament, if we talk about religiously preserving the chaos of themes that are usually represented in textile art, from gods, angels and heroes to pop and sports idols, comic characters, space rockets, heroines, cyborgs and animals on the warpath.

Johannesson’s preoccupation with the silhouette on pictorial backgrounds almost always flat, the colors and the discontinuous spots maintain the superficial and insist on the artificiality of the art, as a 19th century painter would do (Manet?). They are sketches presented as a result of the technological chimera and, even so, very persuasive because they propose a nostalgic confrontation with our universal imagination.

In the tour of the three rooms of the Sabatini building we see a disciplined confusion of motives. At first it seems overwhelming, but we will get to know and recognize each image: the pixelated Mickey Mouse and Snoopy, Beuys, Reagan, Bowie, Ulrike Meinhof, marijuana leaves and world maps left in a digital bloom. They are images of mass culture distorted / transmuted in the cybernetic mirror. It is then that we need to know something about the past of this artist, because that is where the fun lies, to discover it directly from the source, to look at the tapestries with their preparatory drawings like someone entering a small factory workshop; in Johannesson’s case, a real room of his own. In other words, it is a good idea to enter the exhibition with a clean mind and the certainty that each artist creates their precursors. Johannesson’s is Swedish-Norwegian anti-fascist activist Hannah Ryggen (her work was featured in Documenta 13), a Puritan carpet weaver who raised sheep and dyed wool from local plants in the 1930s and 1940s. plays. What follows is the most important critical question, revealing where the importance of this work lies, and part of the answer lies in the ebb and flow of its trajectory, that becoming carried away by dolphins, that of a technological nymph that always recovers the analog remains that he has left on the shore.

The artist began weaving images with hemp fiber where she included slogans and protest motifs, a kind of memes with social criticism. Later he used the computer in a few years in which neither the loom nor the digital medium were integrated into the discourses of the fine arts. Being a woman artist who worked with machines unwittingly made her countercultural. Also the fact of sharing self-managed spaces, such as the one he created with his partner Sture Johannesson, the Atelier Cannabis, and the digital theater Digitalteatern, the first digital arts laboratory in the Nordic countries, where they worked with the first mass-produced personal computers, the Apple Plus II. The pre-technology method, which used punched cards with binary codes, was no different than the screen with a resolution of 280 × 192 pixels, about the same number of threads that a loom can contain. The history of the computer was concentrated there, from the images produced in weaving, which dissolve into points that are combined into threads that in turn are combined into patterns or images not very different from the pixels on a screen, based on mathematical processes. .

Johannesson has only needed to explore the neuronal hypertelarity, on our screens and in our brain tissues. The point is that the computer chips, at full capacity in any of our devices, are already drawing the picture of our thoughts and desires.

‘Take me to another world’. Charlotte Johannesson. Reina Sofia Museum. Madrid. Until August 16.

Also Read  AstraZeneca's sales of the Covid vaccine tripled to $ 1.2 billion in the first half of 2021 | AstraZeneca