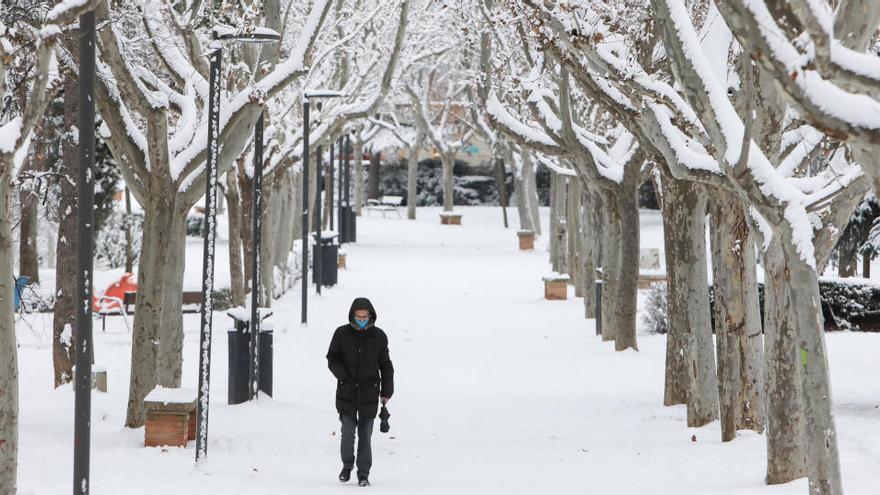 The storm ‘Filomena’ will leave historical records and it will cover an extension of snow between now and Sunday “unprecedented so far this century”, according to the State Meteorological Agency (AEMET), which has also predicted that as of Monday an anticyclone will be installed on the Peninsula that will still cause colder, so the conditions could exist to talk about the first cold wave of 2021.

AEMET spokesman, Rubén del Campo, explained to Europa Press that the storm caused by ‘Filomena’ already this Thursday resulted in “very low” temperatures in the interior of the Peninsula, with “very significant” frosts in the network of stations, with almost -18 degrees centigrade (ºC) in Reinosa (Cantabria).

Thus, it summarizes that although the snow appeared in the Cantabrian mountain range, it had its greatest presence in the southern plateau and reached the interior of Murcia, the eastern end of Andalusia, Castilla-La Mancha, Community of Madrid, in points of the province of Albacete.

This Friday, temperatures remain low, especially in the northwest of the Peninsula, such as in Villablino (León) and Palacios de la Sierra (Burgos), with -14.9ºC this morning, and with widespread frosts in other parts of the Peninsula , although in the center and north the atmosphere has been somewhat more temperate and in Andalusia frosts have hardly been registered.

Precisely, Del Campo has stressed that “the most adverse part” of the storm arrives this Friday because ‘Filomena’ continues to approach the Peninsula and driving temperate winds from the Mediterranean that come into contact with the cold air previously accumulated, which will lead to “copious snowfalls” that can be a “very adverse” phenomenon on Friday and Saturday.

Snow will fall especially in southeast Castilla la Mancha points of the Region of Murcia, inland of the Valencian Community, in some areas of the extreme northeast of Andalusia and from all this area the snow will continue advancing towards the north.

The spokesperson points out that at the end of the day the storm affects “practically all” of Castilla-La Mancha, to the Community of Madrid, to the south and east of Castilla y León La Rioja Navarra, interior of the Country, Basque, Aragon and interior of Catalonia. Thus, he insists that the central zone and La Mancha will be the most affected areas, since it will be snowing for “more than 24 consecutive hours”, which will leave accumulations of “very important” snow.

In fact, it has indicated that there are notices of important risk (orange) in most of the interior of the peninsula this Friday and Saturday and even of extreme risk (red “) in Toledo, Cuenca, Albacete, Guadalajara and Community of Madrid, specifically in the Henares corridor and in the southern region of the Tagus and in the west. “For these areas it is the first time since the warning system began that the red level has been activated,” said Del Campo, who hopes that more than 20 centimeters of snow can accumulate in these areas in 24 hours.

“It is a very significant amount, which will undoubtedly cause effects and impact on daily life and in mobility “, has valued.

The spokesperson has added in some areas of the Iberian system and in the Ebro valley More than 30 centimeters of snow could accumulate in one day and blizzards will also appear that will lift the snow off the ground and could cause greater accumulations of snow even on slopes and slopes and urges to be “very careful” with this phenomenon, which also decreases dramatically. considerable visibility.

“These may be the most extensive snowfalls in recent years and in areas such as the capital Madrid, we are very likely to be facing the most important snowfall of the 21st century,” added Del Campo, who added that for the city of Madrid we would have to go back to the snowfall of February 1984 or to that of March 1971 to find a similar precedent if the forecasts are met.

In any case, it insists that its extension will be “without a doubt” one of the greatest of the current century, since the extension of land covered with snow at the end of Sunday will affect practically the two plateaus “in its entirety, within the Cantabrian communities, Aragon, Valencia and Catalonia and areas of eastern Andalusia and eastern Extremadura.”

That is why he concludes that it will be “probably the most extensive snowfall of the century” and in terms of intensity has highlighted that it is the first time that the red warnings (extreme risk) are activated in Castilla-La Mancha, interior of the Valencian Community, south of Aragon and Community of Madrid since it is “very unusual” for more than 20 centimeters to accumulate in these areas in one day.

“It is a very adverse and exceptional episode, so we would have to go back to 40 or 50 years ago in Madrid to remember something similar. If the forecasts are met, it will be one of the great historical snowfalls “, has sentenced.

Specifically, it specifies that the showers will be stormy and locally strong also in large areas of the Mediterranean coast and the Balearic Islands, and that the wind storm in the Canary Islands, with gusts that can exceed 90 kilometers per hour. Strong and persistent showers will also occur in the Canary archipelago.

In short, it concludes that the weather will be very adverse on Friday and Saturday, when very low temperatures and frost are expected “practically widespread” in the interior except in the southwest of the peninsula and a very cold environment during the day.

Regarding Sunday, Del Campo expects that the showers will be locally intense in Catalonia and that in Andalusia and the Balearic Islands it will continue to snow at low levels, above “only” 200 or 300 meters in the Cantabrian mountain range País, Vasco, Navarra, La, Rioja, Aragon, Catalonia. It may also continue to snow, albeit weaker, in other points in the northern half and central area.

However, the situation will tend to stabilize which does not mean that the cold will disappear. Del Campo has announced that an Atlantic anticyclone will approach that will stay in Spain “a few days” in which it could cause a “cold wave” that takes the minimum temperatures to -8ºC in provincial capitals of the two plateaus and Teruel.

In the Canary Islands next week the showers will continue, especially in the north of the islands of greater relief.

Thus, after the accumulated snow, the cold will make it stay on the ground, which will be cooled more by this snow, and the skies will be clear and the wind calm which will lead to “very suitable conditions” so that the generalized frosts especially in the two plateaus, where it will fall clearly of the five degrees below zero “at least between Tuesday and Thursday”.

Finally, it has defined a “long list” of cities that will have very cold temperatures and below -7 or -8ºC, which are the minimum expected for capitals such as Valladolid, Palencia, Burgos, Soria, Salamanca, Teruel, Cuenca, Albacete Toledo or the city of Madrid.

“There is the possibility, therefore, that next week the thresholds that allow us to speak of a cold wave in our country are exceeded “, predicts Del Campo.