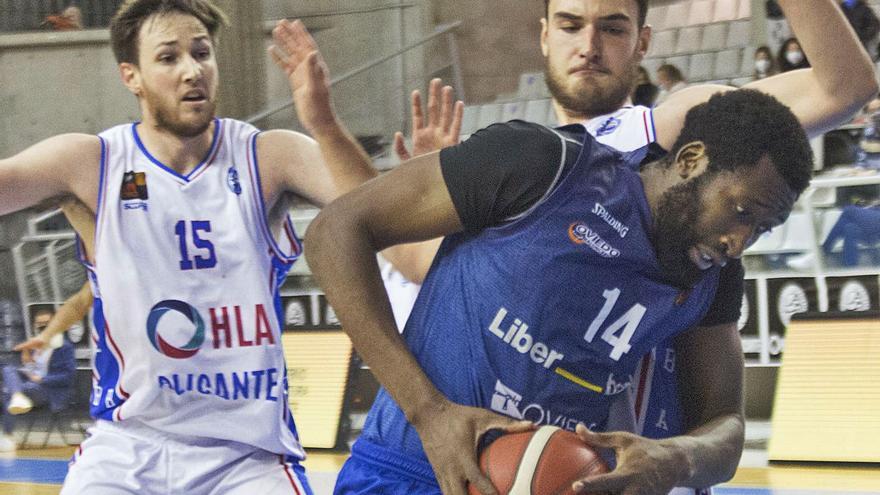 HLA Alicante lick their wounds after their bittersweet debut in the league for the “play-off” for promotion to the Endesa League, in which they fell with honor in extra time against a combative Liberbank Oviedo (84-85), but recovered the essences that seemed lost in recent weeks: those of an intense, fierce and proud team, which lifted in two minutes a game that it had lost and did not win it in the end due to lack of precision in the shot. Lucentum was 37% accurate in field shots, 10 points below their season average. An excessive burden in a match that was decided by millimeters in an agonizing end. Coach Pedro Rivero congratulated himself on the reunion of his team with himself in the spirit and fighting spirit aspect, he especially embraced the point guard Justin Pitts at the moment of lack of confidence that the American is going through and is already working to improve the precision of the yours in the next match, next Friday (19.30) again at home against the powerful Leyma Coruña. “It is difficult to assess it because there have been many games within it, but if I am left with something is that the team has returned to being the one with good feelings, pushing,” explained the Segovian coach. “But it’s a shame not to take a game with a chance to win; with three or four shots being three up [en la prórroga], with Justin’s option [Pitts] to end. Now is a complex moment, but I stay with that, “he added after the game.

HLA Alicante only scored eight of the 39 three-point shots they made against Nacho Lezcano’s team, who converted 10 out of 20. Compared to the 34.8% accuracy rate of the season, the Lucentino team stayed on Friday in a poor 20%. The balance improved somewhat for the Alicante in shots of two (51%), but in the general count of field shots, their 37%, 12 percentage points less than the rival, penalized them a lot in such an even duel. In addition, after culminating a great final comeback based on faith and dedication, the team failed in the crucial moments of the clash: the last two attacking actions of regulation time and extra time, as well as several shots when it was three ahead in the extra time. «We are shooting alone and we do not put them. That is part of the fact that there are people having a hard time because things do not work out and we are there to continue working so that they have those shots alone. That later they don’t come in, they don’t come in, but we can’t tell them anything, ”Rivero said. “Where we do have to continue is in this dynamic of pushing and believing all together because it is what there is, what has brought us here,” he added.

“Save Private Pitts” and regain everyone’s confidence in attack

No one embodies the scoring crisis that affects the entire team better than Justin Pitts. The American point guard reached the second phase as the ninth best scorer in the LEB Oro with an average of 13.7 points per game in the regular league. The average kept him on Friday with 13 points under his belt, but his percentages plummeted: he only scored one of the eight triples he tried and five of 12 in baskets of two for a meager 30% in field shots from a much more player. reliable and decisive out of habit. «I don’t usually highlight people, I love all the players a lot, but let it be clear that for me Justin [Pitts] He is a special person », Rivero defended him. «He has been with us since LEB Plata, he has given us everything and goes through a moment of misjudgment, of losing that spark and he has our confidence and that of all the players. We have to tuck him in because he is one of those who brought us here. All in all, Pitts again led the HLA scoring, matched by a notable Urtasun, who also missed from the line of three (one of seven), followed by Galán (12 points and the best percentages), Gjuroski (11), Ortega (8) and Allen (7).

Liberbank Oviedo went 33 times to the free throw line, more than double the 16 of HLA Alicante, to Rivero’s despair. It was the only pitching facet in which the Lucentum beat the Asturian team in success (75% compared to 69%). The Segovian coach also protested the referees’ decision not to signal a technical foul to the visitor Arteaga in the final stages of the match when he kicked the ball after a basket and a foul in favor of the Alicante team. The Lucentino group noted the encouragement of the 150 spectators who were able to attend the Pedro Ferrándiz, waiting for Health to authorize a larger capacity as the incidence of the pandemic can continue to decrease, which now threatens a fourth wave again. Next Friday (19.30) Leyma Coruña visits the Alicante pavilion on the third day of the second phase and predictably on Wednesday 31, at the same time, the third day will also be recovered at home against Valladolid, two other direct rivals.