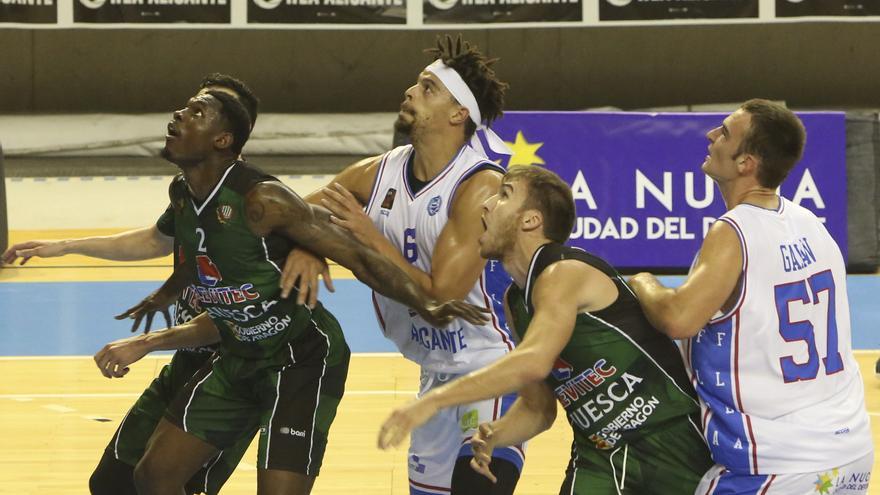 Lucentum does not take pity on any rival, crushes whoever gets ahead and makes it clear that it is a clear favorite for promotion to the ACB. The Alicante team added their fifth consecutive victory of the season, the 14th in all of 2020. The HLA has become an invincible bloc with which no one can. It doesn’t matter having a bad day because the result is still the same. Mercilessly, Rivero’s team maintains its first solo position. Ahead he had an especially weak opponent who only lasted a few minutes of the first quarter when he got 4-12. At that moment it seemed that the match movie was going to be another, but no, it was the same as always. The HLA began to play and pound as the minutes passed. Great match for a Chumi Ortega that drove Huesca crazy and for a whole team that has infinite weapons in attack. Again without Gjuroski, but the Lucentum is not affected by anything. Not even the pandemic. From one season to the next the team has continued with the same winning momentum. The magic of Pedro Rivero on the bench, without a doubt.

HLA played their worst first quarter of the season, but even Huesca was not able to beat them in a very strange first ten minutes. Zohore could not find his place on the court and the Alicante people sinned to end the plays very hastily. Nor was Rivero’s team right from the free throw line. The 4-12 on the scoreboard set off alarms on the Lucentian bench, but the scare ended soon and things began to get in place after several actions by Llompart and a triple from a very inspired Chumi Ortega. The HLA signs an 8-0 run to finish the first quarter with a 12-12 score.

With Jorge Bilbao and Ortega on the floor, Huesca was getting smaller at times. The Lucentian defense handcuffed their rival with actions from Urtasun and Pitts, the set was already 16-1 and a score of 20-13. The dominance of the local team began to be insulting and only the quality of the ex-Lucentino Lafuente prevented the game from being sentenced to rest. Galán and Bilbao did a lot of damage to a Huesca with few arguments in Pedro Ferrándiz. The HLA went the break with a reassuring 34-23. Clear advantage despite the 7 of 15 in free throws of 1 of 12 in shots of three. Lucent’s inside game was key in the first 20 minutes with poor shooting percentages. On the rebound side, the HLA was far superior to a rival with many casualties and few offensive weapons.

The dynamics did not change in the third quarter although the inaccuracies were accumulating in both teams. The party was not brilliant but Alicante’s superiority was notorious. Bilbao continued to be life insurance in an HLA that focused its power on the inside game in the face of the bad day it was having on the outside. Llompart “danced” to the Huesca defense every time he had the ball and the duel entered a quiet phase for Lucentum. With 43-27, Huesca requested a time-out although it was useless because the HLA continued to play at leisure. The game was more than broken although Rivero’s team did not put the brakes on and the difference was widening.

The final room was left over. This is what Huesca would have wanted. The people from Alicante showed themselves in the last minutes against a broken rival who only wanted the nightmare to end as soon as possible.

The Lucentum has become a giant of the category that devastates everyone who gets ahead of it. The leader shows his condition in each game. Next Please.