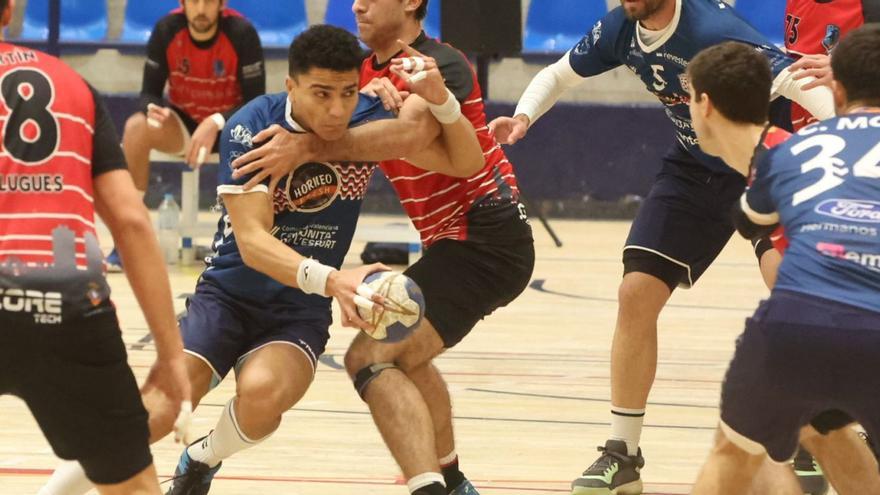 Eón Horneo Alicante defeated Finestrelles SC Handbol Esplugues (26-20) in their first game of the year at home and became leader of the group with 19 points.

The team returned to meet the fans in this 2022 with the aim of giving them a victory after so much without being able to achieve it. And they did. And how. Knowing the importance of the two points, the team went all out. Proof of this was that in the first minute, Cristian Moll opened the scoring. But seconds later, Esplugues, through Josep M. Grau, put the tie in a rebound by Kiko Padilla after stopping a seven meter. Who did not miss his shot from that point, but in the opposite goal, was Matheus to widen the gap.

They say that a good attack always starts with a good defense and there, Pavel was key with great saves. In the same line was the rest of the team in the attack. At ten minutes into the match, Eón Horneo was four up (6-2).

The team from Alicante carried out great actions in positional attack that dismantled the defense of the Catalans. Despite managing to do damage in attack, several defensive errors brought Esplugues closer to the scoreboard. That is why Óscar Gutiérrez requested the first time out with eleven minutes to go.

And it worked for him because Esplugues only scored a little more in the minutes that followed while his team widened the gap even more. With eight minutes to go until the break, Kike Moreno entered the court for the first time in the match and for the first time after the penalty for the Sarrià match in November. The minutes passed and the EON Horneo continued unstoppable in attack and came up six ahead (14-8). However, further defensive errors led the rival to lead 14-10 with two seconds to go.

Also Read  The Falcon and the Winter Soldier: Solid Start for the Latest from Marvel | US television

The start of the second half could not have started better and the score was still up six for our team (17-11). Pavel’s key performances and successes in the defensive line prevented Esplugues from closing the gap.

The minutes passed and the Eón Horneo took advantage of the losses of the ball in the passes of their rival to keep the distance of six on the scoreboard. Kike Moreno was able to do even more damage in a seven-meter shot but the rival goalkeeper, Santos, who came out expressly for the shot, prevented the ball from entering.

The team continued with an aggressive and forceful attack and, in one of those, Juanpi was sent off for a foul on Cristian. It was the last ten minutes of the match and the atmosphere was rising in the match between EÓN Horneo who wanted to close the match as soon as possible and Esplugues who did not cease in their efforts to get closer in the light (22-19). But they ran into the Pavel wall again and again.

In the end, 26-20 on the scoreboard that put the team at the top of the table with 19 points. One more than the second (Barça B). Two points that remain in the Pitiu in the first game of the year at home. Two points achieved thanks to a complete and more solid Eón Horneo in all its lines. With clear ideas in both offensive and defensive play. A change that, as Óscar Gutiérrez says, he hopes will help “the team go further.”

Also Read  Line 12: Two and a half hours to get to work: the Stations of the Cross to get around after the collapse of the subway in Tláhuac

The next appointment is next week against UD Ibiza Handbol Eivissa in another difficult match.