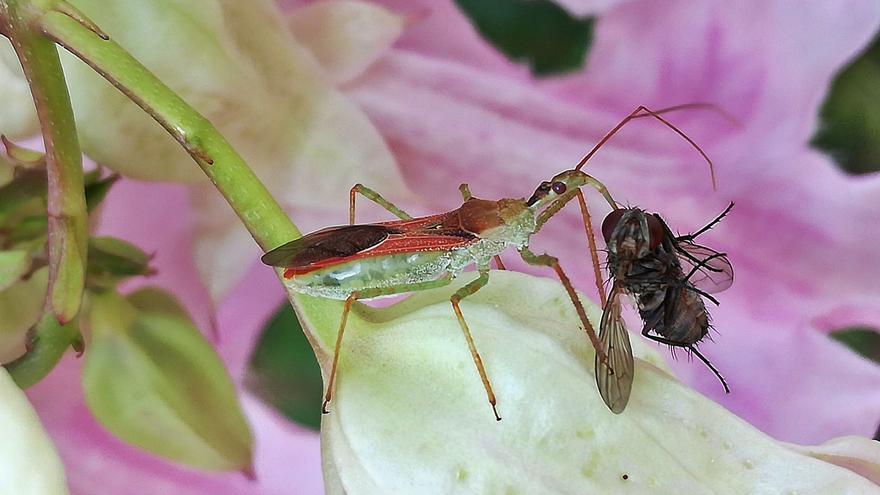 The “hunter” bug The zeal sanguineum is an invasive insect native to arid zones of northern Mexico Y southern United States that has come to the province, like other species, to stay. It stings humans and has undergone a significant expansion in a few years colonizing urban areas of Spain according to researchers Adrià Miralles-Núñez, Carlos Pradera and Juan A. Pujol Fructuoso, from Torrevieja, in a recent study on the advance of this insect. It is spreading in Europe in countries of the Mediterranean basin such as Greece, and in our country its presence is mainly detected in the Valencian Community. The experts also compile and document episodes of bites in different cities, noting that they are increasingly frequent, especially in urban environments, but also in agriculture: it can be found in a wide variety of habitats.

The striking insect is also called bug “killer”, but because it is an effective predator of other insects and invertebrates, also causing a negative impact on the habitat of native species. Orange in color, with six legs and an antenna that stand out for their length, they catch their prey, lurking, with a behavior similar to that of the much better known Praying Mantis, although they are more sensitive to movement.

Those who have suffered their puncture assure that it produces a intense and sharp pain that lasts for several minutes before disappearing, “Although in some people it can last for hours”. After the bite there is a small wound. The truth is that this “bug” has bitten at any time of the day, both indoors and outdoors, and researchers studying its progress suggest that “they could be attracted to humans when they move.” The first case of sting that is recorded in Spain was documented in the province of Alicante. It happened in Elche on October 16, 2018, where one of these insects bit a child. Last august in Torrevieja, A woman received two bites when she came out of a pool and went to dry herself with a towel, and also in the same month another bite was documented from a 78-year-old man who was in the shower at his home, and the presence of one of these small specimens in the bathroom window relating it to the sting he received on his calf.

And last March, in Santa Pola, a 8 month old baby presented a picture of four bites. In addition, in the Valencian Community there are references to bites in areas of citrus crops between 2017 and 2018.

The authors consider that the Zelus renardii, a reduced heteropteran with partially hardened wings, with a biting-sucking mouth that feeds on juices or blood “could become a species that causes notable discomfort to people in urban areas in Spain” .

It hibernates as an adult, so “it is not uncommon to find it inside buildings in winter”, so it can have “much more contact with people and end up causing more bites than other” insects of the same indigenous family.

Of course, in the documentation of these cases carried out by Pujol, Pradera and Miralles-Núñez, it is highlighted that “it has not been recorded that it can act as a vector of pathogens that cause some type of disease in humans.”