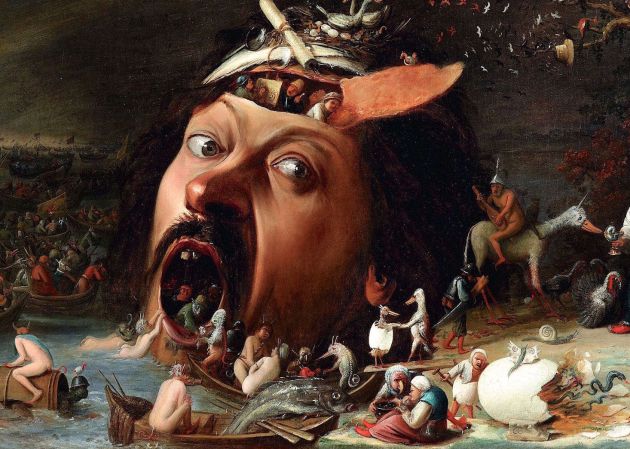 In 1954, artist Graham Sutherland was commissioned to paint a portrait of British Prime Minister Winston Churchill. The politician’s face upon receiving the painting, on the occasion of his 80th birthday, shows his disappointment with the result. The following GIF corresponds to that moment:

The initial idea is for the portrait to hang in Parliament itself after the prime minister’s death, which occurred in 1965, but the work never reached that destination. This story appeared in a chapter of The Crown, the popular Netflix series that has released its fourth season. That chapter recounted how the prime minister’s wife, Lady Spencer-Churchill, burned the painting in her backyard months after it was handed over to her husband. Although Lady Spencer-Churchill’s biographer explained years ago that it was not she who set it on fire, the fate of the work, indeed, was the flames. This action has deprived us of a work of Graham Sutherland, a prominent British painter known for his landscapes and surrealist works.

The history of this portrait reminds us that the artistic works that we conserve are paltry compared to those that were left on the way, either because of the fire or for other reasons. What if we set out to gather in the same imaginary space some of the most relevant works that have disappeared today? In this article we have proposed to create our own impossible museum, adapting to our tastes an idea that the American art historian Noah Charney already had in his book The Museum of Lost Art. So sit back and get ready to see some of those wonders that you can never enjoy live.

Our imaginary museum begins with a room dedicated to the classical world. In it would be found the Athena Partenos, the sculpture of Phidias dated in 438 BC and which guarded the Parthenon, on the Acropolis. Of great proportions and very rich materials, gold and ivory to be more exact, this work became a true symbol of the city of Athens and one of the most revered figures of antiquity. His disappearance under strange circumstances remains unanswered, but several smaller-scale replicas are preserved that allow us to get an idea of ​​the appearance of this work, as it is dated in the 2nd century AD and preserved in the Prado Museum, as well as a detailed description of the Greek geographer Pausanias.

Continuing with the tour, we enter the room dedicated to the Renaissance. Some paintings by Sandro Botticelli would hang on the walls of this room. The Florentine artist decided to destroy several of his mythological themes in his final flight from humanism to spirituality, following the precepts of the friar Girolamo Savonarola, who in 1497 organized a burning of works of art, luxury and jewelery known as “bonfire of the vanities“According to historians, it was Sandro Botticelli himself who threw his works into the flames. We should almost feel grateful to be able to contemplate his famous Birth of Venus, which should have been saved from the disappearance of a miracle.

The next room in our museum could be dedicated to the Baroque. On Christmas Eve 1734, a fire started in the medieval fortress that the Habsburgs had converted in residential palace. It would end with its disappearance, and also with that of more than 500 works that it housed inside. Las Meninas, emblematic work that today rests in our beloved Prado Museum, was one of the lucky few who managed to save themselves from this catastrophe. Among the works that will never see the light again were several by Velázquez, but perhaps the most remembered of them all is The kick of the Moorish, the result of the victory of the Sevillian in a competition to decorate the New Hall of the castle held in 1627. Today we only know the work by its descriptions, although some of the sketches of its competitors can still be seen, such as this by Vicente Carducho.

We then go into the Impressionism room, to learn about a case in which the aforementioned reasons intersect, with both misfortune and frustration being responsible for the disappearance of part of an artist’s production. We refer to the example of Claude Monet and some of the works that make up one of his best-known series, Water lilies: the artist destroyed part by not being satisfied with his result and later, in 1958, two of the works of this same series perished in the fire at the Museum of Modern Art (MoMA) in New York.

With the arrival of the twentieth century, we find ourselves face to face with a significant number of missing works, whose story deserves to be told. It is not a mystery that war conflicts carry with them part of our inheritance, since the attacks and violence that they bring have made us lose unique works. The most striking and devastating story places us in Nazi Germany. Hitler, rejected up to two times by the Academy of Fine Arts, assumed his role as dictator, becoming a kind of artistic critic, condemning those works that did not favor his regime or that could not directly be considered “German art”. With all of them, in 1937 he organized Degenerate art (Degenerate Art), an exhibition that has the opposite objective to that of any current exhibition: instead of being admired, the works it exhibits should be ridiculed and rejected.

Among the artists on display were Franz Marc, Henri Matisse and Marc Chagall. The sample, which denotes a particular rejection of the Nazi government towards modern art, consisted of pieces by about a hundred artists that were sold at ridiculous prices or directly destroyed. Stand out among them The trenchby the German expressionist Otto Dix, thought to be burned for a long time until a purchase receipt was discovered stating that it survived until at least 1940. Today, the work remains unaccounted for.

Continuing with the previous century we find a mythical work that disappeared without a trace. We refer to The reaper, one of the works of which Miró was most proud. Also known as The Catalan peasant of rebellion, this wall painting was created for the same purpose as The Guernica by Pablo Picasso: be part of the exhibition of the Pavilion of the Spanish Republic at the Universal Exhibition in Paris in 1937. A selection of works that had the clear mission of making the horrors of war visible and serving as propaganda for the Republican side. At the end of the exhibition, as with other works, nothing else was known about the painting.

Even without leaving the twentieth century, we are now approaching another of the great reasons for the disappearance of works of art throughout history: theft. In our imaginary museum we collect what is perhaps the greatest theft in history, the one that suffered the Museo Isabella Stewart Gardner, in Massachusetts. That March 18, 1990, the thieves prevented us from seeing 13 works by well-known artists, among which was The storm on the Galillean Sea, by Rembrandt, his only marine painting, and The concert, by Vermeer. Today, the frames continue to occupy their place without the canvases they housed, as can be seen in the virtual tour of the museum. And what is this decision due to? As pointed out this article from The confidentialThe real cause is found in the fact that the owner’s will prevents changes from being made to the collection. But it almost seems like a desperate call to return to the works after 30 years without news.

Although we have barely lived two decades, in the 21st century we have also lost some works. For example, conflicts that occurred in our century have taken away priceless pieces, such as the colossal buddhas of Bamiyan, in Afghanistan, destroyed by the Taliban in 2001. But among the pieces exhibited in the room, one whose disappearance is at least confusing would draw attention. Equal-Parallel: Guernica-Benghazi It is a sculpture of great proportions, the work of Richard Serra and is part of the Museo Reina Sofía collection. What many visitors do not know is that the work they see is a reproduction of the original made by the artist himself, since the 38 tons that the work weighs did not prevent it from volatilizing from the museum’s warehouses. Today, the causes that led to his disappearance remain a mystery.

* You can also follow us on Instagram and Flipboard. Don’t miss out on the best of Verne!