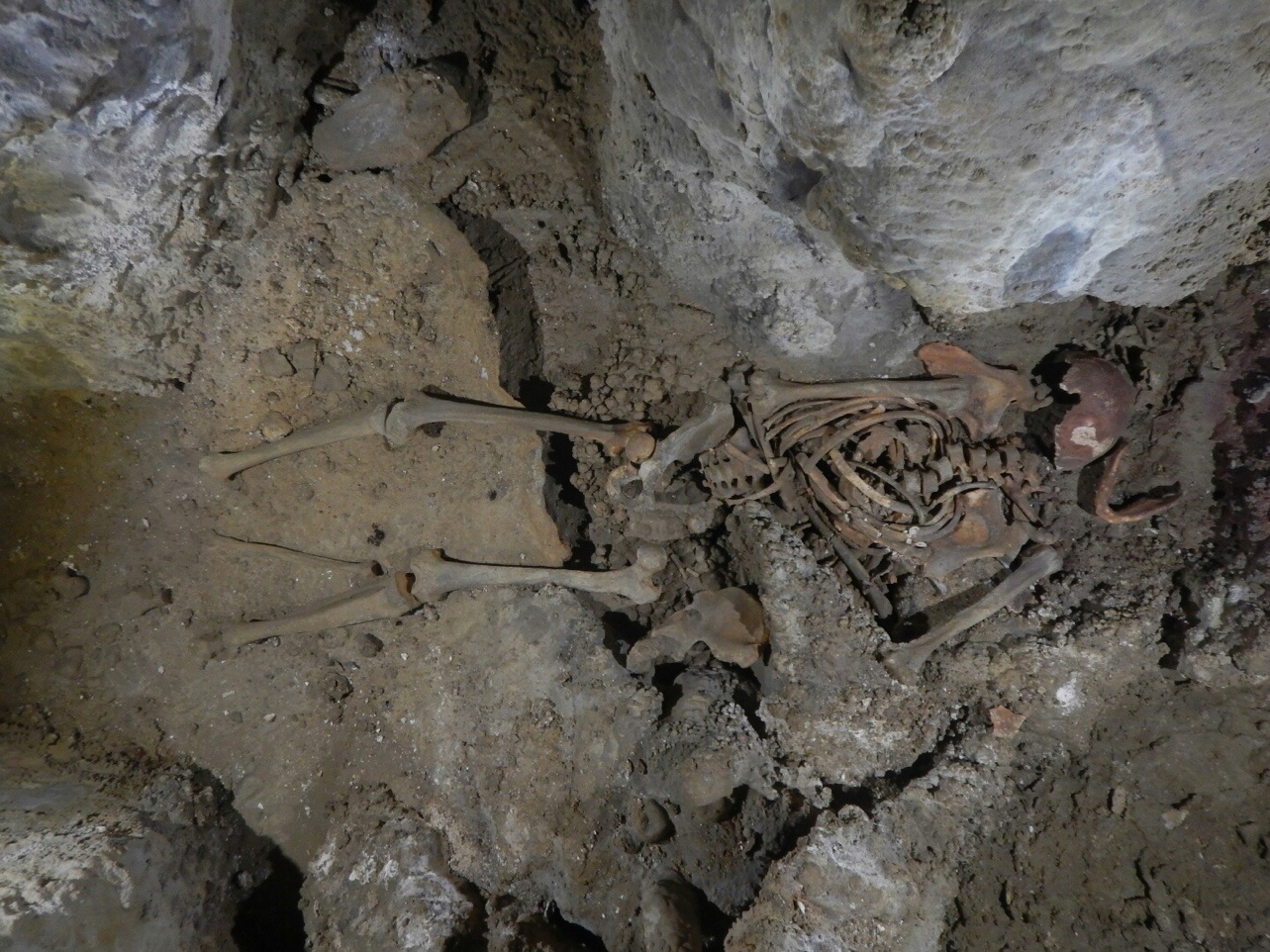 A male between 17 and 21 years old, buried more than 11,700 years ago with a hole in his head in a labyrinthine cave in Loizu, in the Erro Valley, has been listed as the oldest human body discovered in Navarra. It is a worthy representative of the last generations of hunters and gatherers who lived in the Pyrenees in the passage from the Pleistocene to the Holocene. His skeleton has been preserved complete, in a supine position, with the skull fractured and the jaw in an inverted position. It is in a magnificent state of conservation and experts agree that its archaeological and anthropological value is incalculable, as it could provide relevant information on the behavior of societies at that time and, above all, on the origin of violence between humans.

The remains of who is already known as loizu’s man They were found on November 20, 2017 by the Sakon caving group when it was exploring the Errotalde I cave, in the upper basin of the Erro river. “We have little doubt that the skeleton corresponds to an intentional funerary deposit,” says Pablo Arias Cabal, professor of Prehistory at the University of Cantabria, in a preliminary report prepared after analyzing the bones and the environment where it was located. It is a “truly exceptional” find, he assures in his study, both due to the good state of preservation of the remains and the little alteration of the archaeological context.

The significance of the find “goes beyond” being “the oldest individual in Navarra.” Anthropologists believe that it is a testimony “of incalculable value” to analyze how the humans of southwestern Europe lived in one of the great moments of change for humanity: the transition from the last ice age to modern geological times, “a period of accelerated climate change and deep ecological transformations ”, argues Professor Arias. A multidisciplinary team, made up of 26 people, including cavers, archaeologists, anthropologists, geologists, restorers, specialists in graphic registration, participates in the research directed by the Government of Navarra together with the International Institute for Prehistoric Studies of the University of Cantabria.

The man from Loizu was located a little over three years ago inside the Errotalde I cave, with 1,325 meters of explored path and formed by narrow galleries with sections that can only be advanced by crawling. About 200 meters from the entrance, in a small widening, there was a skeleton lying on its back on a stalagmitic floor. “What is striking,” says Arias, “is that the body is in anatomical connection, with the arms crossed over the belly. Some bones, such as the right axis, humerus and ulna and some bones of the feet, were found attached to the ground by concretion ”.

Also Read  The covid-19 does not give truce: Alicante again exceeds 1,000 infections in one day with 43 deaths

The group of scholars were struck by the presence of a hole in the skull, “probably due to the impact of a projectile”, according to the study carried out by anthropologists Edgard Camarós and Maitane Tirapu, and some reddish-colored sediments in the area of head. The position of the corpse indicates that it was carefully deposited in that place, most likely wrapped in a shroud or funeral package, judging by the position of the legs and the scant dispersion of the bones.

The radiocarbon dating of the remains temporarily places it around the year 9700 BC, in the passage from the Pleistocene to the Holocene, “a time in which anthropological evidence is not abundant in the Iberian Peninsula and even in the whole of the European continent” , assures Arias in his report. There are few similar cases of the Upper Paleolithic and the Epipaleolithic in Spain. The closest in time, explains the professor of Prehistory, is the skeleton of the Azilian burial of the Cueva de los Azules, in Asturias, dated around 8850 BC, although it was found much more degraded, with the loss of many pieces bone and poorer preservation. The Loizu man, on the other hand, stores bone collagen “perfectly”.

Professor Manuel González Morales, from the University of Cantabria, who participated in the discovery of “La Dama Roja” from the El Mirón cave, near Altamira, believes that the discovery in Navarra is “very interesting”, although it should be expected until publication of the detailed study to know its true value and evaluate the archaeological context of this human deposit. The professor of Prehistory highlights the “extraordinarily good” performance of the team of speleologists who found the remains in the Loizu cave and hopes that the ongoing investigations will allow us to elucidate what the genetic ancestry of the dead was and whether it is related to other Mesolithic corpses discovered on the peninsula.

The work of extracting the remains ended this Thursday and will now begin its study in the laboratories. An osteological analysis of the individual will be carried out to determine how old he was when he died, the cause of death, his height and complexion…; a study of dental micro-wear, which would allow to know the type of food diet of the time, as well as biomolecular tests (carbon dating14), a paleogenomic analysis to try to reconstruct its genome and archaeobotanical and geochemical examinations of the scene of the funerary deposit.

The University of Cantabria will be in charge of these research tasks. Then he will return to Navarra to expose it to the public under the custody of the Provincial Government.