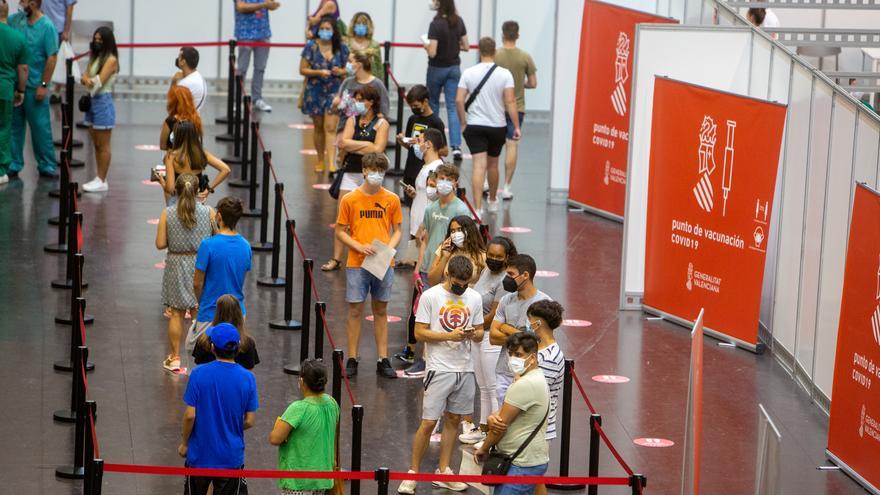 None of the health departments of the demarcation is already at extreme risk, since the only one that remained in this situation at the end of last week, Orihuela, has dropped to 241.07. However, a total of 24 municipalities in the province continue with rates above 250, of which a dozen have more than 5,000 inhabitants. Of all of them, the most prominent is Benidorm, the only one of the large towns in the province with a complicated outlook. Although it evolves favorably, it still has 200 affected and an index of 283.89. On the other hand, Alicante and Torrevieja leave that area of ​​maximum danger, with 195.27 and 238.58, respectively.

Of the other 11 municipalities with more than 5,000 inhabitants at extreme risk, seven are in the department of Orihuela, whose incidence continues to be much higher than the rest. In Callosa de Segura the situation improves a lot, but the rate is still at 350.29, while Cox drops to 284.32. Almoradí and Redován also improved, although in a more discreet way, to 377.22 and 328.03, respectively, and Benejúzar even more slightly, to 367.99. However, Bigastro and Dolores are more affected, thus returning to the danger zone, with 260.53 and 252.29, also respectively. For its part, the municipality of Orihuela is at 184.7.

The areas of the General Hospital of Alicante and Sant Joan d’Alacant also improved significantly, up to respective incidents of 184.31 and 179.49. Several municipalities are already at medium risk, such as El Campello, which thus joins Mutxamel; Not San Vicente del Raspeig, but it still registers an indicator of 205.16, although it is evolving downward. At the other extreme, on the other hand, Monforte del Cid continues with 359.45 although it improves considerably. Likewise, in the Elda area the average rate is 181.55, but Monóvar continues with an exorbitant rate of 401.24, thus being the Alicante town of more than 5,000 inhabitants with a worse data. It should be remembered that in this municipality of Medio Vinalopó the Exaltation of Fiestas had to be suspended last Saturday due to the positive of its Greater Queen. The city of Elda is at 198.81, and in this area, as a positive data, that of Pinoso stands out: 62.31.

The Marina Alta and Baix Vinalopó lower the average

In the department of Alcoy, where the overall incidence is 179.94 and that of Alcoy itself is 158.37, the worst situation continues to correspond to Cocentaina, with a rate of 303.82, although there is a slight improvement. On the other hand, this decline has been greater in Castalla, which has lowered the index to 229.42, so that the town comes out of extreme risk. In this health area is the only municipality with more than 5,000 inhabitants where the risk of contagion is minimal: it is Banyeres, with only three active cases, after a quite remarkable improvement in recent days, and a rate of 42.31. Onil also stands out, with four affected and 52.63 of indicator.

In the Marina Baixa the average rate is 188.15 and, apart from Benidorm, no municipality presents a complicated situation; Finestrat adds two more active cases, but the total is only four, and the incidence is by very little of medium risk: 56.31. Altea and l’Alfàs del Pi fall to 97.53 and 74.84, while Vila Joiosa is more stagnant, although also at medium risk: 119.32.

Meanwhile, the Marina Alta has undergone another very important improvement, and its index is once again much lower than the provincial average, to the point that, in fact, it is ostensibly falling: 127.18, that is, at risk half. Dénia presents a similar situation, with 121.42, like Xàbia, with 124.93. Also Pedreguer and Pego, although both localities add one more active case. Of course, there is still a municipality at extreme risk: Teulada. It improves a lot, but it is still at 283.74.

In Baix Vinalopó, the dichotomy between the departments of the General Hospital of Elche and Elche-Crevillent continues, the former with a rate of 184.27 and the latter with 85.88. The latter is by far the lowest in the province. Of course, this last area has registered five deaths these days, according to Health. The city of Elche has an incidence of 143.55, so it is also at medium risk. Finally, the average for the department of Torrevieja is 191.22.