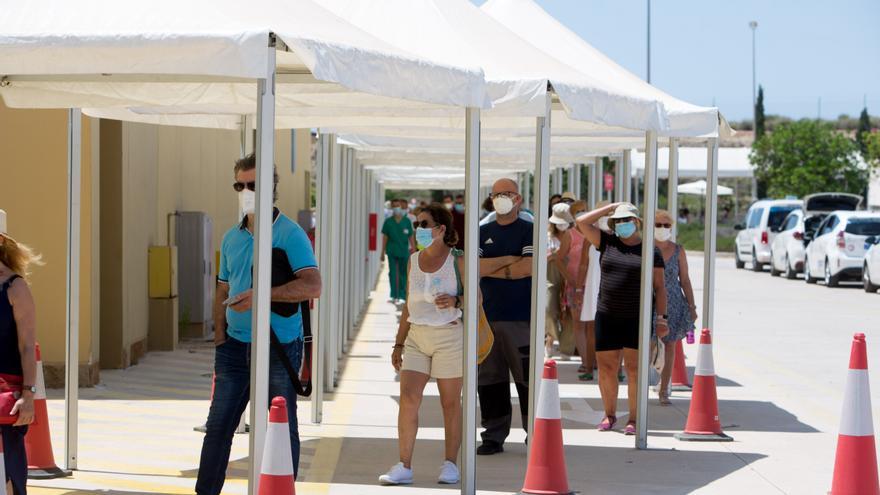 Active cases are, according to these data, 6,995, 27.65% more than three days ago. The department where there are more patients in absolute terms is the General Hospital of Alicante, with 1,298, but practically the same, 1,274, has Dénia. This means that the Marina Alta has the highest incidence in the province, to the point of practically tripling the barrier from which it is considered extreme risk: 746.67. Calp continues to be the most affected municipality, with a rate that now stands at 1,569.06; El Verger also reached 1,083.03, and Gata de Gorgos 1,073.2. In addition, there are more than 500 in six other municipalities, including Dénia, Xàbia, Teulada and Benissa, and 250 in four more.

The Marina Baixa is not much better. The average incidence of the department also doubles the extreme risk index: 504.29. The entire coastline of this region is above 400 cases per 100,000 inhabitants, with Benidorm in the worst situation: 604.68. La Vila Joiosa also exceeds 500. Likewise, the departments of Sant Joan d’Alacant and the General Hospital of Alicante are with 479.99 and 470.94, respectively. The only town in the Alicante area with a rate lower than 400 is Mutxamel, which in any case is at extreme risk: 354.84.

Also the department of the General Hospital of Elche has an incidence of 407.42. In this case, Santa Pola especially raises the index, with a figure in line with practically the entire coastline of the province: 489.45. The Alcoy area, for its part, also amounts to 351.82; at its head the incidence is 461.64, although Muro and Banyeres continue to be even more affected in proportion to their population, with 665.59 and 662.91 respectively.

On the other hand, the departments of Elda and Torrevieja become at high risk and thus join that of Orihuela. In all three, the incidence has risen very significantly, but especially in Torrevieja, which three days ago was at 101.33 and now is at 185.23. The head of the area has jumped into the extreme risk zone, by raising its rate to 250.39. In the Orihuela area, Albatera and Callosa de Segura are also in this situation, while in Elda the situation is especially complicated in Sax and Villena; Biar continues with a very high index (410.4), but continues to decline. Elche-Crevillent is the only department that is currently at medium risk, although its rate has also increased notably in recent days, to 127.87.

There are barely thirty municipalities without active cases at the moment, all of them with few inhabitants; the most populated is Hondón de las Nieves. In the Elda area only Cañada and El Camp de Mirra are fought, and in Sant Joan d’Alacant the only town without covid right now is La Torre de les Maçanes. In the departments of Alcoy, Dénia and La Vila Joiosa, the virus is progressively making an appearance in small towns, as it happened during the second and third waves; practically only those located more in the mountains and with less mobility towards the coast or the large urban centers of the interior are fought. There are still six municipalities without a single case among their neighbors throughout the pandemic: Benillup, Famorca, Benifato, Confrides, El Castell de Guadalest and Bolulla.