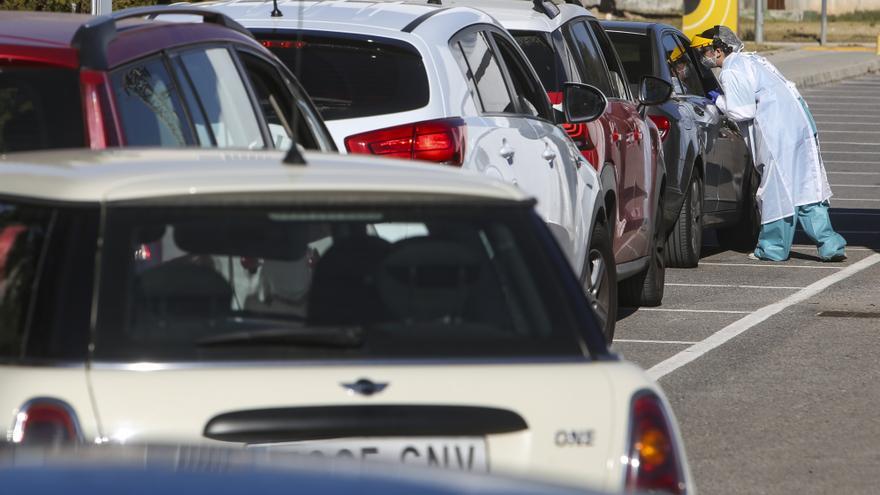 The incidence of the coronavirus has risen sharply in the regions of l’Alacantí and La Vega Baja since the end of last week, while in the rest of the province it has started to decline significantly. The data released yesterday by the Conselleria de Sanidad Universal y Salud Pública show how the health departments to which these regions belong, those of the General Hospital of Alicante, Sant Joan d’Alacant, Orihuela and Torrevieja, are those that register the greatest appearance of new cases since the end of last week, as well as more deceasedespecially the first two. This causes its accumulated incidence in the last 14 days to increase very significantly, while in the rest it decreases.

Thus, in the area of ​​the General Hospital of Alicante 2,553 infections have been registered in four days, and 1,962 in the territory attached to the Hospital de Sant Joan d’Alacant, that is, 4,515 in total. To this must be added the death of 53 people in these health areas 21 and 32 respectively. In the other areas, deaths have been less numerous, although unfortunately there have also been.

The volume of new patients in the departments that comprise the region of the Alicante and the municipalities of Tibi and Monforte del Cid have been much higher than the discharges, so that if last Friday there were 3,777 active cases in the department of the General Hospital of Alicante and 2,787 in that of Sant Joan, as of yesterday these figures they had risen to 4,119 and 2,952 respectively. The first of these two areas has become the one with the highest absolute number of active cases in the province, surpassing those of Cook, the General Hospital of Elche and Alcoy, that until now were ahead. The incidence in these areas is currently 1,481.15 in the General Hospital of the capital and 1,325.15 in the Sant Joan, compared to 1,358.17 and 1,251.8, respectively, a few days ago.

For its part, in the Orihuela health department there have been 1,171 infections in four days, and 1,064 in Torrevieja, which leaves the respective figures of active cases in these areas at 2,498 and 1,408. The rise is especially high in Torrevieja, which on Friday of last week did not reach a thousand sick people. It continues to have the lowest incidence in the entire province, 756.89 active cases per 100,000 inhabitants, although the increase is evident if this data is compared with the 530.4 cases per 100,000 inhabitants on Friday of last week. As for the Orihuela area, the rate rises from 1,331.57 to 1,485.6. In four days there have been seven deaths in the department of Orihuela and 13 in Torrevieja.

Alcoy, in the lead but down

However, the highest rate continues to correspond to the department of Alcoy, with 2,381.6 cases per 100,000 inhabitants, although the evolution has been very positive since the previous data update, when it was at 2,785.9. This has been thanks to the fact that the discharges have been much higher than the new cases, which have been 878; in addition, nine people have died. After this health area continues to be the General Hospital of Elche, with 2,309.91 active cases per 100,000 inhabitants and that it can be said rather that its situation is stagnant, although with a downward trend, since its previous incidence was 2,335.31. Also, in these four days eight people have died in the department of the General Hospital of Elche and nine in that of Elda.

The stagnation in the Elche General Hospital area contrasts with the improvement recorded in Elche-Crevillent, whose incidence drops from 1,376.31 to 1,253.63 cases per 100,000 inhabitants. However, despite the fact that there are almost 200 active cases in this area less than four days ago, there have been 764 more infections and six people have died.

An analogous situation presents the Marina Baixa, where the rate of sick people per 100,000 inhabitants has also fallen from 1,404.63 to 1,269.72 and active cases from 2,603 ​​to 2,353, but with 632 new infections and a dozen more deaths. The same occurs in the Marina Alta, where there are 307 fewer sick people than at the end of last week but in four days there have been 764 infections and nine people have died. However, the volume of discharges makes it possible for the incidence to drop from 1,085.94 to 907.18. This is a very high rate, but under current circumstances it is hardly less than a milestone.