The world’s largest shipping company, Danish Maersk, is making more money than ever.

Thanks to the escalation in the rental price of its containers, the firm recorded in the third quarter of the year the most profitable period in its 117-year history.

Earnings, before deducting taxes and interest, reached US $ 5.9 billion, while revenues reached US $ 16.6 billion.

The large shipping companies have turned out to be the big winners of the crisis of supply chains move goods around the world.

As there is excess demand from consumers and lack of supply to move the products, shipping prices have skyrocketed.

On some of the busiest shipping routes between Asia and the United States, Europe or Latin America, rates have reached go up more than 500%.

“The ports are not working as well as they should, so we cannot unload containers as fast as we would like,” Soren Skou, Maersk’s chief executive, said in early November.

As the ports and the entire transport logistics chain experience traffic jams, the goods take time to reach their destination.

Companies are forced to pay more to transport their products and consumers also end up paying more for them.

Simon Heaney, senior director of the container research unit at the consultancy Drewry, explains to BBC Mundo that the shipping sector is recording record profits.

Also Read  Alicante will spend 1.7 million on the purchase of 2,000 brown containers for organic waste 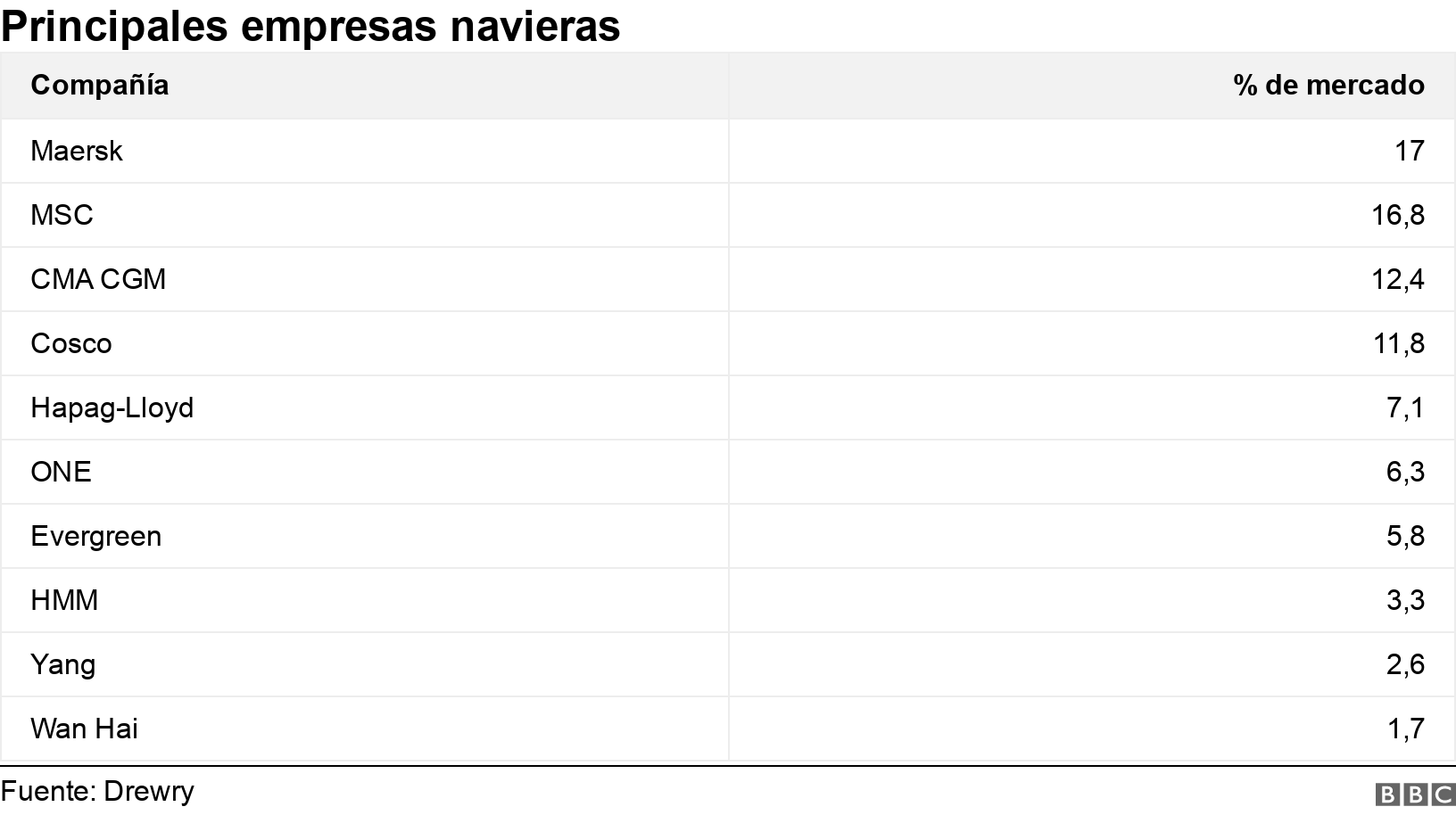 Well, for this year, they project that the shipping industry would make a profit of at least $ 150 billion.

“They are going to double in one year what they got in almost two decades”Heaney notes.

But he warns that this is an exceptional situation.

In general, shipping is seen as “a low-margin industry that attracts few investors,” he explains.

The five largest shipping companies in the world account for two thirds of the market.

AND the 10 largest companies control 85% of global shipping, according to Drewry data.

“I would say that the market is moderately concentrated and that it is a fairly competitive sector,” says the expert.

“It is an oligopoly”

A completely different vision has Alejandro Molins, consultant and academic at the School of Industrial Organization (EOI), in Spain.

“We are facing a market that is in the hands of very few operators that control the traffic of goods in the world,” he says in dialogue with BBC Mundo.

“Today they have spectacular benefits, although there have been years in which they have lost a lot of money as well. What is a fact is that the world sees an increasingly reduced supply of shipping companies,” he adds.

Molins says that the concentration of a market does not favor competition or benefit consumers.

“The smallest companies they do not have the capacity to negotiate if there are few players in the market. “

On the other hand, he argues, shipping companies don’t just own the ships and containers.

They also own the rest of the logistics chain by controlling ports, loading, unloading, land transport, warehouses, etc.

“They are integrating the business vertically and horizontally,” he says.

From his point of view, the concentration in the shipping companies’ market is similar to what happens in other markets, such as the tech giants.

Willy Shih, a professor at Harvard Business School, points out that shipping companies’ record earnings are due to a supply and demand issue in an industry with ups and downs.

“The shipping industry has had years of austerity. For decades it has not been such a profitable business for having excess capacity, “he says in dialogue with BBC Mundo.

“It is a cyclical business,” adds the researcher.

Projections suggest that the crisis in the supply chains will continue next year, not only because there are bottlenecks in the ports, but also because labor shortage in other key parts of the process like. For example, truck drivers carrying goods from port terminals to distribution centers.

As the crisis shows no signs of abating, the firms that are running out of inventory have had to resort to air transport of products.

American companies like Nike, Crocs o Levi Strauss they have paid higher costs to transport some of their products on airplanes.

This explains why the demand for air cargo transport has started to rise, a more expensive alternative, but one that in a challenging context like the current one, has gained space.

Even the giant Maersk has begun to expand its operations from the sea to the skies, buying Senator International, a cargo operator based in Hamburg, Germany, which will give it more access to aircraft, rail capacity, warehousing, distribution lines and product packaging.