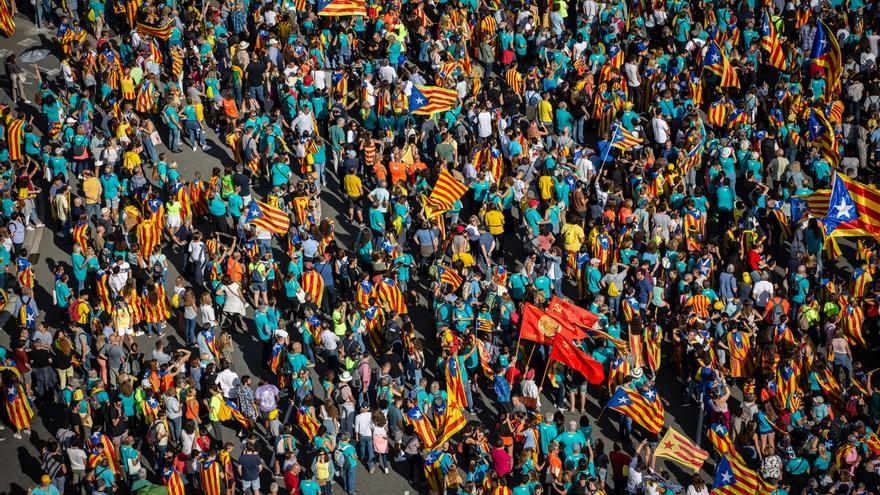 The independence movement mobilizes this Saturday on the occasion of the Day of September 11 and it does so with an eye on the dialogue table between the Generalitat and the Government scheduled for next week, which generates tensions and discrepancies between the parties and entities favorable to the independence of Catalonia.

After last year was the most lowered Diada in recent years due to the restrictions due to the coronavirus pandemic, This time it will be held more normally but still conditioned by the limitations of the Covid-19.

The focus is on the Barcelona demonstration called by the ANC, that this year has as its motto ‘Lluitem i guanyem la independeència’ (‘Let’s fight and win independence’) and is now a march to use unlike in recent years, more characterized by massive and static mobilizations that sought to fill large spaces in the who were doing some kind of ‘performance’.

The demonstration, which can be held because the Government has lifted restrictions on the gathering of people as of this Friday, begins in plaza Urquinaona, where there were great disturbances after the sentence of 1-O.

It will go down the Via Laietana, passing in front of the National Police Station, and will end in front of the France Station, where an act will be held with the interventions of the President of the ANC, Elisenda Paluzie; of Òmnium, Jordi Cuixart, and of the AMI, Jordi Gaseni.

The ANC has not wanted to set a figure that makes the mobilization considered a success and believes that it cannot be compared with demonstrations of other years because it will still be done in a pandemic context, but Paluzie explained on Thursday that they foresee congregate a group of “six digits” and he trusted that it will be one of the largest mobilizations in Europe in times of coronavirus.

Sánchez wishes a day of “reunion”

The President of the Government, Pedro Sánchez, has opted to celebrate this Saturday a Day of “reunion” and working for “a positive Catalonia”. “For a Diada where reunion, affection and harmony guide us,” Sánchez wrote on Twitter, wishing a happy Diada to all Catalans. “Let’s move towards what unites us, let’s work for a positive Catalonia, who is walking decisively towards a future of progress “, he underlined in his message, which he has published in both Spanish and Catalan.

For a #Diada in which reunion, affection, and concord guide us.

We are moving towards what unites us, we are working for a positive Catalonia, which is moving decisively towards a future of progress.

Division at the table

For the convening entity, this demonstration seeks to show that independence will be achieved by fighting from the mobilization of citizenship together with the action of the institutions, and in recent days the Government and the pro-independence parties have defended that it should serve to return to demonstrate the “strength” of the sovereign movement.

However, it is foreseeable that the differences facing the dialogue table, that the independence movement faces divided: ERC is the only actor that clearly bets on the table, Junts constantly criticizes it although it participates in it, the CUP does not believe in the dialogue strategy despite the fact that it agreed with the Republicans to give it two years of margin, and the ANC has taken a stand against it.

In fact, on Monday the deputy general secretary and ERC spokesperson, Marta Vilalta, already asked not to use this demonstration to “attack and point out fellow independence travelers” nor to the dialogue strategy, especially one week after the Generalitat and the Government meet, still with the unknown whether the Prime Minister, Pedro Sánchez, will attend.

First Diada after the pardons

This Diada will be the first after the pardons to the inmates of 1-O, so that it will be the first September 11 in which the independence leaders who were imprisoned can participate in the acts with total freedom.

In fact, some of them will star in events, such as the one that organizes Omnium with Cuixart at the forefront, along with “international personalities recognized throughout the world for their fight for human, civil and political rights”, and the one that ERC will do with its leader, Oriol Junqueras.

As usual, this Saturday the traditional acts of the Diada will be held, such as the obrakes of institutions, parties, entities and unions to the monument of Rafael Casanova at first hour of the morning.

At 22.00 the institutional act organized by the Generalitat and the Parliament before the four columns of Puig i Cadafalch in Montjuïc: this year it will commemorate the speech that the cellist Pau Casals made before the UN General Assembly 50 years ago and will have the artistic direction of the actress and director Marta Bayarri and the musical direction of Jofre Bardagí.

Another of the usual events in the dyads is the demonstration organized by the Independence Left, formed by organizations such as CUP, Arran and SEPC, among others, and that this year it will once again mobilize from Plaza Urquinaona to Plaza Comercial under the motto ‘La Lluita es l’únic camí’ (‘The fight is the only way’).

Apart from the independence acts, the parties against independence They will also do some acts on the occasion of the Diada, which for years they have criticized that it has become a holiday for Catalan independence and not for the whole of Catalan society, according to them.

The PSC will limit its activity to institutional acts, such as the offering to the Rafael Casanova monument, which will be headed by Minister Raquel Sánchez, former President José Montilla and the leader of the PSC in Parliament and head of the opposition, Salvador Illa; And so will the comuns, although the president of United We Can in Congress, Jaume Asens, will also participate in the Òmnium act.

Both Vox, Cs and PP will hold their own events: those of Ignacio Garriga will participate in a training session for the Denaes Foundation; the orange party will celebrate the act ‘9/11: dismantling the nationalist myth ‘ in Barcelona with its leaders in the Parliament, Carlos Carrizosa, and in the Barcelona City Council, Luz Guilarte, and the historian Jordi Canal; and the PP will read a manifesto in L’Hospitalet de Llobregat (Barcelona).