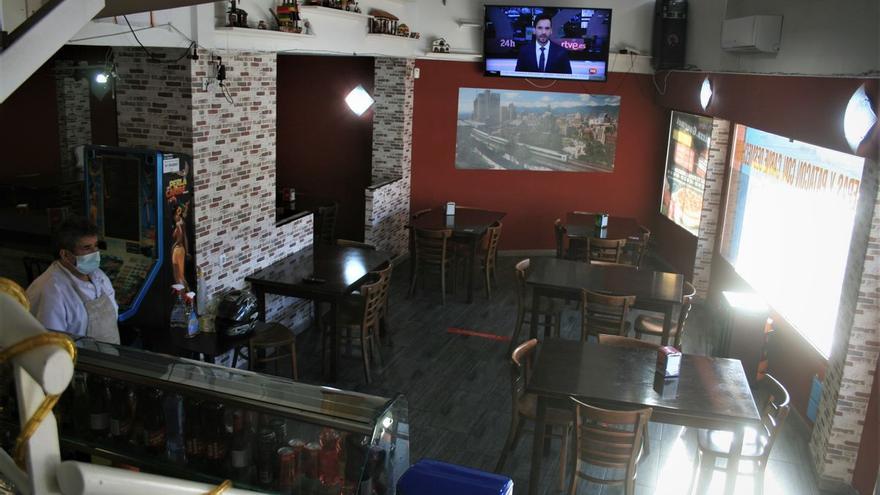 The whole town knows the story of Manu, the name under which Gioacchino Gammino was hiding: an Italian mobster on the run for twenty years and arrested on December 17.

“They stopped him here in front. He was always sitting on that step, where he used to have the greengrocer. And everything was super good always: I was going for a Coca-Cola, hello, Manu, hello … Until a month or so ago, suddenly I go down this sidewalk and see it. And me: Manu, Manu! I thought something had happened to him. There were a lot of police around, shouting ‘nobody come near! National Police! ‘, Taking pictures of him and reading him about his rights. And in the end they took him away. He had been searching and capturing for twenty years living like a normal person. It’s very strong. “

The person who recreates the scene is Merche, one of the pharmaceutical companies on the Avenida de los Voluntarios de Galapagar. There seems to be no one left in this small town in the mountains of Madrid who has not heard the story of Manu, the name under which he hid Gioacchino Gammino, an important leader of the Italian mafia who was arrested on December 17, according to the newspaper The Republic.

Gammino, convicted of mafia-type association, murder and drug trafficking, had escaped from Rome jail in 2002 and had been in hiding for two decades in Spain, where he had already turned 61. During all that time he led an almost normal life.

The arrest took place in one of the most central streets of the municipality, two places from the pharmacy. The police, the young pharmacist explains, sat Gaminno on the ledge of an awning shop on the corner. The Italian was known on that street because until less than a year ago He ran a greengrocer called El Huerto de Manu.

Also Read  Renovated, brand new or pre-owned apartments in Villena, what is your choice?

Today the place is a hairdresser in the hands of another person, who claims to know him but has nothing to comment on.

It was precisely a Google Street View photograph from El Huerto de Manu, which confirmed the suspicions of the Italian Anti-Mafia Investigation Directorate, which had placed him in Galapagar for two years. As it happened, Google’s car drove past the store while he was out, chatting with another man and leaning against the wall.

“It is not that we spend the day looking at Google Maps to find fugitives”, declared the prosecutor of Palermo, Francesco Lo Voi, to The Guardian. “There were several previous investigations that led us to Spain. We were on the right track and Google helped us confirm our inquiries“.

Gaminno – or Manu, as everyone keeps referring to him – is popular in Galapagar. The municipality, surrounded by urbanizations of terraced houses and large chalets, has an old and central part.

Before opening the greengrocer, right next to the church square and town center, Gaminno had un pizza restaurant: La Cocina de Manu. It is a few meters away, in another nearby square that has a Todo a Cien, a butcher shop and a gambling establishment where the Italian spent part of his time.

“When I had the pizzeria I came a lot to buy here. It was known, at least among merchants,” says the clerk from Todo a Cien, still perplexed by the news, which has reached the Spanish media this week and has spread like wildfire between neighbors. “He became a little better known when he attacked the PP councilor, but no more “.

In 2018, Gammino punched Ángel Camacho Lázaro, councilor of the PP then responsible for Spatial Planning, Urban Planning and the Environment, when both were in the lottery administration.

He did, according to the chronicles of the time, to the cry of “You are the councilor who has ruined my business! I am going to ruin your life and I am going to kill you!”. The cameras recorded the scene.

“Apparently he closed the oven of the pizzeria and drove him,” sums up the pharmacist. “I think that that was what started to bring him problems“.

As head of the branch, Camacho, who has declined to make statements to this newspaper, had closed the wood oven of the pizza mafioso for putting the smoke outlet in the patio of lights and disturbing the neighbors.

The councilor, now in opposition, had to carry collar after the assault. Gammino was sentenced to a fine of 1,500 euros and to pay another 325 euros in compensation. But he wrote a letter of apology.

As Camacho has declared to the newspaper ABC, “when I found out about his arrest and who he really was, I did think he might have killed me. My heart skipped a beat. The funny thing is that a year ago we had the trial and he used a false identity [Vincenzo] that even in court did not cause suspicions. “

Pancho is the businessman who He took the place of the pizzeria when it closed. Now it is a local Latin American food called Sabores Latinos.

“I paid him a transfer of 20,000 euros three years ago. He spoke with a brother of mine and offered it to him saying that he was already very tired of the restaurant. I think it is because he already had the greengrocer,” he recalls. “He was a very nice man and he made very good pizzas. The day they arrested him, he had stopped by to say hello“.

Gammino lived in Galapagar with his Dominican wife and their daughter, thirteen years old.

“It is an edging. He’s a guy we’ve known our whole life, that he would see you and say ‘hey, kid’, that he never spoke badly to you, “adds a young man from the town while having a coffee with milk at the gambling establishment.” We are few here and we all know each other. Many times we were out there and he would take out chunks of pizza. I even asked him for a job, in case he needed someone to deliver “.

This Friday, cold but sunny and full of people on the terraces of the square, two of Gammino’s six brothers could be seen in the town. His sister Giovanna, specifically, angrily attended the press in Italian ensuring that Gioacchino is innocent and that he has an Italian sentence who acquits him of all gangster charges to prove it. But at the end of this article, he had not shown the sentence or responded to several calls from this newspaper.