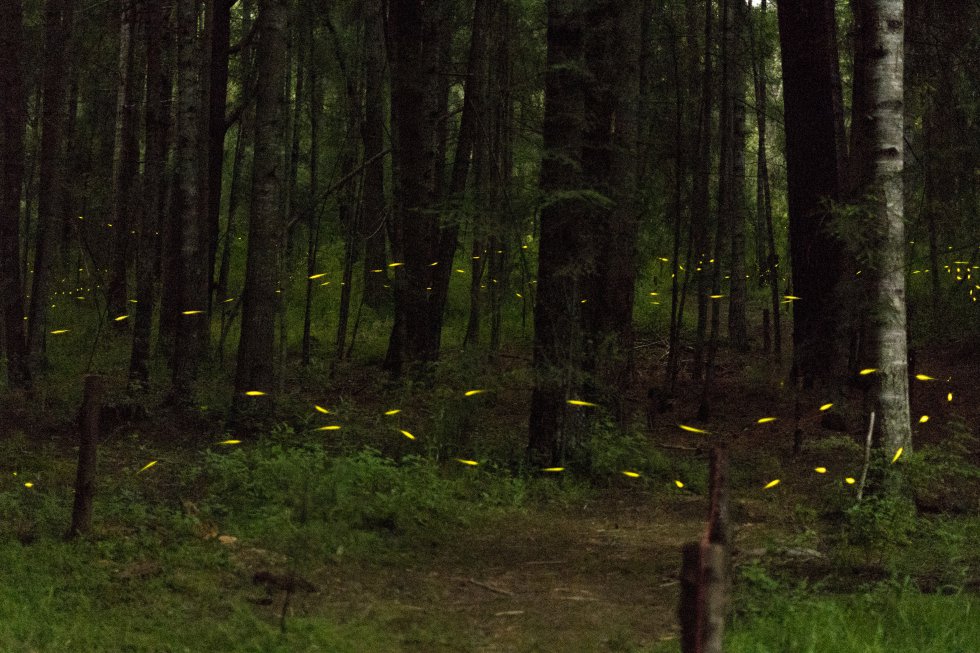 There is a tiny insect with its own light that could be seen on summer nights in the countryside or in small towns. Watching fireflies dance was pure magic. There are hardly any left, the ones around here have died. You can still enjoy its dance of light in privileged places where few or no mass have arrived.

At least in the European species, it is the females that shine (which is not surprising), they do it to attract the males. But unfortunately, with the lights of the humans they are disoriented. The fireflies have gone out because they are delicate and their reproductive cycles have suffered. Say those who know that insects are dying from a deadly combination of habitat loss, pesticide use, climate change, and artificial lighting. But in the case of bioluminescent insects like fireflies, artificial lights are one of their biggest threats.

The amount and intensity of the illuminated surface has increased all over the planet thanks to the reduction in the cost of the facilities (although no one would tell by looking at the electricity bill) and the development of more energy efficient technologies. But the reduction in the cost of our light installations, if it is not accompanied by effective policies to protect the sky, are paid by all living beings. The apocalypse of insects, the nightmare of their extermination, is just one example of a way of life that is threatened by so-called light pollution: a less obvious form of pollution than that of rivers, the atmosphere or plastics. The quality of our sleep and with it our general health is also affected by artificial lighting. And like the fireflies, the stars are also going out. We turn them off with each misplaced bulb, with each lamppost, with each nonsense of night lighting. I don’t think it is necessary to explain that lighting up is unnecessary. Who do we want to dazzle if nobody can see us from above?

The quality of the night sky is important not only so that we can wonder about the cosmos on a starry night, but because we are learning that the living conditions of the entire planet depend on it. Artificial lights have a real impact on ecosystems and the life of many species is affected, including ours, which sometimes seems to be the only one that matters to us. We turn on lights at night to feel more secure. But who was to suppose that the invention of the light bulb would have such dire consequences? The problem appears when we turn them on without having to see, just to make an excessive display of our (dis) evolutionary capacities. And without wanting to be a spoilsport I mean, among other things, the bragging that will be made in the near future to see who has the biggest Christmas lights.

We have a unique opportunity ahead of us, with the reform project of Royal Decree 1980/2008 that regulates outdoor lighting, to do things right. It would allow us to reduce the effect of Light pollution and the impact on biodiversity of lighting in open spaces. With a direct effect on the ability to see the stars better. But for this you have to really regulate and write it well. In our country there are people who have spent years working in studies for the sky protection and we have a lot to learn from them. Perhaps it is not a bad idea (and here I raise the sarcasm card) to involve them in the process of writing the laws. Also mention that there is an initiative underway to create a new Sustainable Development Goal for the Quality of the night sky and access to starlight. SDG (Sustainable Development Goal) (Goal 18) before the United Nations

Lighting in open spaces can be improved in a sensitive way with the environment and with the sky by drafting sensible laws that do not trample on the possibility of other beings to exist as well, without altering habitats or biological cycles (including our own) of plants and animals. We know that life is a complex ecosystem and as we continue to light artificial sources at unnecessary intensities, directions or schedules, we will be the ones who will remain in the dark.

The night is beautiful, let’s just let it be. The stars go out on their own, they don’t need us, what if we get lost is the possibility of measuring the complexity of their fireworks and thereby learning something about where we come from. Reducing light pollution would help us a lot. Let more fireflies light up by turning off more lights.

Eva Villaver She is a researcher at the Center for Astrobiology, dependent on the Higher Council for Scientific Research and the National Institute for Aerospace Technology (CAB / CSIC-INTA).

Cosmic Void It is a section in which our knowledge about the universe is presented in a qualitative and quantitative way. It is intended to explain the importance of understanding the cosmos not only from a scientific point of view but also from a philosophical, social and economic point of view. The name “cosmic vacuum” refers to the fact that the universe is and is, for the most part, empty, with less than 1 atom per cubic meter, despite the fact that in our environment, paradoxically, there are quintillion atoms per meter cubic, which invites us to reflect on our existence and the presence of life in the universe. The section is made up of Pablo G. Pérez González, researcher at the Center for Astrobiology; Patricia Sánchez Blázquez, Professor at the Complutense University of Madrid (UCM); and Eva Villaver, researcher at the Center for Astrobiology

Also Read  Liz Chicaje, the indigenous leader who stood up to illegal mining and logging in Peru