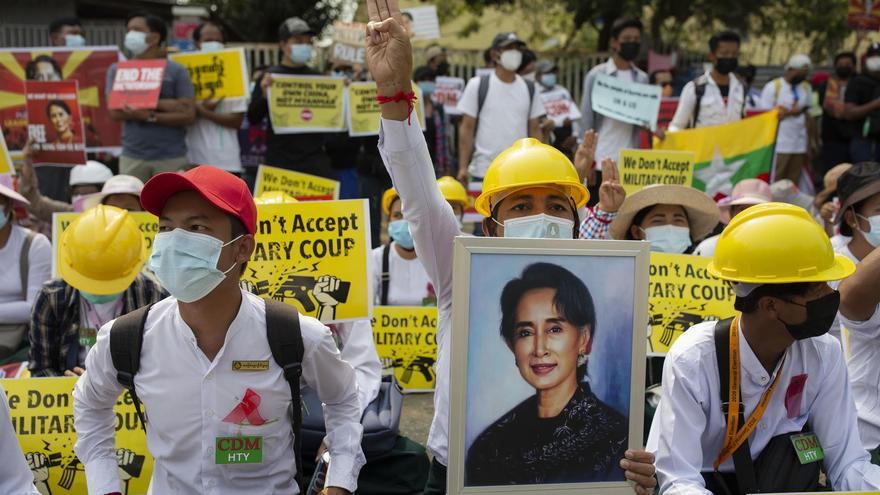 The international community tries to tighten the fence against Burmese military government, facing increasing internal pressure after the coup on February 1, and this Thursday new sanctions were known by the United Kingdom and Canada, which join messages from the United States, Japan, India, and Australia in favor of the “urgent” return of democracy.

The foreign ministers of Japan, India, the United States and Australia, members of the Quad alliance, have called for “the urgent restoration of democratic government“, maintaining that the priority is” to strengthen democratic resilience in the Asia Pacific region, as reported by the US State Department.

The Burmese Army deposed the country’s democratically elected government on February 1 and detained the country’s ‘de facto’ leader, Aung San Suu Kyi, and Burmese President Win Myint, which has generated a wave of protests and broad condemnation from other countries, such as the United States, which has filed sanctions against members of the Army.

Also, the UK Foreign Ministry announced on Thursday new sanctions for “human rights violations“to three members of the Burmese Army, which imply vetoes to work and the freezing of accounts, as well as has announced new measures to prevent the Army from having deals with British companies.

The measures have been taken in conjunction with Canada, which has announced penalties against nine members of the Armed Forces from the Asian country, including the president of the military junta, Mian Aung Hlaing.

Canadian Foreign Minister Marc Garneau has assured that the country “echoes the calls to free those who have been unjustly detained in the military coup.”

“We, together with our international allies, will hold the Burmese Army accountable for its human rights violations and to do justice to the people of Burma,” said British Foreign Minister Dominic Raab.

The United Kingdom had already announced retaliation against 16 members of the Armed Forces of the Asian country.

The European Union foreign ministers will meet next week with possible sanctions on Burma on the table. In addition, it has already reviewed the humanitarian aid it delivers to the country to ensure that it only benefits the population and not the military regime.

The EU High Representative for Foreign Policy, Josep Borrell, has reiterated the EU demand that the Burmese Army release the detainees “arbitrarily”, respect Burmese fundamental rights and restore democracy in the country.

However, the European sources consulted by Europa Press chilled the possibility that on January 22, the date of the meeting, the 27 agree to sanctions against the Asian country, although a document would be agreed in which the EU would reserve the option of take more action.

The NGO Human Rights Watch (HRW) has called on governments to apply “smart sanctions” that are directed against the Army’s main sources of income and its leaders.

Along the same lines, too proposes arms embargoes, as well as anti-money laundering mechanisms.

HRW recalled that arrests are counted in the hundreds in the country and that internet cuts to make it difficult for citizens to organize continue to take place, which does not prevent hundreds of thousands of people from taking to the streets every day.

“The Burmese Army does not expect such a popular outburst on their coup and they had a weak and fragmented international response,” said HRW Director of Advocacy in Asia, John Sifton.