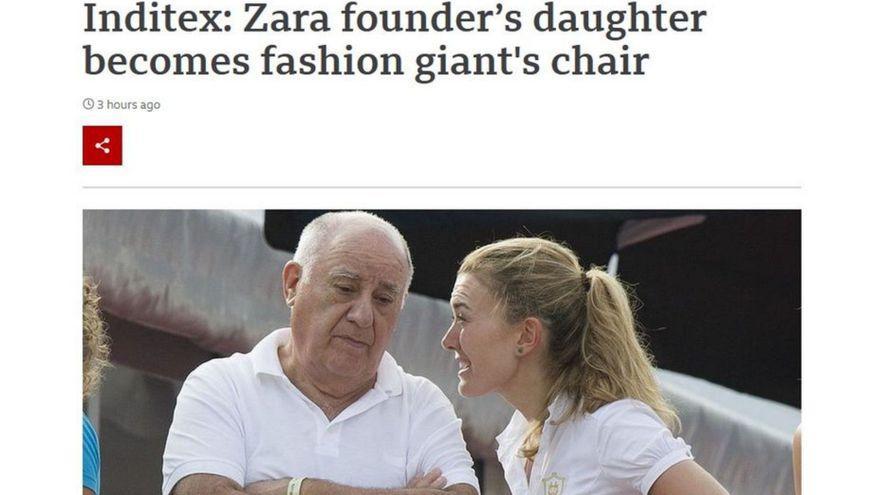 “Premature succession.” “Much to prove.” “Pablo Isla leaves a great gap in the short term “. “Surprising movement.” With these judgments they received the economic analysts and the international financial press the change in the leadership of Inditex announced yesterday by the outgoing president, Pablo Isla. The appointment as new president of Marta Ortega, daughter of the founder of the textile colossus, dislodged some specialized media early in the morning, who made use of experts to advance the overall impression caused by the company’s executive reorganization.

The headlines coincide in highlighting the “Family control” of the multinational with the “Surprising restructuring” and the information reviews the explanations offered by Isla in the appearance in which he announced the end of his stage, the change of helm and other changes in the executive structure. The texts collect the doubts generated by the decision, as well as its effect on the stock market.

Bloomberg, who notes that Marta Ortega “has never held a first-class position” at Inditex, attributes the reorganization to a possible reduction in investor confidence in the group’s management, following the departure of heavyweights such as Isla himself. term ”, analyst Cedric Rossi told the media. The financial services company Alantra describes the change in the same medium as “bad news”, considering that Island is “difficult to replace” and note that the new CEO, Óscar García Maceiras, “has no experience in fashion”.

The agency also refers to this aspect Reuters, who adds that “most stock brokers” emphasize that the leadership that Marta Ortega now assumes occurs “faster than expected.” “We think that the changes are bad news for Inditex. We expected a smoother and more orderly transition period, with Isla supervising in a non-executive role. Both Ortega and the new CEO, Óscar Maceiras, have a lot to prove when it comes to their ability to manage the great monster in the middle of the COVID crisis “Alantra told Reuters.

Forbes magazine emphasizes that Inditex’s strategy involves “Leave the largest multinational in the world under the control of the family” After a decade of management by “outsiders” and, like other media, it is clear that the daughter of the founder of Inditex “has not had an official title in the company nor has she been part of the crew.”

The specialized media make a cursory profile of the new president of the textile giant. Bloomberg defines Marta Ortega as “less shy” than her father Amancio because it has been seen in “relevant fashion events around the world” and “is related in dazzling social circles.” Her “equestrian passion” comes to the fore, as does her first jobs at the company as a sales clerk. “Ortega will have to face new and competitive threats, such as the online sale of companies like SheIn and Zalando SE that gain market share “, warns Bloomberg.

The Wall Street Journal and The Financial Times also echo the executive renewal at Inditex. The first medium highlights that the 37-year-old heiress “rises to the top” of “the largest fashion company in the world”; the second highlights that Amancio Ortega “completes the generational renewal”, while accounting for the stock market crash.

Support and criticism in politics

The mayor of A Coruña, Inés Rey, describes the appointment of Ortega as “logical generational replacement.” In Madrid, the leader of the PP, Pablo Casado, supported Isla and wished the president luck; We can questioned the change with a message on networks: “The meritocracy is the parents, never better said.”