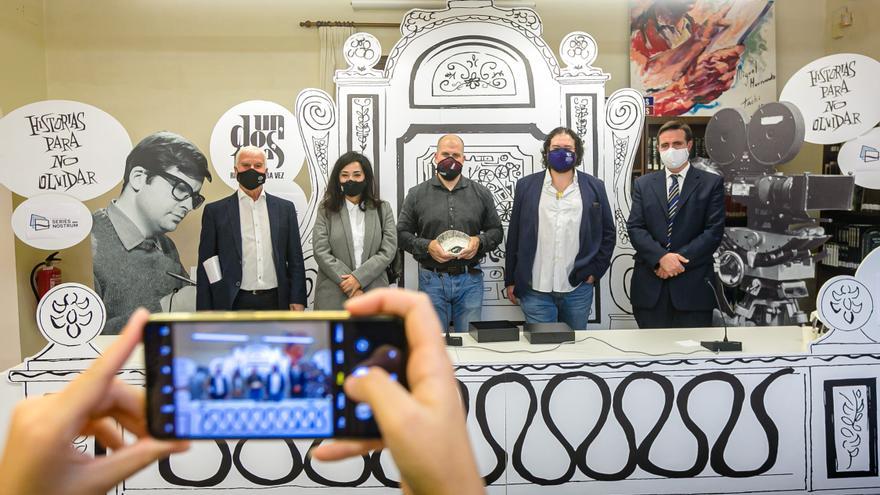 The first edition of It is our series began yesterday with a tribute to one of the quintessential creators of television we know: Narciso Ibáñez Serrador. During the event, the tribute exhibition to his life and work ‘An extraordinary life’ and the award was given in recognition of his career, being collected by his son Alejandro Ibáñez, who expresses that these types of acts are very important, because “there are many people who have left their lives doing their work and this is a magnificent way of thanking everything they have done for the culture and for its public ”.

The opening ceremony was also attended by Jaume Llinares, mayor of Altea; Herick Campos, General Director of Tourism (INVAT · TUR); Tatiana Sentamans, Vice-rector for Culture at the UMH; and of Carlos Jose Navas, director of the Nostrum International Festival Series.

The Festival will feature a attractive program that will develop from today and until November 29, integrating round tables, projections and meetings featuring creators and characters from series of great social significance. On this occasion, a hybrid format has been chosen, combining the facet and online facet, to offer all the guarantees in health matters.

The Festival will have an attractive program that will run from today until November 29.

The organization of Festival Internacional our series is in charge of Outside Series Productions and Series On Association, In collaboration with Altea Town Hall, Learn · tour (Valencian Institute of Tourism Technologies) and Valencian Institute of Culture, and has the support of Renfe, Grupo Servidauto, Caixaltea, Bocopa, Hotel Altaia, CREA SGR, Costa Blanca, Miguel Hernández University and Casa Mediterráneo.

4 Awards to reward talent behind the camera

Series Nostrum delivered yesterday, during the opening ceremony, the first of the four prizes planned. The recognition of an entire career dedicated to the world of television and theater to the great Narciso Ibáñez Serrador, marks the beginning of an award that will adopt his name from this and for future editions, and which will be known as ‘Chicho Ibáñez Serrador Award for Career’.

Alejandro Ibáñez received the recognition of a whole career dedicated to the world of television and theater to the great Narciso Ibáñez Serrado.

And it is that, in the words of its director Carlos José Navas, “One of the foundational objectives of this Festival is to value the creative part that exists behind the camera, highlighting the work of creators and screenwriters.”

In addition, Alejandro Ibañez highlights the importance of this tribute and emphasizes that “it is a pride for me and my family, this type of act, personally, is very emotional and keeps the memory of his life and career alive.”

The delivery of the other three awards is reserved for the closing gala on Saturday, November 28, and will have the presence of the creators of the award-winning series, as well as some of its protagonists.

The legendary series ‘Al leaving class’ laid the foundations for others such as ‘Companions’, ‘A step forward’, ‘Physics or chemistry’ and, the most recent, ‘Elite’, to have their opportunity on television years later and they will enjoy the same fame; that is why the ‘Legacy Award’ recognizes his heritage in this edition.

Tatiana Sentamans, Vice-Rector for Culture at the UMH.

For its part, the moving story of Miguel Ángel Tirado in ‘El Último Show’, of significant media reach despite a modest budget compared to that of the big productions, is the bet of Aragón TV that has deserved to win the ‘Repercussion Award’. The international social phenomenon, ‘#Luimelia’, will be recognized at the Festival Series Nostrum in the category ‘Conscience Award’ for his ability to confront social taboos and defend the expression of free love.

Susanna Guerrero, visual artist and professor of the Fine Arts degree at the Miguel Hernández University, who has created the statuettes for the Series Nostrum Awards, also attended the event.

Today begins the first of the four thematic cycles with which this type of television fiction will be approached from a complete perspective. The premiere occurs with ‘To not sleep’, an approximation to crime and horror genres through two round tables in which Tatiana Sentamans (UMH Vice-rector), Elena Romea (SPANISH FEAR), Ángel Agudo (Screenwriter of Sweet Home and El Punto Frío), Luis M. Rosales and Alejandro Ibáñez will take part. The afternoon will be devoted to the screenings of two classics by Chicho Ibáñez Serrador, ‘Stories to not sleep: the asphalt’ and ‘The Man who sold his laugh’, and that of the thriller ‘Urubú’ by Alejandro Ibáñez.

The week of November 23 will begin full of activities.

“Mainly ‘Vulture‘is a tribute to my father and his cinema, especially to his film’ Who can kill a child ‘. It is about a family that is going through delicate moments in their relationship and they undertake a journey together to reinforce their love and to be able to photograph a difficult bird to find ‘El Urubu’, on the trip they lose their daughter, and during the search they confront and they face very complicated situations, ”explained Alejandro Ibáñez.

The Week of November 23 will start full of activities. The cycles ‘Producing series’ and ‘Series and Tourism’ will occupy the days of Monday and Wednesday, respectively, with round tables and screenings from AMC-Sundance and Movistar +. In addition, on the same Monday, there will be a meeting with the actors of L’Alquería Blanca, hand in hand with the regional television À Punt.

During the afternoon of Friday 27 there will be screenings of the three winning series.

The Friday, November 27 will be for ‘Creators‘; the directors Inés París, Inma Torrente and Lina Badenes, and the screenwriters Aurora Gracià Tortosa, Diana Rojo and María Mínguez will take the floor to narrate in first person how women live and work

national and international success series most outstanding of the moment.

“Now is the most necessary time to carry out this type of event, these are bad times for culture in general”, highlights Alejandro Ibáñez.

During the Friday afternoon 27 will be carried out screenings of the three winning series in the Social Center of Altea. The main course will arrive the next morning, prior to the closing gala, with meetings with creators and protagonists of the series awarded at the Festival.

Alejandro Ibáñez will participate in the round table of ‘To not sleep’, an approach to the crime and terror genres.

The meeting dedicated to ‘#Luimelia’ It will be the first to be held and will feature Borja González and Diana Rojo, creators of the series, Carol Rovira and Paula Usero, protagonists, as well as Montse García, director of Fiction at Atresmedia TV. Next, it will be the turn of Pascal Jongen and Eduardo Zaramella, creators of ‘Al Leaving Class’. Lastly, the appointment with those responsible for the Aragón TV chain will allow to know all the details about the laureate ‘El Último Show’.

Series also for the little ones

Thes Sundays, November 22 and 29 at Plaça Mestre la Música, the little ones can also enjoy the series by attending mask, bookmark and hama beads workshops, or competing with the ‘Party TV series’ and the ‘What series am I?’ activity. In addition, the Social Center of Altea will host the screening of favorite children’s series from Canal Panda.