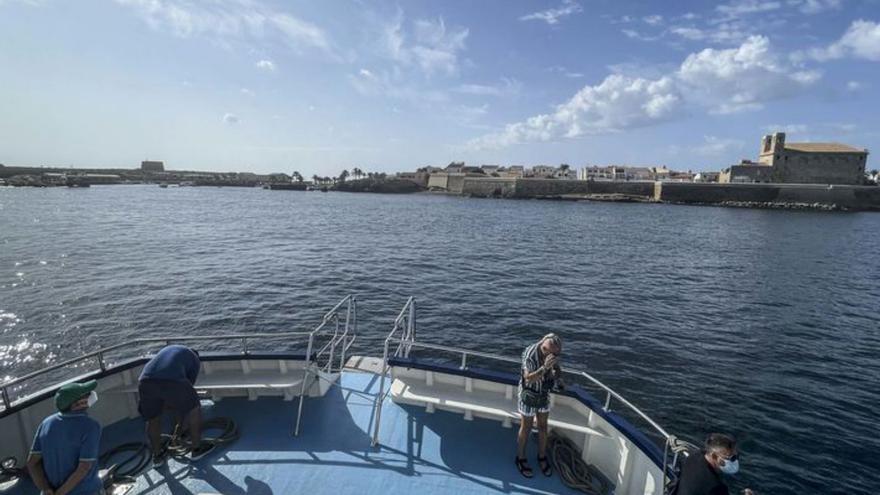 Today, an interesting excursion to get to know one of the most emblematic places in the municipality of Alicante, our island of Tabarca. For this, our meeting point will be at the Paseo de los Mártires de la Libertad, a walk that runs in parallel with the Esplanade of Spain and the Levante dock, where the tabarkeras are located, which are the taxi boats that provide the service to navigate. to our destination.

The island of Tabarca |

After leaving the mouth of the port we can see an impressive image of our city, especially the Castle of Santa Barbara, a historical monument of the city of Alicante and which deserves a monograph on our following routes. You can also see the imposing Carbonell Building, a jewel of our constructive modernism.

The island of Tabarca |

We continue with our navigation and appreciate the San Gabriel neighborhood, which was once a small fishermen’s neighborhood and that separates it from Alicante through the well-known Las Ovejas ravine. Looking at the coast at all times, to the left we can see another construction of blocks of buildings known as Urbanova, which is located about 5 km. of the municipal term of Alicante. This large urbanization is located on the Playa de los Saladares, being a beach of just over a kilometer and a half of fine sand that in its extreme part towards the west preserves a cordon of dunes that separates Urbanova from the next urbanization or area known as los Arenales del Sol. To the north of the urbanization is the Agua Amarga Beach with the salt marshes at the back of the beach.

The island of Tabarca | PILAR CORTÉS

We are approaching the Island of Tabarca and we pass in front of Cabo de Santa Pola which is a cliff formation about 144 meters high and that at its end marks the end of the bay of Alicante. At the highest point is a Renaissance watchtower known as the Watchtower and next to it, the lighthouse. At the lowest point, at the base of the cape, there is a building known as the Torre d’en Mig from the beginning of the 20th century, where the police used to stay to monitor and control smuggling on the coast. It is currently the CIMAR (Marine Research Center)

We arrived in Tabarca after sailing about 11 nautical miles that has taken us about an hour of navigation. Tabarca is the only inhabited island in the Valencian Community of about 1,800 meters long and another 400 meters wide and that more than an island is a small archipelago made up of other islands or islets that are La Cantera, La Galera and La Nao.

Formerly it was known as the Flat Island where at the time it was a refuge for Berber pirates. In the 18th century, King Carlos III rescued several Genoese fishing families from the Tunisian island of Tabarka, and lodged them on Isla Plana, becoming known as the Island of Nueva Tabarka. Carlos III ordered to fortify and build a town to house these families. Today the walls that surround the town center, as well as the town center itself, are declared a Historic-Artistic Site and Asset of Cultural Interest.

We begin our visit once we arrive at the port where we find the Nueva Tabarca Museum, an old building known as the Almadraba, used mainly for tuna fishing. We reached the walled perimeter and passed through the Puerta de Levante or San Rafael, which is located to the east and served as a transit between the city and the countryside. We continue towards the west and we find the Puerta de Alicante or San Miguel that overlooks a cove where the old port was located and of which only a small footprint in the form of a breakwater remains. Finally, we reached one end of the island to the west and we came to the Puerta de la Trancada or San Gabriel, where there was an old quarry from which the stone was extracted for the construction of the town. As a curiosity, at this point burials and dumps from Roman times have been found.

In front and following the road towards the center of the town we see the Church of San Pedro and San Pablo of baroque style, construction of a single nave and side chapels. It has two doors or entrances, one towards the west and the other towards the south façade. Under the church you can see three vaults with some graves. Next to the church the house of the priest and the school were built.

We continue our walk until we reach the Governor’s House, a two-story construction with large spaces supported by large intermediate arches, this house being restored and currently housing a hotel. To the right the main beach of Tabarca or Almadraba and in front we see the Torre de San José. To get there we would have to cross the Puerta de Levante again and get to the island’s countryside. The Torre de San José is a construction with a square and pyramidal base with small access stairs on one of its facades. This building was used as a state prison during the 19th century and in the period of the First Carlist War, 19 sergeants from this side were shot.

At the end of the field of the island is the lighthouse and the cemetery. The lighthouse is a large building that served as a school for lighthouse keepers. In 1971 a concrete one was built next to it and in 1998 the latter collapsed to recover the original.

After our visit and before returning to our point of origin, we can enjoy its waters full of marine fauna because in 1986 it was declared a Marine Reserve being one of the first in Spain, or visiting one of its coves and for its Of course, enjoy its gastronomy such as rice dishes and the popular cauldron in some of the restaurants.

one of the most emblematic places of the municipality. Visiting the island offers multiple attractions throughout the year. 1 Arrival on the island in the tabarkera.

2 The sunsets in Tabarca are a privilege.

3 View of the lighthouse.

4 The gate of Alicante, part of the wall and in the background the church of San Pedro y San Pablo. F