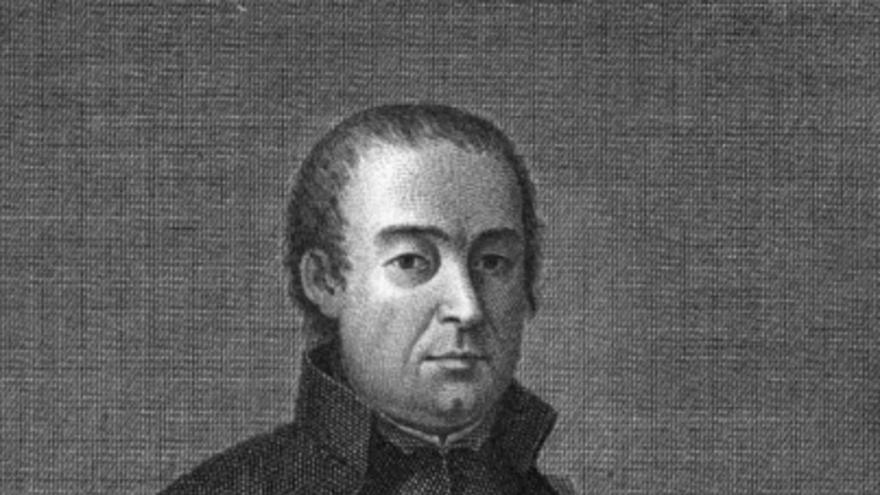 Juan Andrés y Morell (Planes, 1740 – Rome, 1817) was one of the more than five thousand Jesuits expelled from Spain by the monarch Carlos III, priests who were forced into exile in Italy after a painful pilgrimage on the island of Corsica when their entry into the territory of the Italian peninsula was rejected when Pope Clement XIII refused to accept them in pontifical territory. Some of them welcomed, once again in Italy, the goodwill of powerful families who received them with open arms and, in some cases, such as that of Juan Andrés with the Bianchi family, they were appointed tutors of their children. Others were favored because this well-to-do nobility made vast libraries available to them and put them in contact with the Italian Academies of Science. Juan, one of these privileged ones on his own merits, would visit innumerable cities, such as Ferrara, Mantua, where he would spend his happiest moments, Bologna, Florence, Naples and Rome, among other places on the peninsula shaped like a boot.

The Italian walks of an expelled Jesuit

As Antonio Mestre points out in the prologue that opens the book by Enrique Giménez, one of the leading specialists in the academic world on the expulsion of the Jesuit order from the domains of the Spanish crown, this documented work allows us to follow the vision that the priest Alicante had the culture of the XVIII.

Juan Andrés, and this is one of the chapters that most interests this historian who writes to them and who has dedicated part of his work to the travels and travelers of the Enlightenment and Romanticism, he visited those cities from where he could imbibe the wisdom that their universities, scientific institutes and their learned characters distilled, a matter that is perfectly described in the «Family Letters» that he wrote for the personal consumption of his brother Carlos but which would later allow him to popularize them in Spain, perhaps thinking of a hypothetical sorry and back. The descriptions of his visits to the main Italian cities represent a wise and thoughtful vision of a scholar who suffered in Rome that ecstasy that decades later Henri Beyle suffered in Florence. Juan Andrés succumbed to his feelings when he suffered the syndrome of the eternal city, the magic of the Roman capital, when both, first Juan and then Stendhal, felt that so much beauty together hurt them …

The emotion he felt when contemplating the Neapolitan bay is a beautiful description of a city in which he almost coincided with Goethe on his renowned trip to Italy and Sicily, a German writer who always regretted not having been able to meet the man from Alicante. Andrés observes and writes absorbedly: «Vesuvius giving off fire and smoke, many boats from the port, the castle, the two points of land that are engulfed in the sea, the island of Capri …»

The admiration that Juan Andrés leaves us in his writings can be read in his descriptions of the Coliseum, the Capital Museum or the Pantheon of Agrippa, «wonder of the intelligent». A follower of Winckelmann’s artistic theories, when modern archeology began to move forward, the Alicante priest became friends with key figures from the 18th century in Valencia, such as the botanist Cavanilles or the Mayans brothers, through an extremely interesting correspondence.

The Jesuit of Planes has in his fundamental work Origin, progress and current state of all literature, originally published in Italian in seven volumes between the years 1782 and 1799, a work that was immediately adopted as the fundamental text of the Reales Estudios de San Isidro , a Spanish governmental institution that gladly accepted the writings of that scholar who had been expelled from Spain and who was not allowed to return. An immense work that was translated into several languages. Andrés always remained faithful to the Society of Jesus, highly qualified by his literary works and by his ability as a great diffuser of Spanish culture, a culture that he defended with all his might from his Italian exile, he was such an important character that, As Leandro Fernández de Moratín would point out, “no one leaves Mantua without having visited the Alicante abbe”.

Also Read  Black Friday 2021 on Amazon: 10 warehouse products you can find for more than 20% off

In case there was any doubt about his ability as a creator of comparative literary history, two hundred and eighty-one year after the birth of Juan, Professor Enrique Giménez makes it crystal clear in this excellent work on the priest of Planes, a man from Alicante who lived longer. years in his forced Italian retirement than in his homeland.

The last chapter of this revealing book by Giménez López is one of those that leaves the reader with a deep memory of a character who never enjoyed the popularity he undoubtedly deserved and presents a Juan Andrés who in 1815 underwent surgery for cataracts that They prevented him from reading and writing, an operation from which he suffered tremendously. Soon, the Alicante-born man left Naples and settled in Rome, in the Jesuit church of the Gesú. On January 12, 1817, after being received by the Pontiff Pius VII, whom he thanked for the restoration of the Society of Jesus, and having complimented His Majesty Carlos IV, the Alicante priest died in the Professed House in Rome.

With Juan Andrés disappeared, in the words of the historian Miquel Batllori, “the most complete model of encyclopedic erudition of the seventeenth century and, at the same time, one of the most universally famous Spaniards in his time.” For the few connoisseurs of his work, Juan Andrés y Morell, from Alicante from Planes, and to whom the Alicante Institute of Culture Juan Gil-Albert paid a heartfelt tribute on the anniversary of his birth and to whom, perhaps, he owes a monograph of Canelobre magazine, was an intellectual of European mentality and diffusion who remained exiled for fifty years. Now, a century later, Enrique Giménez rescues him from oblivion.