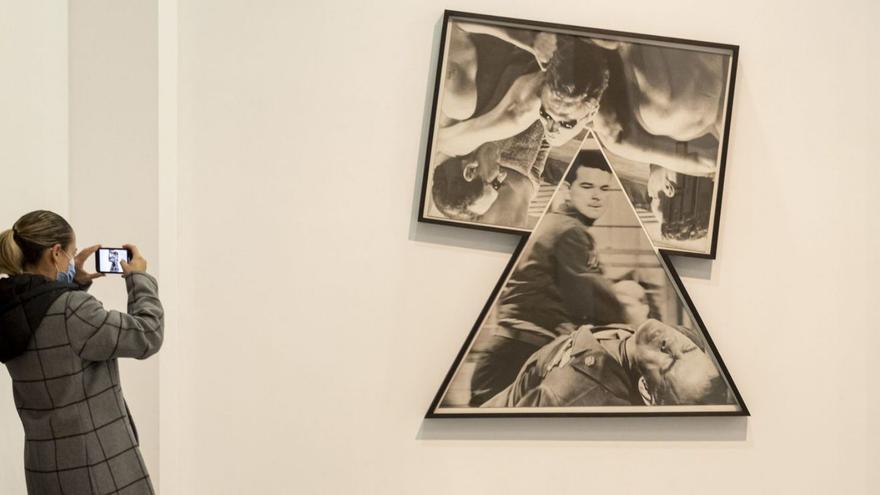 “The title of the exhibition, Photography in the Middle, wants to highlight the relational nature of photography, as an intruder in our lives and in the arts, and its ability to develop new discourses”, explains director Nuria Enguita.

«In this way, the exhibition shows how photography, from 1950 and, above all, from the sixties, beyond its value as a mirror of reality or memory of the past, becomes time, theater, narration or archive ”, clarifies Enguita. In other words, photography “not as a reflection of reality, but as a construction of other realities, as an instrument for assembling new artistic communication devices.”

The selection of creators includes from the new documentary film by Robert Frank and Lee Friedlander; productions of pop and post-pop art with John Baldessari, Cindy Sherman or Richard Prince; the different drifts of conceptual art and action art with Gordon Matta-Clark, Hamish Fulton or Valie Export; the theme of the archive with Bern and Hilla Becher; the visual power of the new German objectivity of Thomas Ruff and Candida Höffer; the narrative strategies of Douglas Gordon or Gillian Wearing; the archive’s work with Akram Zaatari; the landscapes of Bleda and Rosa; the questioning about the veracity of Joan Fontcuberta or the compositions of Pilar Beltrán.

Some of the images from the exhibition Photography in the Middle at the IVAM in Alcoy. | JUANI RUZ

The curator of the exhibition, Enric Mira, highlights that the notions of footprint, narrative and concept are woven into the exhibition discourse as a reflection of the plurality of the photographic in relation to art. «In the first place, as a trace, photography is a material inscription of reality capable of generating a tangible link with the world and with others. Second, as a narrative, photography has the quality of representing the world by analogy in order to reveal or document it, but also to relate it and, on occasions, invent it. And finally, as a concept, photography has a cultural dimension that avoids the subjective dreaminess of images, stimulating the critical thinking of those who perceive them.

All the works in the exhibition come from the IVAM Collection, a museum «pioneer in Spain in the creation of a photographic collection that has been essential due to the fact that it includes both works of a strictly photographic nature, as well as publications and documents in which it Photographic is matrix ”, points out the director of the IVAM.

For the mayor of Alcoy, Toni Francés, «this exhibition is a new example of the commitment to territorial structuring, which reinforces Alcoy’s position as Valencian cultural capital. At the same time, it is an excellent opportunity to enjoy the IVAM photographic collection, which covers national and international talent in the field of photography in such an exhaustive and diverse way, especially during the second half of the 20th century ”.

The IVAM reviews its photography collection in Alcoy since 1950