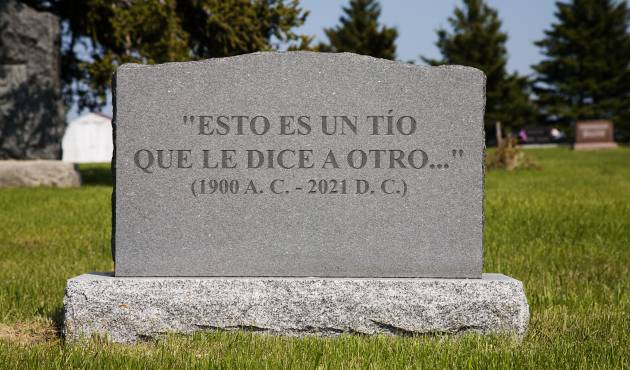 -This is a guy who goes to the doctor …

-The husband who tells his wife …

These outbursts of jokes sound ancient, as if this article, rather than humor, is about archeology and history. And there is some of that because telling jokes is something increasingly forgotten (and not only because of the pandemic). Classic jokes, those anonymous capsules of humor that circulated, especially orally, are less and less popular and have been giving way to memes for years. We no longer tell jokes, but we send videos, screenshots of tweets and other publications on WhatsApp. Even when we are with someone, it is very likely that we will send them the last thing that has arrived or, worse, we will show them, showing them our mobile.

The comedian and screenwriter Pilar de Francisco believes that as long as Karlos Arguiñano and Arturo Valls remain on television, the joke will never completely die. Despite the work of these two giants of humor (to be said without any irony), De Francisco agrees that the panorama has changed in recent years: before these jokes were told by one, “the funny man of the group. But now the whole the world participates and forwards to WhatsApp groups ”both memes and conventional jokes, only adapted to a more visual format.

It happens in groups, bars and also institutes. There are no studies yet (at least, we have not found them after asking a couple of universities), but we have carried out a very small and very informal survey thanks to Pedro Pérez, professor at the IES Antonio Machado, who asked about us a few students second year of high school during recess. Not only do they pass on memes, but they consider that “jokes are out of date.” But, in fact, the jokes sounded outdated as early as 2005, before memes had the current spread: an article of The New York Times I considered them dead then, displaced by observational humor.

But how can such a popular form of humor be disappearing that, as we explained in this article, has hardly changed since the time of the Roman Empire and from which there are examples in Sumer, from around 1900 BC. C.? The answer is that, rather than disappearing, the joke is evolving and adapting, more or less as it has always done, and there is not that much difference with memes, despite what it may seem at first.

Jokes are usually short stories and their classic form is divided into two parts: a statement and a climax in the form of punch line or punchline, which Jim Holt describes in his book Stop Me If You’ve Heard This, as “a little verbal explosion caused by a sudden change in meaning.”

We find this structure in much of the material that reaches us on WhatsApp groups and is especially evident in tweets. For the comedian and screenwriter Paula Púa, tweets “are the new short jokes.” Compare them to one-liners, short jokes that can be written in one line, such as those told by comedians like Steven Wright, Demetri Martin and, in Spain, Luis Álvaro. In a telephone conversation he gives as an example this tweet, which is perfectly comparable to a classic doctor joke:

– Doctor, how is my husband?
– We lost it.
– Don’t talk nonsense, if I see your feet under the sheet.

Pilar De Francisco recalls that, in addition, in networks and in groups, this structure of approach and auction can also be appreciated in the form of dialogues between different users, such as when answering someone using, for example, gifs of Belén Esteban or screenshots of the videos of Pantomime Full. When someone responds like this to a newspaper headline or a politician’s statement, “actually, he is making a joke.” The statements work as an approach, even if it is involuntary, and the gif or the screenshot is a punchline. It is a structure comparable to that which could occur in a private conversation with a humorous response or even in the performance of a comedic duo.

Another feature in common between memes and the classic joke is orality, although it may not seem like it at first: social networks and messaging applications are an environment halfway between the formal areas of written language and the more informal areas of orality. Delia Rodríguez summarized it in Memecracy: the virals that rule us: “With the new digital culture we are living a return to the oral after five hundred years of dominance of the written, marked by the invention of the printing press, the so-called Gutenberg Parenthesis”.

There isn’t that much difference between telling a joke in a bar and forwarding it. As Gretchen McCulloch writes in her book Because Internet (Because internet), It is a matter of records: we were used to formal oral language (that of a speech, for example) and informal (a chat with a friend). Also to read formal texts (articles, books). But what has grown with the internet is informal written language, which until the emergence of social networks and messages was confined to notes, letters and newspapers. “The Internet did not invent informal writing,” says McCulloch, “it made it more common.” And that’s why we write and forward the jokes that before we only told out loud.

There is another similarity between conventional memes and jokes: they often work in cycles. For example, in the 80s and 90s, Lepe’s jokes became popular, without anyone knowing very well who came up with the idea or why they became fashionable, only to disappear shortly after due to exhaustion. Meme cycles work in a similar way, but much faster: a format or template can become popular and disappear (or take a back seat) in a matter of weeks or even hours.

Despite what we just discussed, there are also differences between jokes and memes. First, the visual component. WhatsApp, Twitter, Instagram and other platforms allow you to send photos and videos, and memes are very often retouched images, perhaps more like a cartoon than a classic oral joke.

Pilar de Francisco works as a screenwriter in Late Motiv and he says that sometimes brief fragments of the program “totally out of context, but they work” come to him via WhatsApp. The comedian also recalls that “for example, Comedy Central with our old monologues is doing something similar: a photo of the monologue and underneath a single phrase.” It can be forwarded without having to look for the monologue and without even meeting the comedian, but without losing that photo that works as a signature.

And this is the second big difference from classic jokes: memes are not always anonymous and we often meet and quote the author. This is not exclusive to social networks, but rather has to do with the evolution of humor in recent decades, as we detailed in this other article. Jokes were seldom put in writing, and when they were, whether in the Philogelos, from the 4th or 5th century, or in the “facet books” that began to be compiled from the 15th century, no one remembered who their author was.

Until relatively recently it was common for many comedians to confine themselves to telling well-known and interchangeable jokes. One could repeat a joke from a comedian from Do not laugh that is worse o de Genius and figure without running the risk of plagiarism (with exceptions such as Pedro Reyes). This was not the case with the jokes of Gila or Tuesday and 13, who were even quoted at recess or in bars, and it would not happen later with the jokes of stand-ins, in which there is a more personal style. It should be remembered that a stand-up writer also writes jokes, although not always respecting the classic format, but in a freer way and, often, very personal and recognizable.

This own style and the fact that many people know them from having seen them on television or on YouTube makes us often cite the author of the occurrence. Púa says that this happens especially with Ignatius Farray and David Broncano. And not only with his jokes, but also with phrases and expressions. Broncano’s “capachao” is easily assimilated to the “fistro” or the “I don’t feel my legs” of television characters from the 80s and 90s, only now it is also shared in the form of a gif or image.

Total, perhaps the joke is not dead or old-fashioned, but has simply mutated and has changed its skin without us having fully realized it.