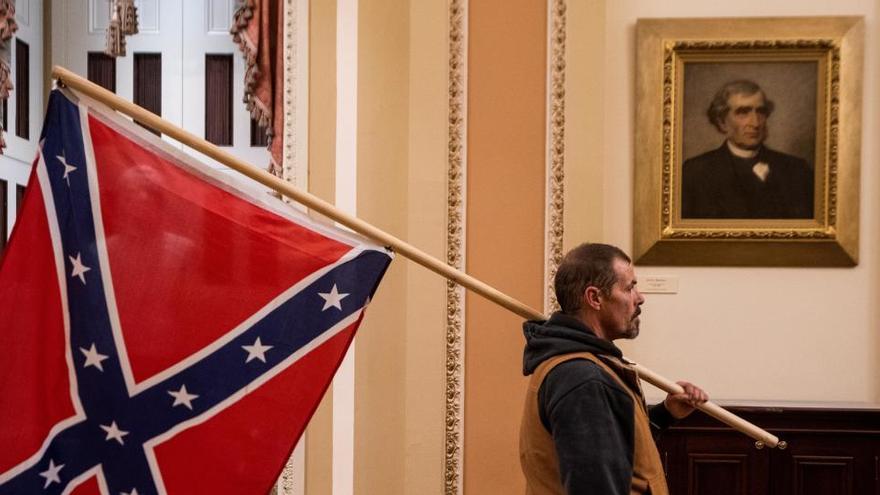 Weeks of unfounded repudiation of the president of the United States, Donald Trump, against the election result of November 3 have led to a scene of chaos and violence in the country’s capital, Washington DC, where hundreds of supporters of the president have starred a bizarre assault on the Capitol, repudiated by practically the entire political spectrum, in what is the most important translation of the conspiratorial rhetoric championed by the US leader a few days after his departure from power, and which has resulted in at least four deaths.

The assault began around 8:30 p.m. (Spanish peninsular time) this Wednesday, two hours after the US president appeared before his supporters to proclaim yourself the winner of the electionsand I will assure you that “I was never going to admit defeata “against the president-elect, Joe Biden, on a day, in addition, in which his Republican Party would have lost control of the United States Senate after the victory, according to the main estimates, of the two Democratic candidates in the elections in the state from Georgia, Raphael Warnock and Jon Scoff.

“ We will never give up. We will never acknowledge defeat. It will not happen. You don’t declare defeat when there is a robbery involved“Trump had declared at the culmination of weeks of allegations of voter fraud, never backed by the nation’s courts despite his legal efforts.” We have won this election, and we have won it overwhelmingly“, he proclaimed before some attendees fired up for two weeks, after the first announcement of the call, and after days in which the president had retransmitted through his prolific Twitter account several messages from conspiracy theorists about the unfounded electoral “theft”.

The president addressed his supporters after starring, behind the scenes, in the umpteenth altercation with the Republican Party, in particular with its most prominent figure in the White House, the vice president. Mike Pence, his last bulwark to annul the electoral result.

According to CNN sources, Pence reportedly refused to accept Trump’s request to reject the vote of the Electoral College delegates that would certify Biden’s victory, in what would mean a definitive break with his party, despite the alleged support of 150 Republican legislators, led by Texas Senator Ted Cruz, to repudiate the election results. Cruz himself has condemned the riots, in what appears to be the end of all Trump’s paths to claiming electoral victory.

Assault on the Capitol

Two hours after Trump’s speech, Hundreds of protesters broke through police barriers and stormed the Capitol at the same time that the senators were debating the vote certifying Biden’s victory. Without any intervention from the authorities, protesters – many of them disguised – entered the facilities of the headquarters of the US Congress, including the office of the leader of the Democratic majority in the House of Representatives. Nancy Pelosi. The police threw smoke bombs at the assailants, without success, while the senators were forced to interrupt the proceedings.

“This is what happens when you provoke us“, proclaimed one of the participants in the protest, identified as Anselm and from Louisiana.” I have put my hands on the Capitol to ask that our country be freed from all evil. We are in the hands of God, “he declared.

The deputies have waited inside the voting chamber, lying on the floor and wearing gas masks “while the Capitol Police tried to contain the entrance of the protesters into the bicycle. Finally, the room has been evacuated and the protesters They proceeded to roam at ease all over the place.

In the confusion of the assault, at least four people have died and several more have been injured.

Intervention of the National Guard and curfew in Washington

Around 11:15 p.m. the Police and the deployment of the National Guard managed to dislodge the crowd of the building, although many of the protesters remained in the vicinity in the hours afterwards.

The Capitol evacuated by the assault of supporters of Donald Trump. Video: ATLAS Agency.

The mayor of Washington, Muriel Bowser, has imposed a curfew on the city from 6:00 p.m. (local time), which will be in effect until 6:00 a.m. (local time) on Thursday, as reported through your account on the social network Twitter.

For his part, Trump has asked “please” support for the Capitol Police and the US security forces.

The president-elect of the United States, Joe Biden, has denounced the irruption in the Capitol of supporters of President Trump, who has asked to “defend the Constitution” and ask “the end of the siege”. “It is not a protest. It’s an insurrection“, said Biden, who has thus urged Trump to” show his face “on television and” demand an end to this siege “carried out by the” mob “of followers of the current president.

Biden has reproached the assailants for this “attack on the rule of law” perpetrated in Washington, a “bastion of freedom.” “Enough”, has riveted Biden. “The scenes of chaos in the Capitol do not reflect the authentic United States. They do not represent who we are. What we see is a small group of extremists dedicated to the illegality,” he added.

Immediately afterwards, Trump appeared before the public through a video posted on his Twitter account, with a devious message to his supporters, to whom has asked for “peace” and that “they go home”, without convictions and between words of recognition for them – “you are very special” – and again with messages about the alleged theft of the last elections.

I am asking for everyone at the U.S. Capitol to remain peaceful. No violence! Remember, WE are the Party of Law & Order – respect the Law and our great men and women in Blue. Thank you!

“You have to go home now“, he said, appealing to the need for” no one to get hurt “and to respect the security forces.” I know you suffer “, he has exposed some protesters whom he has called” not to enter into the game of these people “, without pointing to anyone in particular. Trump has insisted that the elections were” stolen “, something that, in his view,” everyone knows, especially the other party.

The parliamentary session goes ahead

After the abrupt interruption by the assault of Trump supporters the vice president of the United States, Mike Pence, has reopened the Senate session, which has overwhelmingly rejected a Republican proposal to annul the results of the presidential pasts in the state of Arizona.

In it, only six Republican senators have supported this proposal, including the representative for Florida Ted CruzWhile 93 others have voted against it, some of them recognized supporters of President Trump, such as South Carolina Senator Lindsey Graham.

After the session in the Senate, the vote has been carried out in the House of Representatives, where the proposal has also been rejected by Democrats and a large part of the Republican Party 303 to 121 against.

The House of Representatives and the Senate will meet again in a joint session to continue with the Electoral College vote counting and thus certify the triumph of Biden in the presidential pasts.