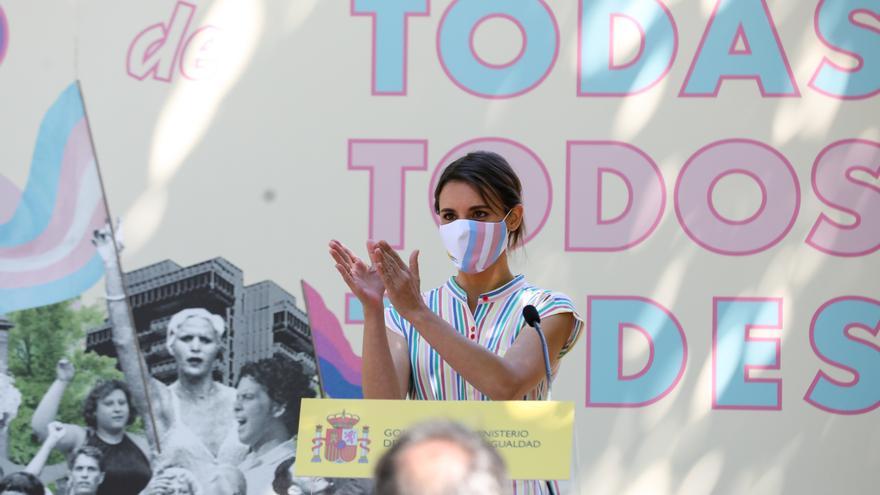 The Minister council approves this Tuesday the draft trans and rights law LGTBI, a norm that will allow the change of sex in the registry from the age of 14 without the need for a medical report or witnesses and that sees the light after arduous negotiations between the coalition partners.

The draft law for the real and effective equality of trans people and for the guarantee of the rights of LGTBI people finally arrives in the week of LGTBI Pride and represents, in the words of the Minister of Equality, Irene Montero, a new step historic after the approval sixteen years ago of the law of homosexual marriage.

As stated by that Ministry, gender self-determination is finally recognized and sex can be changed in the Registry with the sole declaration of the interested party, who must confirm his decision three months after submitting the first application.

The self-determination of gender was rejected at first by the first vice president, Carmen Calvo, and has cracked the left and feminist movements, since one sector considers that sex is an immutable biological reality and that the law will harm women and their fight for equality.

Last May the PSOE abstained when a proposal from several left-wing groups regulating the self-determination of gender reached the plenary session, which did not go ahead as it also had the rejection of the PP and Vox.

The draft will recognize the right to change sex from the age of 14, two more than what Equality raised in its first draft. LChildren between 12 and 13 years old will need judicial authorization to modify the registration mention of sex and any minor may change their name without the need for reports.

The Law for the real and effective equality of trans people and for the guarantee of the rights of LGTBI people establishes a mechanism to avoid the continuous change of sex and, with it, fraud of the law: people who have changed the registration mention of sex, to do so again they will have to obtain a judicial authorization.

The text will stop trans people from being considered sick in Spain, It will allow the filiation of the children of lesbian and bisexual mothers without the need for marriage and will guarantee the access of lesbians, bisexuals and trans people to assisted reproduction treatments..

Likewise, the draft bill will prohibit conversion therapies to modify the sexual orientation, identity or expression and genital modification surgeries of intersex babies and will establish a regime of infractions and sanctions – between 200 and 150,000 euros) that reverses the rules regarding the burden of proof when it comes to discrimination against the LGTBI group.

The government agreement between the PSOE and Podemos included the approval of a trans law and another law against discrimination against LGTBI people, but finally both initiatives have been brought together.

The main LGTBI associations, although they hope to introduce improvements in the parliamentary process, have welcomed the approval of the draft.

Next Saturday they will take to the streets in Madrid in the traditional Pride march with the slogan: “Human rights are not negotiated, they are legislated: Comprehensive trans law now. “