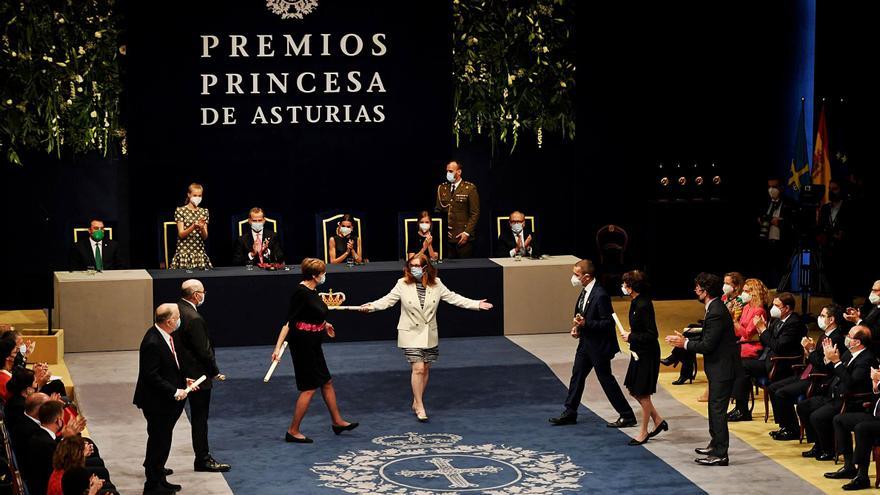 Don Felipe sent this message during the delivery of the Princess of Asturias Awards held at the Campoamor Theater in Oviedo and before whose audience he was congratulated that the health crisis has verified that Spanish society is “strong, responsible, mature, supportive and with great capacity for improvement ».

“The pandemic served to reaffirm the conviction about the benefit of working together and to understand that, only by working together for the common good of all, it is possible to face the most difficult situations and emerge victorious from it,” he remarked in a speech focused on consolidating recovery and in which he has had a solidarity memory for the inhabitants of La Palma due to the eruption of the volcano.

The changes arising from the pandemic, according to the king, have caused “imbalances and tensions” and have led to a scenario in which “it is not possible to isolate oneself, or walk alone.”

“Giving up is not an option, health workers told us in the worst moments of the pandemic. Fainting or conforming is not an alternative. It is necessary to move forward “, encouraged the monarch, who highlighted the response of the Spanish since March of last year,” the sense of citizenship, service to the community and loyalty to the country, basic pillars of a society capable of overcoming itself. ” However, he pointed out that it is not enough in these moments in which it is necessary to approach the future from serenity and calm.

“On this path we cannot forget our roots, our references, everything we have already traveled as a society, and the foundations of our coexistence in peace and freedom,” said the king, who also warned of the fragility of democratic values ​​that “are not given.”

For her part, Princess Leonor vindicated the role of young people, who “have a lot to contribute” and must be “important” to achieve a world “more sustainable, fairer and better for all.” Leonor de Borbón starred in her third speech at the ceremony and stressed that the winners are “an essential guide for everyone” by highlighting that “culture, science, solidarity are essential for life together.” In particular, for the new generations: “As a high school student, I think of all the young people who can do it and how much we can learn from you.”

“You project on us, the youngest, the certainty that we also have a lot to contribute, that we can be important and show ourselves responsible in trying to think about a more sustainable, fairer, better future for all,” he concluded.

According to the heir to the throne, the trajectories of the winners motivate her “even more” in her task of training. “Studying and observing your work fills me with enthusiasm and strength to continue assuming my responsibilities and always work with the greatest commitment.”

In addition to the kings and her sister, the Infanta Sofía, Queen Sofía followed the act from a box and from the stalls, her other grandmother, Paloma Rocasolano.

The swimmer Teresa Perales collects the diploma from the hands of Princess Leonor. | EFE / BALLESTEROS efe.oviedo

Intervention of the winners

The journalist and writer Gloria Steinem, 2021 Princess of Asturias Award for Communication and Humanities, affirmed that laughter is a proof of freedom in the face of the authoritarianism of figures such as Hitler or Stalin since it is “a free emotion, the only one that cannot be imposed ».

“You cannot force anyone to laugh, to laugh really and sincerely. By giving value to freedoms such as spontaneous laughter, we preserve freedom forever, “underlined the 87-year-old icon of American feminism.

A road in a wheelchair

The winner of the Sports award, Teresa Perales, holder of 27 Paralympic medals, focused her speech on the figure of her mother, Sebi, to whom she referred on a dozen occasions to thank her for that “I am here to help you”, and invited people to not let obstacles prevent them from fighting for their dreams.

“Who was going to tell me in 1995 when I heard the words ‘you are not going to walk again’ that the path that I was going to travel with my chair was going to take me here!” , before collecting the award.

“Our future depends on the world eating better,” said chef José Andrés, 2021 Princess of Asturias Award for Concord for his work at the helm of World Central Kitchen (WCK), who warned that “there is still too much hunger” and “a lot of work to do.”

The Spanish chef highlighted the urgency of feeding the planet “with hope” and of “building longer tables.” “The world has a better path ahead of us if we come to understand and make the power of food our own.”

“The possibilities of the technologies are endless” and allow ways to be investigated to prevent HIV and malaria, to reduce cancer or to treat many other diseases, according to Hungarian biochemist Katalin Karikó, awarded with Drew Weissman, Philip Felgner , Ugur Sahin, Özlem Türeci, Derrick Rossi and Sarah Gilbert with the Princess of Asturias of Scientific and Technical Research for the development of the first vaccines against covid.

Katalin Karikó said that the “incredible risks” that health personnel took in the toughest moments of the pandemic were her inspiration to “work harder and act to develop vaccines that save lives.”