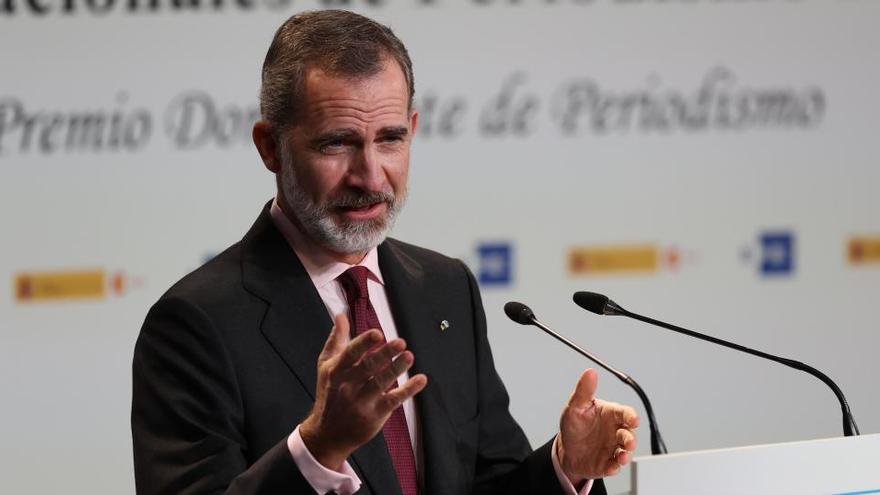 Felipe VI has considered this Tuesday that in times of health, economic and social crisis and with obstacles to mobility, journalism is especially necessary and has stressed that quality journalism is already a “social requirement”.

The King has defended this role of journalism in his intervention in the ceremony of delivery of the King of Spain International Journalism Awards and the Don Quijote Award, granted by the Efe Agency and the Spanish Agency for International Cooperation (Aecid) and which recognize the work of informants in Spanish and Portuguese languages ​​from Ibero-American countries.

An act in which the Head of State has been accompanied, among other authorities, by the Presidents of Congress and the Senate, Meritxell Batet and Pilar Llop, respectively; the Minister of Foreign Affairs, Arancha González Laya; and the president of Efe, Gabriela Cañas.

The head of state has made reference to the moment “of great uncertainty” that the world is experiencing as a result of the coronavirus pandemic and the effects it causes in all aspects of life.

In line with this, he has considered that journalism is always necessary, but that in these times of health, economic and social crisis, it is “especially necessary.”

“It is time to exercise journalistic leadership of authenticity and quality”, has added before giving these attributes to the works awarded with these awards and that he has considered exponents of journalistic work carried out with the utmost rigor.

Remembering the current context with so many obstacles to mobility and with citizens consuming and demanding more information, it is when he has highlighted that quality journalism, which provides reliable information, is increasingly a social requirement.

“Where there are good journalists, there is rigor, truthfulness, investigation and critical analysis. They are fundamental values ​​for the whole society that must be transmitted to the new generations, “added the monarch.

Don Felipe has congratulated the winners for some works whose values ​​he has said are the search for truth, rigor, informative credibility, defense of the environment and human rights.

The winners, who belong to Spain, Brazil, Bolivia, Colombia and Portugal, have assured that they are clear exponents of the excellence of journalism in Spanish and Portuguese, have pointed out corruption and injustices and have rescued from memory the fight for the rights of the individual and for free sexual orientation.

“The awarded journalistic stories consolidate the prestige of these awards (…) They are stories that shake consciences, and they do so in sister languages ​​that also enhance our common culture and that share the same outstanding, truthful and courageous journalism.”

Felipe VI has underlined that the six editions that he has presided over of these awards allow him to affirm that they represent a example of credibility, a great exponent of journalism exercised with the utmost rigor.

“Journalists like the winners today are fundamental,” he asserted to later refer to the great work of Agencia Efe as the world’s leading agency in Spanish, with 81 years of history and whose archive has received an honorable mention in this edition of the awards.

Along with his congratulations, he recalled the 24 million news items and documents that this archive keeps, its 20 million photographs (12 of them already digitized), the 300,000 documented and digitized videos and 20,000 reports that span from the 19th century to today.

In addition, it has considered the Don Quixote Prize for Journalism, also delivered this Tuesday, as a stimulus and recognition of the care and excellence of Spanish in the field of communication.