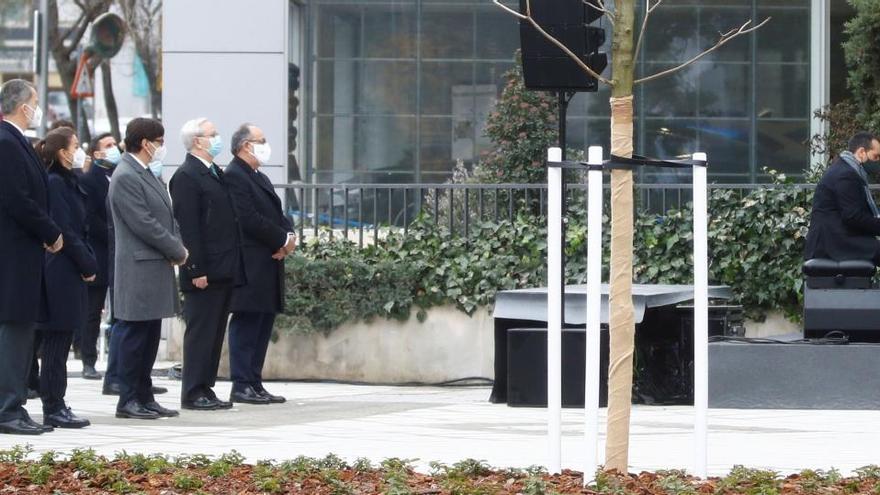 The kings have presided this Friday the inauguration of the monument that honors the work performed by all health workers during the pandemic and those who died in the exercise of their profession due to covid-19, in an act marked by shouts of “resignation” to the Minister of Health, Salvador Illa.

The sculpture, by the Barcelona artist Jaume Plensa and baptized as “The tree of life”, whose crown is a red heart, has been placed in the Plaza of the Sacred Hearts of Madrid, next to the Santiago Bernabéu stadium.

Along with the kings, have been Illa, the president of the Community of Madrid, Isabel Díaz Ayuso; the mayor of the capital, José Luis Martínez-Almedia; the Madrid Minister of Health, Enrique Ruiz Escudero, as well as the representatives of all the general health colleges.

Since the arrival of the minister to the square and until the ceremony has ended, citizens who were in the street and leaning out of the balconies on which Spanish flags hung have shouted “Illa, resignation” and have made insults like “murderer”, “scoundrel”, “you have lied to all of us” and “out of the picture”.

At the same timethey have cheered and applauded the kings, to Díaz Ayuso and Martínez-Almeida.

Before the boos against the minister, the mayor has assured that “We must respect that citizens can express themselves and give their opinion”, although he has admitted that “it is not pleasant to endure from public officials in general.”

“I always defend freedom of expression. I have told Illa that today it is your turn, as other days it has touched the rest of us, “Martínez-Almeida commented in statements to the media at the end of the event.

Before it began, the minister has been talking with the Madrid president and the mayor, in an image that was not given at the inauguration of the new Isabel Zendal emergency hospital in Madrid on December 1, since Illa declined the invitation to attend, citing agenda reasons.

The event began with a minute of silence in memory of those close to 120 health workers killed in the exercise of their profession during the pandemic, including 83 doctors.

The monument, whose meaning Plensa himself has explained to the kings, was originally conceived as a tribute to the deceased, but has finally been made I extend the recognition to the entire group.

The president of the General Council of Medical Associations, Serafín Romero, has paid tribute to all health personnel for having “the soul, the heart and the life” since the health crisis broke out last March.

“We could not leave a better legacy than the work that represents the best of the health profession”, Romero has remarked.

The sculpture has been donated by the Agrupación Mutal Aseguradora (AMA) in order to that “the recognition of health workers“, as stated by its president, Diego Murillo.

The work, made of stainless steel and more than seven and a half meters high and six tons in weight, represents a heart at the top of a column made up of letters from different alphabets.

The event concluded with the performance of the singer Luz Casal, who has performed her song “Entre mis memoria” accompanied by a pianist.