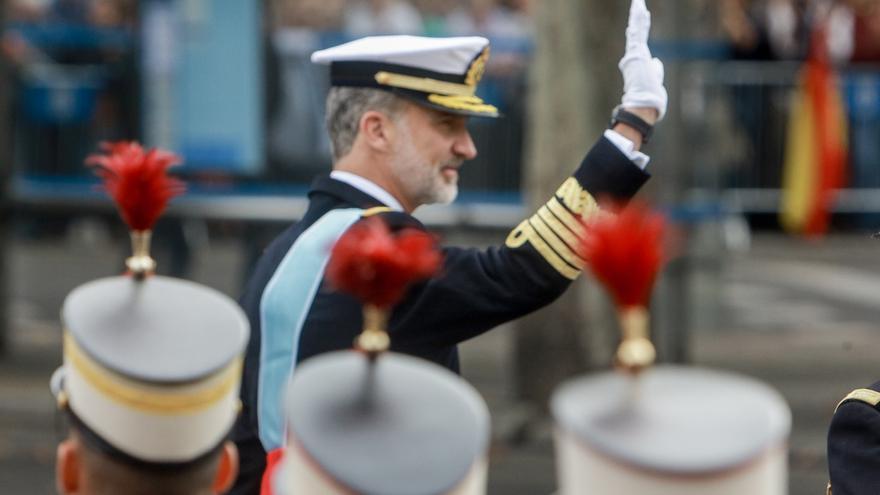 The Reyes will preside this Tuesday the parade for the Armed Force Day that will tour the center of Madrid for the first time since the Covid-19 pandemic began. A total of 2,656 military personnel, 68 aircraft and 115 vehicles They will participate in the military parade that will begin at 10:30 am and will run on Paseo de la Castellana between Plaza de Lima and Nuevos Ministerios.

The improvement in the health situation has allowed the recovery of the traditional parade for October 12, which last year had to be replaced by a reduced military act in the courtyard of the Royal Palace.

However, the number of participants in the military parade will be somewhat lower than in previous editions. There will also be restrictions on the subsequent reception offered by the Kings in the Royal Palace to avoid the concentration of people in interior spaces, according to sources from the Royal Household.

The economic and social agents will also attend, the Economic and Social Council and the Chamber of Commerce of Spain, the highest representatives of organizations, agencies and social assistance entities, members of the Spanish Olympic Committee and Tokyo 2020 flaggers and representation of the educational and cultural field.

The acts of this Day of the National Holiday will begin with the arrival of the Kings and the Infanta Sofía to the Plaza de Lima at 10.30 am. Princess Leonor will not travel to Madrid due to the sanitary regulations of the school of Wales in which she is studying this course, since she would be obliged to quarantine upon her return.

Along with the Kings will be in the parade the members of the Government, including the ministers of United We Can, and the regional presidents. The only absences will be the usual ones in Catalonia and the Basque Country and, in this edition, that of the Galician president, Alberto Núñez Feijóo, who will debate the state of the Region the next day.

There, the Kings will receive military honors and Felipe VI will review the troops, after which he will greet the authorities. Then the traditional parachute jump with the Spanish flag will take place, the most tense moment in the last parade after the jumper was hooked on a lamppost on Paseo de la Castellana. After that there will be the raising of the flag and an act of tribute to the fallen by Spain.

Then the air parade, in which a large representation of the aircraft of the Armed Forces and also of other public organizations such as Maritime Rescue or the Civil Guard will participate, in addition to the traditional Eagle Patrol painting in the sky the colors of the flag.

Then it will be when the land parade, first with the motorized echelon of the Armed Forces, the Civil Guard, the National Police Corps, Customs Surveillance and Civil Protection.

On foot first, a group of the Royal Guard and different groups of the Army, the Navy, the Air Force, the Military Emergency Unit (UME) and the Civil Guard will parade.

The parade will be closed by the Tercio Gran Capitán and the ‘King Alfonso XIII of the Legion brigade and the group of Regulares from Ceuta, with their characteristic steps.