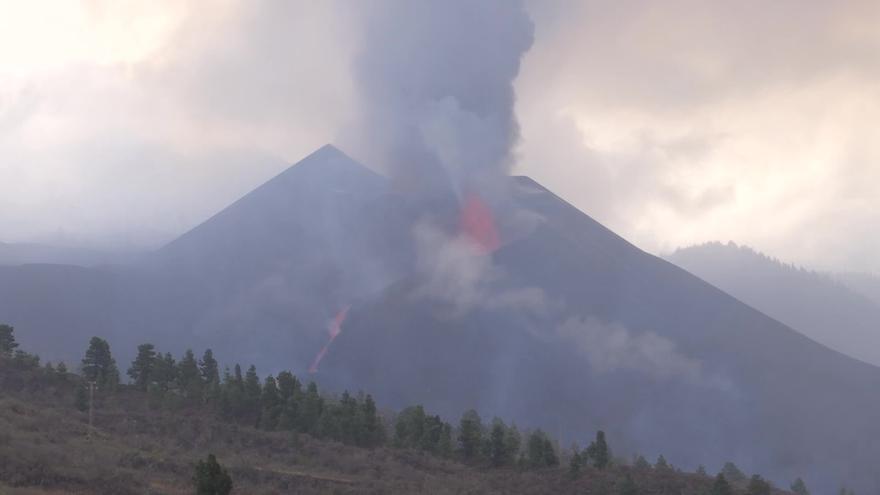 The Cumbre Vieja volcano on the island of La Palma It has been three months this Sunday the eruption began on September 19 with signs of exhaustion and the hope of being able to be completed in a short period of time.

During this time, it is estimated that the lava has affected some 3,216 buildings, of which 2,988 have been completely destroyed and 138 partially, according to the data from the satellite data of the Copernicus program.

The volcano has caused the evacuation of about 7,000 people, of which 2,329 had their homes and land among the 1,218.87 hectares of land in a perimeter of 68.9 kilometers that the lava has washed away. Currently, the number of people housed in hotels is 556. Of these, 390 are in Fuencaliente, 73 in Los Llanos de Aridane and 93 in Breña Baja, while the number of dependents housed in health centers remains at 43.

Lava from the volcano near La Laguna. Reuters

For its part, for those affected, the Government of the Canary Islands has created a office to unify petitions of the victims and the distribution of emergency aid launched by the regional Executive.

Similarly, in these months it has acquired homes that have already begun to be delivered to people who have lost their houses and, on a temporary basis, prefabricated houses whose installation has already begun have also been bought.

Likewise, according to data from the Cabildo de La Palma, donations worth 8.97 million euros have been received for those affected by the eruption.

However, the Cumbre Vieja volcano maintains the signs of exhaustion that have been recorded in recent days and the remaining gases in the vicinity of the eruption are worrying.

Refering to seismicityThe National Geographic Institute (IGN) has located four earthquakes on La Palma between 1.5 and 3.2 in magnitude since midnight and until 5:31 a.m., none felt by the population.

In this sense, the latest report from the National Security Directorate (DSN) indicates that the eruptive process continues without variations compared to the previous days. Thus, it adds that the absence of observable signs of activity both directly on the surface and from the surveillance systems corroborates the depletion of the natural phenomenon, although a new upturn in strombolian activity and emission of runoff is not ruled out.

Also Read  Former Minister Zaplana bought watches for € 20,000 but paid a salary of € 500 to his assistant

To conclude the eruption that began on September 19, the recorded and observable data must be kept in the current levels for at least seven days.

Impressive low reconnaissance flight over the eruptive centers of the #VolcandeLaPalma where the sulfur and salt deposits are observed, as well as the fumaroles. #IGME_CSIC #GES_Canarias. Click video here 👉https://t.co/vXBeOAUz4U pic.twitter.com/yDED7BjRG0

For its part, the Government of Spain has expected that before the end of 2021 they will have mobilized up to 230 million for those affected by the volcano in different aid packages, as explained this Friday by the minister, Félix Bolaños, after the Council of Ministers.

In this way, to the current date, 437 people have received compensation of the Insurance Compensation Consortium, which has already paid more than 60 million euros. In addition, 10.5 million euros have been approved for housing aid with which 95 have already been acquired and five more homes in the next few days. Of these, 15 properties have been delivered and another 138 potential beneficiaries have been identified to assign homes.

Aerial view of the main cone of the Cumbre Vieja volcano. Reuters

Aid for bananas and fishermen

Regarding the measures approved this Friday, they will be allocated 13.5 million aid to banana farmers, for an amount of 4,600 euros for each beneficiary; and another 17.62 million to support the self-employed and SMEs affected by the volcano, with which the tourism sector will be promoted.

This initiative includes plans for promotion of sightseeing to the island, aid to national and foreign airlines for 1.3 million to promote flights to La Palma, as well as a tourist bonus of 300 euros to stimulate travel in 2022.

At the same time, to facilitate and expedite the economic recovery of those affected, they may have a advance payment of 50% of the amounts of the aid without waiting for each file to be fully resolved and they may postpone their obligations with the Treasury until spring 2022, among other measures.

Among the approved measures is the increase in the maximum amounts per home, which will now rise to 60,480 euros in the event of total destruction of the home. These aids will be compatible with the indemnities from the Insurance Compensation Consortium and those from the Canary Islands Government so that those who have lost their homes can cover practically the total cost of their properties.

Updated report of the Emergency Management as of Sunday, December 19, at 8:26 am:

➡️ Access through Puerto Naos, La Bombilla and El Remo is not authorized by sea or land due to the presence of gases.

Likewise, it has been approved that the Government Delegation may grant advances on account of the 50 percent aid, so that it will not be necessary for the file to be fully resolved in certain circumstances so that those affected can gain in liquidity.

On the other hand, the Government will give a grant of 150,000 euros to the Canarian Institute of Culture to carry out cultural activities for the population of La Palma.

Likewise, those affected may defer all your debts until May 2, 2022 so that “they do not have to worry about tax obligations” in terms of social security and exonerates all seafarers until they can go back to fishing.

It will also facilitate that the Covid lines can continue until June 2022 and extends the aid of these lines to “all” companies on La Palma, given the drop in consumer demand throughout the island.

In terms of tourism, the aid package includes 4,625,000 euros to promote La Palma “once the eruption is over” and will launch a program of tourist vouchers of 300 euros articulated through virtual debit cards for exclusive consumption on the island of La Palma throughout 2022.

With this measure, which has a contribution of 3.3 million euros from the Ministry of Industry, Commerce and Tourism and an equivalent amount from the Government of the Canary Islands, the Executive seeks to encourage tourist trips to the island when normal conditions are met and support the sThe tourism sector, which is one of the activities that provides the most wealth and employment on La Palma.

In the same way, there will be another item of 10 million euros for direct subsidies to create new companies, expand existing ones or diversify products during 2022, 2023 and 2024. Finally, another of the measures includes 3 million euros to subsidize the international festival of science, art and music Starmus Festival in July 2022.