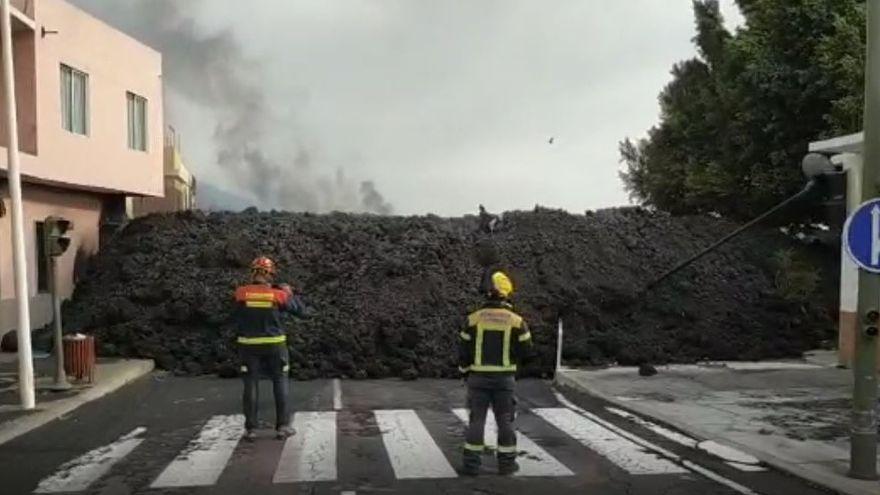 The volcano continues on its path of destruction. The neighborhood of La Laguna, a place chosen until ten days ago by the residents affected by the eruption to follow the evolution of the lava, was practically buried yesterday by the two streams that have been advancing north from the beginning of the week with the only opposition of the buildings, which allow their speed to be reduced at times. The gas station disappeared in the early afternoon and the solidified magmatic material continued its course until the neighborhood association collapsed last night and remained at the doors of the church. The ideal trajectory for scientists is for it to continue out to sea to feed the lava that is about to touch the ocean. The worst scenario, which surrounds the mountain of La Laguna from the north towards the sea, It was described as “undesirable” by the technical director of Pevolca, Miguel Ángel Morcuende, who acknowledged preferring not to enter to evaluate what measures would be taken if this hypothesis is confirmed until it occurs, if it occurs. Despite this desire, at night the Government of the Canary Islands decreed the evacuation of some 500 inhabitants from the Las Martelas payments in the municipality from Los Llanos de Aridane, and Marina Alta, Marina Baja, La Condesa and Cuesta Zapata in Tazacorte before this possibility.

As every day for just over a month, the first rays of the sun are those that put technicians, scientists and affected people in a situation. Those of yesterday arrived to fulfill the most pessimistic forecasts. The wash named number 8 (see on the map on the next page) had reached the Disa station, from which the water had been removed and the fuel in the tanks had been replaced to avoid possible explosions.. The 10 had traveled behind quickly along the Camino Cumplido and the Camino de la Cruz until slowing down at the entrance door of the La Laguna school, which it finally swallowed after destroying a new banana packing machine, the second during the eruptive process that has lasted for 32 days.

The advance was increased with the support of an “appendix”, as Morcuende called it, much more active than the rest, which was in charge of joining the two flows and pushing the 8 in its advance towards La Laguna. In a matter of minutes, the tongue gobbled up the gas station, advanced to the junction of highways LP-213 (Los Llanos – Puerto Naos) and LP-215 (La Laguna – Tazacorte) and, hours later, buried some paddle tennis courts and the neighborhood association. At the close of this edition, this branch was at the gates of the parish of this neighborhood of 1,735 inhabitants that has the same fate as Todoque, which was buried under lava ten days ago.

The forecasts before the flow of this language, which is the one that worries the Pevolca the most, they differ according to the direction it takes during the next few hours. The best of the cases is that it runs through a small valley that leads it to join the 7, which is practically stopped about 80 meters from the sea. This last wash has taken three days in which it has barely advanced 80 meters and has the municipality of Tazacorte on alert since if it touches the ocean water, the entire urban area will have to be confined to the possible presence of gases harmful to health. “It is a better possibility,” said Morcuende at the press conference held at the Cabildo de La Palma. Better because, obviously, “it would avoid a worse scenario,” as the Pevolca technical director continued.

That “worst” scenario he referred to at two in the afternoon is that the lava is directed north of the mountain of La Laguna towards the sea. This is what he called “undesirable” and who preferred to delay his analysis to “tomorrow [por hoy para el lector] or when that event occurs, which has not occurred. It was not necessary to wait until today. At nine o’clock in the evening, the Government of the Canary Islands decreed the eviction of the residents in the neighborhoods of Las Martelas in Los Llanos and Marina Alta, Marina Baja, La Condesa and Cuesta Zapata in Tazacorte before the forecast of which the lava surrounds the mentioned mountain. This assumption, which had not been foreseen in the first models of the advances of the casting that until this week had been fulfilled almost exactly, would mainly affect dozens of banana plantations and the packing plant of the Cooperativa Volcán de San Juan.

The formation of the new volcanic languages located to the north of the original lavage has increased the area affected by the volcano. Morcuende reported that they amounted to 807.85 hectares early yesterday, 27.96 more than last Saturday; of which 245.88 belong to agricultural land (11.62 more). In this sense, 139 are banana trees (6 more), 52 vineyards (0.66 more) and 12 avocado trees (2.42 more), leaving the rest to other crops. As for real estate, according to the Cadastre, a total of 1,122 buildings have been completely destroyed, of which 902 are for residential use, 115 for agricultural use, 56 for industrial use, 25 for leisure and hospitality, 10 for public use and 13 of other uses.

The director of the National Geographic Institute (IGN) in the Canary Islands, María José Blanco, highlighted the improvement in air quality in the Aridane valley thanks, above all, to the gradual disappearance of the haze. Added to this is the arrival of the trade winds, which are pushing the ash column in a southwesterly direction. Given this scenario, Blanco did not rule out that small volcanic particles would reach El Hierro in the coming days. This change of the winds also allowed the La Palma airport It will operate yesterday with some normality and it is not expected that at least during the next few days there will be massive cancellations again. However, for the weekend even rains are expected on the north and east faces of the island. Likewise, this change in air conditions allowed the residents of El Paso not to have to carry out self-confinement during the day yesterday. that both on Monday and Tuesday they would be recommended to stay in their homes between 12 noon and 9 pm.

Regarding the data collected in the stations that measure the evolution of the volcano, these have not shown in the last days significant changes that point to a weakening of the eruption. What Blanco and Morcuende did emphasize was in seismicity, especially after the night The day before yesterday, an earthquake of magnitude 4.8 mbLg and 39 kilometers deep was detected in the municipality of Mazo, which was felt throughout La Palma and some towns in the north of Tenerife and La Gomera. This has been the largest earthquake recorded since September 11, when the eruptive process began with the swarm located to the south of the Island.

Faced with this increase in intensity, Pevolca does not rule out that earthquakes may occur in the next day that reach magnitude 6, which could lead to slight damage to the structure of the buildings. For this reason, a series of recommendations were made to the population, such as staying away from structures that could fall to the road if they are outside or protect themselves under the frame of a door or a solid piece of furniture if they are inside a building. . Likewise, it was requested that both in homes and in work centers preventive measures be taken such as reinforcing the shelves, fix the lamps and remove large objects from the furniture.