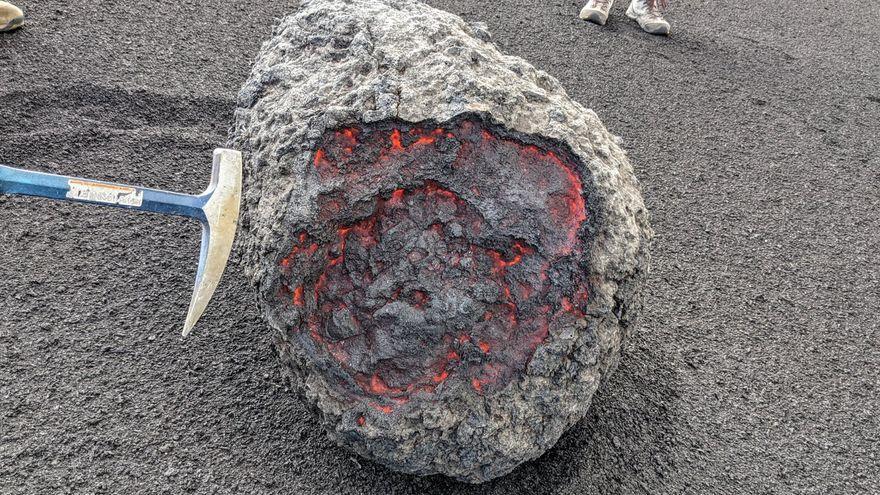 A large rock slides down the slope next to the volcanic cone between the picón at high speed, leaving behind a trail of gases and dust, as if it were a great snowball. When it finally manages to brake, it shows the incandescence of its interior, formed by a gold-colored lava at more than 500 degrees Celsius. These large rocks, known in the Canary Islands as volcanic eggs, can be both volcanic bombs and accretion balls and, pThat to its large size, it is a pyroclast more that, in the future, will configure the new landscape.

The reality is that the emission of these basaltic rocks is one of the most common in the volcanism of the Archipelago. In the Canary Islands, historical volcanoes have left some of these figures that are now part of the volcanic landscape. The example is on the trail «the eggs of Teide», a route near the Montaña Blanca road where you can see the gigantic pieces of solidified lava. The same landscape is repeated over himon the slopes of Montaña Rajada, in the Timanfaya National Park (Lanzarote) where these black lava balls remain intact since the day the volcano had the strength to expel them towards the surface.

Usually, a volcanic bomb is a globule of molten rock (pyroclasts) that is equal to or greater than 64 millimeters in diameter and can weigh between 2 and 4 tons. This is the explanation provided by the geologist of the University of Las Palmas de Gran Canaria (ULPGC), José Mangas, who points out that these large stones “are produced as a consequence of the fragmentation of magma” and are, in reality, accretion bombs. However, as in this case it has not been possible to carry out laboratory analyzes, the origin of these large igneous rocks could also be, according to the volcanologist of the Instituto Productos Naturales y Agrobiología (IPNA-CSIC), Vicente Soler, in the ancient stones that they are inside the volcano. From this perspective, what the volcano is pulling out could also be xenoliths detached from the walls that are found in the bowels of La Palma and that may have been part of the island for years. The volcano drags them outwards thanks to its power, just as it does when it has emitted white bombs with an appearance similar to that of the “restingolites” found in the underwater eruption of El Hierro, Tagoro.

Whatever their origin, what is clear is that, as they are very heavy – their volume is between 2 and 3 cubic meters – it is impossible for them to propel themselves great distances, unless the volcano acquires enough force to carry out such a feat. If not, “they end up descending the slope down the cone and circling on itself,” Mangas emphasizes. This movement causes the pyroclast to join the picon on the surface of the slope and round itself. Furthermore, as it descends that skirt of the volcanic cone, it “loses gases” and, with its movement, it throws up grit. “The image is reminiscent of the Coyote and Roadrunner cartoons,” says Soler.

These incandescent basalt rocks are not dangerous “if they run this way”, since “the volcano is not strong enough to launch them further.” In fact, that they can barely travel within meters of the cone is a sign that the volcano is losing steam. The real danger is found when “explosiveness and earthquake increases.” At that time, the volcano is capable of expelling these bombs more than 500 meters away. “When that happens, they usually tell us to leave the area,” says Soler. In fact, researchers have already witnessed the destruction caused by these large pyroclasts. In the first weeks of the eruption during one of its explosive phases, several of these bombs broke small walls more than 500 meters from the cone.