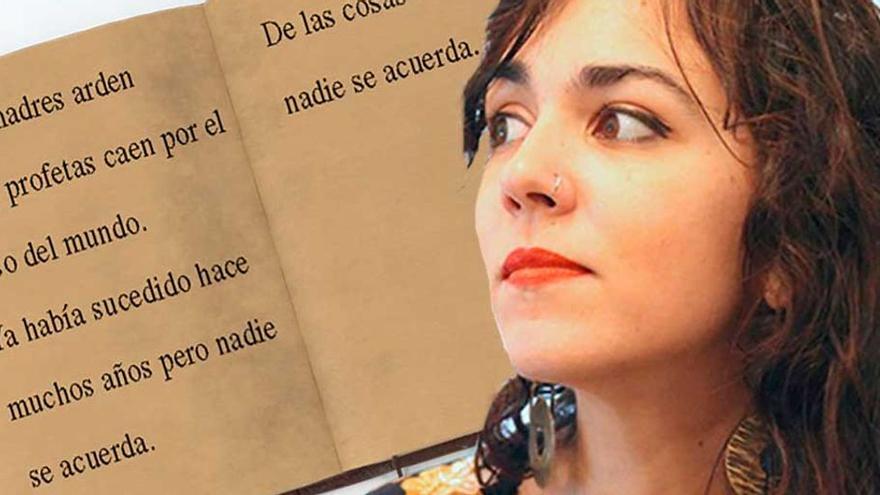 By the author, Alicia Louzao (Ferrol, 1987), he barely managed to sleep an hour since the award was communicated to him. “Knowing that people have read you and that they liked you fills you up to the tips of your fingers, reaches the roots of your hair. It is a feeling of being filled to infinity, which only happens when you write without expecting anything ”, affirms this doctor in Hispanic Philology and a degree in English Philology.

She assures that this recognition gives meaning to everything she has done since, at the age of 13, she decided to study the Bachelor of Humanities to fully dedicate herself to literature, a passion that has accompanied her since she was a child. “I come from a very reading family. My parents’ house has three rooms full of books and the house of my maternal grandparents, in Vilatuxe (Lalín), where I spent my holidays as a child, they were also great readers “, remember.

Today at my institute I recited my poem for the Jovellanos Contest Prize over the public address system.
Classes stopped and rang throughout the center.
It was so beautiful that I hope to dream it tonight.
In order to repeat it.#poetry #always

For her, poetry is like another part of her being. “It’s something you have with you, which you hardly realize,” says Louzao, who recalls that poetry is present everywhere. “We are constantly consuming it, although we are not aware of it. When we listen to a song by Rosalía or Don Omar, for example, ”he says.

From ‘The land of the unsuccessful’, the jury valued its “verses of biblical and hallucinatory breath with very shocking images and a highly original mix between dreamlike elements and a certain costumbrista prosaism” of this poem that, according to its author, speaks of the escape of talents.

She herself belongs to that land of failures, since had to leave his native Ferrol due to lack of opportunities, it states. He has been outside of Galicia since he was 23 years old and, since then, he has passed through London, Salamanca and now Madrid, where he has been for eight years. Yesterday, he read his poem over the public address system at the IB Cañada Real, in the Madrid municipality of Galapagar, where he has taught Literature for two years.

However, it is not the only reading of ‘The land of the failed’, whose verses also have some premonitory. “My friends tell me that I have something of meiga because I wrote it before the confinement, and it is true that now that I have reread it I have realized that it has a prophetic tone that makes it even more magical.” it states.

Louzao has published two books of poetry, ‘Manual for the understanding of insomnia’ and ‘The flying circus’, and is about to release the third, ‘The girls who did not want to go to school’. He also has a short, unpublished novel, ‘Destruction of the invisible city’. He also works on a collection of poems in Galician. “Although I usually write in Spanish, I have resumed writing in Galician. I would like this award to help someone to notice my work and to also be able to publish in Galician ”. says Louzao, winner of two editions of the Dictum Factum poetry contest in Vigo organized by the magazine of the same name and Ediciones Calpvrnia.

‘The land of the failed’ will be published in a book together with the other 30 finalists selected by the jury of the VIII Jovellanos Poetry Prize, endowed with 2,000 euros.

and the prophets fall from the weight of the world.

It had already happened many years ago but nobody remembers.

No one remembers sad things. We leave them hanging from the trees and sweep them with brooms and add bleach and cockroach poison.

Without knowing that those who do not speak will be the ones who conquer the world.

It had happened many years ago.

And every Thursday or Friday night.

In the land of failures, brothers are haughty and balding.

They love their women because it is the only thing they have. Although they are made of dark cardboard and have little to say.

Parents look for barrels with which to roll on the ground.

And the prophets fall from the weight of the world.

It had already happened many years ago but nobody remembers.

As an eagle knows how to look at a stone.

As an eagle knows that a stone does not feed him. But it doesn’t hurt either. Nor is he going to attack her. He will let her fly sad while looking for something that really moves.

Maybe that was our apocalypse.

I imagine this had already happened a long time ago. They blew it in my ear with a rustle of oily letters and kinky hair. I knew immediately. The lonely walks, the flowers on the road, the pain in the lips and in the teeth that bite the lips.

It had already happened many years ago.

The brothers in their toy closet being older and diabetic and stupid as a straw hat on a scarecrow in the sun. Mothers on fire. Parents in the barrels and flowers on the roads.

And the lonely walk in the land of the failures.

Where it always smells of the sea and fish and salt. Where the grandparents lean on the railings counting the fishing boats stuck in the water as a thought and a disease. The brothers growing inside the closets.

The land of the failed has a lot to say about the apocalypse and the History We Are Living Through. Because the lonely walks started years ago and the broken glass in the shops and the ones with nowhere to go.

This had already happened a long time ago. But nobody remembers that it is our daily bread.

The prophets fall with all the weight of the world.