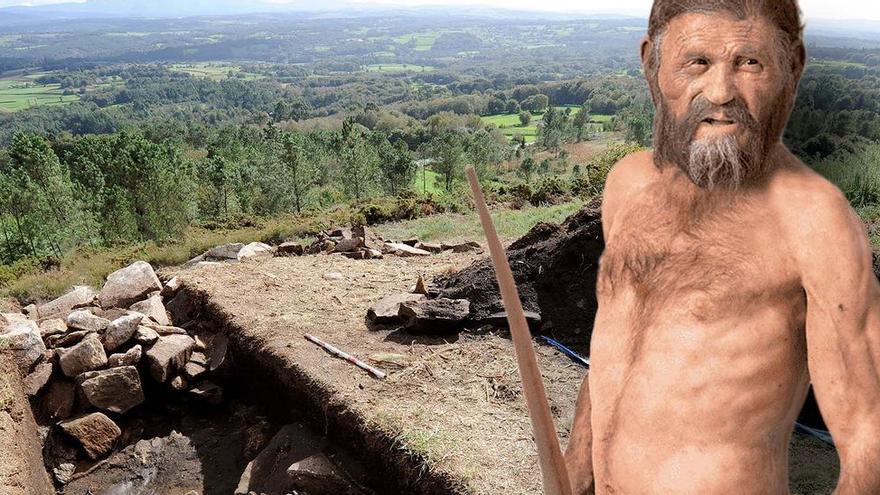 They are buried, covered with vegetation, located in inconspicuous places in the landscape and, although they have been in Galicia for more than three thousand years, their existence was not known until 2006 when A Roda de Barreiros was excavated in the Lugo Mariña y Thus, the first circular prehistoric site was discovered, which was called hang due to its proximity to similar structures in the British Isles, of which the best known is Stonehenge. Fifteen years after that discovery, experts have already identified 43 throughout the Galician territory, which opens the door to future excavations and field studies that allow us to unravel the many enigmas they pose and discover a hidden period of Galician prehistory, that of the end of the Bronze Age.

The archaeologist of the University of Santiago de Compostela Pilar Prieto and his colleague José Luis Cordeiro, both from the Ecopad research group, are carrying out a data collection work of which they will publish an article at the beginning of the year with the aim of defining as many deposits as possible, focusing their distribution in the territory and proposing a project to request the funding needed to excavate some of them and to be able to continue advancing in the investigation.

What do we know about those enigmatic circles?

The “HengesGalicians are circular structures – in some cases oval but with a very small difference between axes – delimited by a moat and sometimes by a small parapet whose outer diameter ranges between 32 and more than 74 meters, for which the researchers divide them into three blocks according to their size: small -between 32 and 41 meters-, medium -between 46 and 56- large – 60 to 74 meters, and very large -of more than 74 meters-, according to Pilar Prieto.

The interior of the enclosures that have been surveyed so far -A Roda, Ventosiños and Lavandeira in the Lugo Navy, Outeiro Grande in Lalín and Landra in Rianxo- indicate that they are not inhabited villages. “Without a doubt they are not forts, since they do not present remains of residential structures or attached structures”, affirms the archaeologist.

Other differences of these lithic circles with the residential settlements typical of the Iron Age, according to Pilar Prieto, are its smaller size and its location, since while the forts were preferably located in high places to improve their defense, this type of deposits “tend to be located in prominent areas, but not in the highest areas of the mountains but in medium heights, adapting to the terrain on slopes and looking for more or less flat areas near rivers and the coast ”.

The discovery of graves with ceramic remains corresponding to vessels from which analyzes were made opens the hypothesis that these constructions fulfilled a ritual function related to death or that they were directly necropolis. “Skeletons are not preserved, so they could have been cremated bodies, but we cannot assure this because the Galician soil is so acidic that it does not allow the conservation of organic human remains,” explains Pilar Prieto. The thesis that they are cemeteries gains strength from the analysis of land carried out in the Ventosiños deposit by the Ecopac team led by the professor Martinez Cortizo. The results gave a very high phosphorus content, with which the researchers concluded that it could be related to decomposing human remains.

Invisible in the landscape

A curious fact that scholars point out is that they are invisible in the landscape, that is, “if you stand in them to see the surroundings, you cannot see the nearby river, you can only see short and immediate distances, but not the medium or long distances, except in those located on the coast facing the sea ​​”, he comments. Contrary to what happens with the forts, which can be seen from afar in the landscape, the “henges”Galicians are placed in such a way that it is not perceived where they may be. “They are deposits that you only realize exist when you are on top of them, if there is no vegetation, of course; It seems that they were looking for a location to be hidden, something that would not happen if they were built a few meters higher ”.

How have they been found?

When José Luis Cordeiro and Pilar Prieto began their investigations in 2016, only a dozen sites of this type were known to exist, most of them in the Mariña of Lugo, which came to light due to archaeological surveys prior to construction works or because they were near other interesting excavations, at first, and by patient searching for experts, later. The first discovery of a “hang”In Galicia, that of A Roda de Barreiro in 2006, occurred when carrying out the relevant excavation of a deposit that was going to be affected by the route of the Cantabrian highway, which was finally diverted. After a first excavation of which Andres Bonilla, director of the excavation, made a report that was never published, in 2015 a second campaign was carried out, a Carbon 14 dating was requested and the vestige was dated around 1,500-1,600 years BC.

The discovery of the “hang”By Ventosiños, excavated in 2011 and 2013, added interest among archaeologists to these enigmatic hengiform circles whose existence outside the British Isles is currently only known in Galicia. Later, others such as that of As Lavandeiras, in Xove, and, more recently, that of Outeiro Grande in Lalín were surveyed.

Finding them is “a matter of patience and begin to search in areas. First, a search was started in the surroundings of the castros and known necropolises and some have been located with a survey financed by the Xunta in 2019 to review the cataloging of known sites and try to discover new ones, ”says Pilar Rubio. The pandemic did much to advance progress in this area as experts had time to track the ground..

In the new findings, the use of visualization tools such as LiDAR has played a fundamental role, which allows finding deposits that are difficult to appreciate in another way. This technology consists of a laser that is launched from a platform via land or air and emits a signal that allows the construction of a MDT model of land restructuring, so that the relief is seen in detail and it is possible to find non-visible deposits in the territory, as Pilar Prieto explains. “This type of reservoirs that stand out in the ground forming an almost perfect circle are very well appreciated with LiDAR, says Prieto.

Many of them have been located in the field through a tool that emits laser signals via land or air.

Thanks to tracking with this tool, José Luis Cordeiro he located almost by chance the “hang”From Monte Buxel, located in the municipality of Redondela and lying on the Ría de Vigo, near a Bronze Age site. Other scholars like Manuel Miranda, of Marine Heritage, o Manuel Gago, who works with a team that studies Roman camps, They use this same technique to track Galician territory and locate new “invisible circles”.

Relationship with the British?

One of the hypotheses that opens this archaeological discovery is the possible communication of the British and Galician peoples in Prehistory. In this regard, Pilar Rubio clarifies that those surveyed for now in Galicia are later than the Anglo-Saxons, which also have the characteristic of having two entrances. “In the first one that was excavated in Galicia, only one access was detected, although through LiDAR we sometimes see interruptions in some circles that can be interpreted as entrances, something that we will not know until we excavate.”

The boom in genetic analysis in ancient skeletons that allows us to demonstrate the connection between prehistoric peoples is not possible in the case of Galicia due to the lack of organic remains of human beings. “Through material elements such as ceramics we can say that it is similar to the one existing at that time throughout Europe, so it can be linked to a phenomenon of burial in a pit with a very small or sometimes non-existent amount of trousseau. At that time, cremation also begins to develop as a burial rite, although we have not found ashes either. It could be a generalized rite throughout Europe until 1500 BC, precisely when it seems that it is beginning to develop in Galicia, but we do not know if the link is with the British Isles or not ”, Prieto maintains.

In fact, in the United Kingdom and Ireland, where 358 sites of this type have been identified, the concept of henge is being revised, since any type of circular enclosure was classified as such. And probably in Galicia some constructions that have been cataloged as forts are not..

Be that as it may, the discovery of this type of sites in Galicia is exciting for archeology, which finds in them a way to study a period of prehistory very unknown in this region and of which until now there were few settlements.