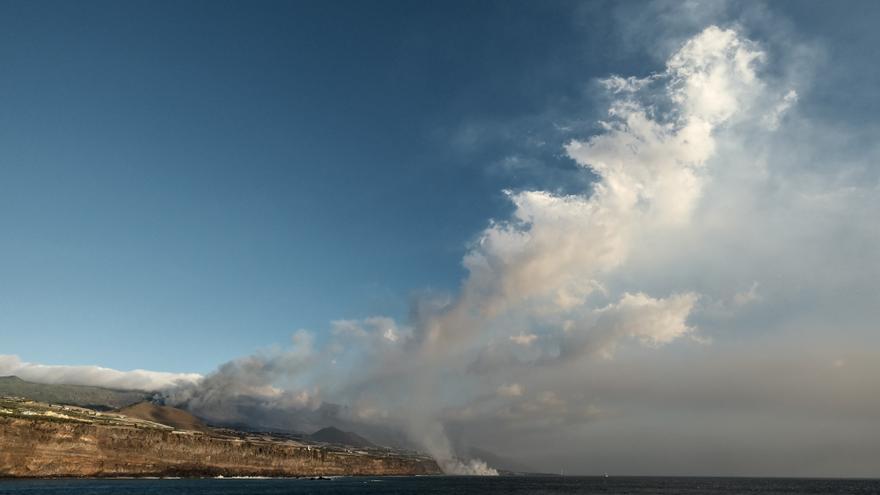 The lava expelled by the Tajogaite volcano The size of La Palma has increased by around 10 hectares after coming into contact with the sea, specifically, the area occupied by 10 soccer fields. That, without a doubt, was one of the most outstanding informative references of the day after the laundry arrived at Perdido beach (Tazacorte). Another positive aspect had to do with the gusts of wind that helped keep the column of water vapor and toxic gases generated after the volcanic material came into contact with the sea away from the coast. The third incidence, the most negative, was the disappearance under the magmatic avalanche of the Pampillo neighborhood. On these three vertices pivoted the minute by minute of a catastrophe that continues to unleash many calamities.

The magma destroyed a hundred buildings last Tuesday in the final stretch of its vertiginous descent in search of the sea. Pampillo, a small neighborhood that Los Llanos de Aridane and Tazacorte share, was buried by some lava flows that in some points exceeded 30 meters in height, but just above this geographical enclave another hundred houses disappeared and there are countless semi-destroyed properties .

The strong gusts of wind that affected the southwest side of Isla Bonita yesterday prevented the drones from flying so that they could film the scene of desolation. Of course, his action managed to keep the toxic cloud formed near the coast of Tazacorte away from the confinement perimeter. The avalanche of volcanic material that broke through in the last kilometer and a half before plunging into the ocean from a cliff, after destroying the Todoque neighborhood, between the paths of Pasteleros, Aniceto, El Calvario, Pampillo and, finally, the beach del Perdido, which was the point where fire and saltpeter came into contact at 11:00 pm on Tuesday, left a deep scar in a neighborhood that has organized its history with a powerful family tissue. “It was a horror, a bitter morning,” says Juan Miguel Rodríguez (Nueva Canarias), mayor of Tazacorte, without forgetting the enormous speed with which the magma was descending. “Such a situation is difficult to reproduce, even in the most catastrophic film,” remarks the first mayor of a municipality that yesterday completed the third day of confinement for the 300 residents of San Borondón, Marina Alta, Marina Baja and La Condesa.

These four points are located at more than two kilometers from the mouth of the magma and chance has given them a better destiny than in the case of Pampillo. “All that was lost,” says the nationalist in relation to the thirty buildings that were on the municipal boundaries of Tazacorte. The other three-quarters were under the administrative management of the Los Llanos de Aridane City Council. “It is a neighborhood in which grandparents, parents and children grew up.” That was the Pampillo bagañete.

Noelía García (PP), mayor of Los Llanos de Aridane, he did not dare to give a closed figure because he did not have the aerial references, but his tone of voice conveyed sadness for the material damage that piled up between the Todoque neighborhood and Perdido beach (Tazacorte). “Right now I can’t give a figure, but there are several hundred houses under the lava.” This data fits with information provided by the satellites of the European Copernico program that indicates that the volcanic crisis has swept away some 700 homes and more than 1,200 rustic farms, devoured 267 hectares of land and blew up more than 21 kilometers of roads: the losses, according to a study endorsed by Idealista, far exceed 206 million.

As soon as the first flows of the Tajogaite overcame the voluminous obstacle of the Mountain of Tres Picos, below, in Los Guirres, they were aware of what was coming to them. Juan Miguel Rodríguez says that There are no words to define the “devilish speed” that the river of lava took minutes before rushing into the sea from a height of one hundred meters. The first mayor also remembers that the volcano no longer sounded like the engines of an airplane, now the noise was similar to that of a sea in the background. “It was like that crack you hear on rough seas days,” he remembers.

Taking into account that from the interior of the volcanic structure created in Montaña Rajada (Tajogaite), between 20,000 and 25,000 tons of magmatic material were expelled on a daily average – except for much of the day last Monday, which did not exceed 600, coinciding with the activity stop – and the pyramid of more than 50 meters high that was created in a few minutes as a result of the sedimentation of lava on the seabed, it is not surprising that a large platform (a kind of low island) was created that yesterday afternoon offered a devastating fact: the tongue of fire has gained about 10 hectares of land from the sea.

The widening that was seen yesterday at various points of the pouring –with a growth of over 500 meters long and around 100 meters high–, coupled with the high speed reached by the tongues of fire in the final stretch of their entry at sea they have accelerated that in less than 24 hours they have already gained those one hundred thousand square meters from the coast of Tazacorte, the equivalent of ten football fields.

The specialists of the National Geographic Institute (IGN) detected thirteen earthquakes between 12:01 am and 7:29 pm yesterday in the areas of Fuencaliente (9) and Villa de Mazo (4). The movement of maximum intensity, traced on different occasions throughout the day yesterday, stood at 3.3 (mbl.g).

The technicians who are monitoring the movements of the Tajogaite volcano They believe that “there will be new episodes of increased and decreased activity” such as the one that occurred on Monday morning before the leak that is located below the cone began to emit a huge amount of more fluid lava and yellowish tones – with an appearance similar, but not the same, as that of the Hawaiian eruptions – which accelerated the arrival of the lava flows to the beach of P perdido (Tazacorte). They also influenced the fact that magma currently has an escape valve and, therefore, does not have to find a new way to rise to the surface. Precisely, two of the «fingers» that have been expelled by the Tajogaite volcano are still stopped in Toquedo, both split when they found a barrier on the north slope and stopped less than a hundred meters from the Los Angeles Cemetery (Los Llanos de Aridane) and the only incinerator that exists on La Palma.

Noelía García, mayor of Los Llanos de Aridane, has been observing for days how these two mounds have become a “threat” in the area. The emotional drain on the neighbors who continue to be evicted is enormous and most of them always ask the same question. “Is my house still standing?” She confesses that her mental reserves have been on the verge of being exhausted, but every time the “red light” is lit, demanding energy from her to keep going, the popular woman finds a reason to push forward. “This is the worst thing that can happen to a mayor, seeing how your neighbors ask you for something that you cannot give them,” he confesses at a time in the conversation in which silence dominates everything. «The fact of creating false expectations is terrible because in these centers we are all family and nobody is saved when there are losses; We have all lost something that we are not going to recover due to many reconstruction projects that we invent. The moral damage is terrible and that is not going to be cured with the roof that we will give to those who now have nothing, “says before holding a memory for his mother (85 years), who lived through the tragedy of the San Juan volcano ( 1949) and was evicted for three months in the middle of the war. «She felt the same solidarity that we palmeros these days perceive, no one is turning their back on us … In El Pampillo the essence of the Canarian families was lost, who know that in hard times they have to lend their shoulders. That is no longer here, but not in many homes in the Todoque neighborhood “.

And it is that the mayors of the municipalities of La Palma most “punished” in the last 48 hours by the fury of the Tajogaite volcano say that “There are no hands to deal with so many problems.” Rodríguez only has three municipal police officers in Tazacorte, but three places have been summoned. García offers words of “gratitude” for the young people.

“All those who say that they only live attached to a mobile phone should see the signs of solidarity that they have been giving us since dawn,” he emphasizes, wanting to find in these supports the same balm that more than fifty psychologists are offering to people who have been “eaten” in less than two weeks by an unimaginable catastrophe. “As much as they told us in the meetings prior to the eruption, this seems like the script for the worst horror story they have ever told us,” he concludes, not without noticing that in the last week and a half people have spoken more with their eyes than with the mouth.