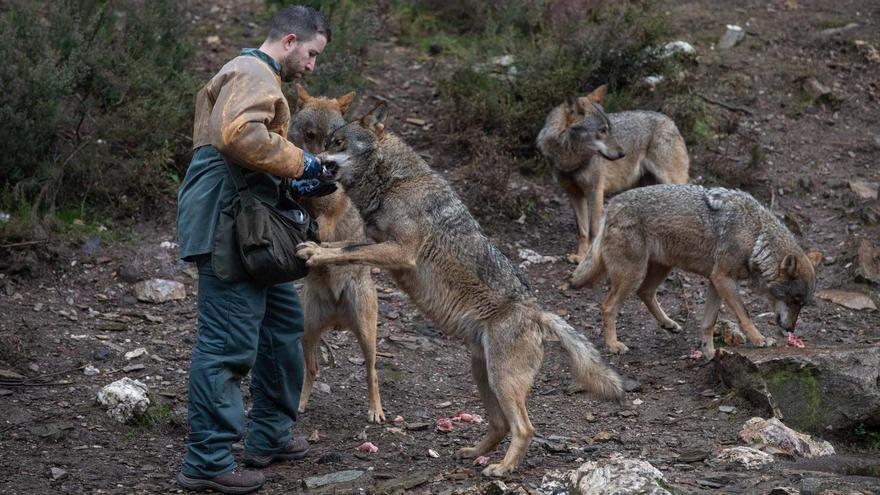 The coexistence between the wolf and extensive livestock has been a concern for millennia in all cultures that share space with the predator. The debate has been revived with the recent decision to grant special protection to the canid and that this is no longer considered a hunting species throughout Spain, a change proposed by the State Commission for Natural Heritage and Biodiversity after a close vote that went ahead with the support of autonomous communities such as the Canary Islands, the Balearic Islands, Catalonia, Extremadura or Melilla, where there is not a single specimen of the canid.

Paradoxically, the area of ​​the Iberian peninsula with the highest density of Iberian wolves is a hunting reserve, the Sierra de la Culebra, where each year the seals are auctioned to hunt a few specimens of the species. The hunting practice has not decimated the populations of this carnivore, which in the last two decades has consolidated its presence in the territory and has spread, also colonizing the south of the Duero valley, where there were no wolves in the 20th century, arriving in the present to the Community of Madrid. Experts estimate that in the whole of the province of Zamora there are about 40 herds, totaling about 360 specimens, approximately 14% of all those in Spain..

Precisely in the heart of that Sierra de la Culebra an educational center is located to explain to the public what a wolf is, how the herds live and behave, the role of this animal in the Iberian ecosystem and its relationship with human populations with the that shares territory. An informative work to show the world the balanced management of the wolf that is carried out in the area of ​​the peninsula with more specimens of the canid with the aim of conserving both the survival of the species and that of extensive livestock. In addition, the center has become a catalyst for the tourism sector in the Sanabria region.

The Iberian Wolf Center of Castilla y León ‘Félix Rodríguez de la Fuente’ is located in the municipality of Robledo, in the municipality of Puebla de Sanabria, and in 2019 it received more than 42,000 visits, helping to sustain the tourist activity more beyond the summer season. It is currently closed to the public due to the pandemic, but it receives daily inquiries from people interested in attending when it reopens. Since its inauguration in October 2015, and before, “wolf” tourism has coexisted with the hunting use of the species in the Sierra de la Culebra reserve.

The key to the success of the Iberian Wolf Center is that it is the best place in Europe to see wolves in semi-freedom conditions. It is not a zoo, the center has 21 hectares of their natural habitat, more than enough space for the 14 wolves that, despite being born in captivity, maintain the same social relationships among them as in freedom, a pack behavior, with a hierarchy, and do not suffer from stress from feeling locked in.

The four observatories integrated into the landscape of the Culebra allow you to contemplate the herds from a few meters away during the guided tours. After five years of receiving visitors, these wolves are no longer frightened by the murmur of tour groups, although some of the young individuals may appear somewhat suspicious, just like their mothers.

In the Sierra de la Culebra there are several companies that offer guided excursions to the mountain to try to spot wolves in freedom. Many of its clients take advantage of the trip to also pass through Robledo to observe these other wolves in the center. “It shows that they are two different and complementary experiences”, in the words of Jesus Palacios, director of the Centro del Lobo. The first is gratifying because of how difficult it is to find the animal by chance, even if it is hundreds of meters away, the second because the proximity allows observing the beauty of the canid in all its splendor..

Currently there are 14 specimens of “Canis lupus signatus” living in the Iberian Wolf Center divided into three herds. But for them the family actually has 18 members. The animals consider the four members of the management team of the center part of their hierarchy, thanks to the work that they have been developing every day for almost a decade, when some of these wolves had not yet been born, since the team’s socialization work with animals began in 2012 at the Bird Recovery Center of the Junta de Castilla y León in Villaralbo.

Now they await the daily visit of these two-legged wolves – two men and two women – they come to their “human howls” and eat from their hand. The meat is used not only to keep the animals fed, but also as an element of socialization to establish a bond of trust between the wolf and its keeper, to evaluate the dynamics within the herd at mealtime that establish social hierarchies between wolves, and most important of all: so that through that physical proximity between the handling team and the canids, the keepers can observe any changes in the body or in the behavior of the animals that should concern them. All the work of the management team is geared towards safeguarding the health and well-being of the wolves.

The four of them are the only people who have physical contact with the wolves. One of the caregivers is also the center’s veterinarian, which greatly facilitates the work in case of having to examine a wound, since mutual trust often allows the canid to do so without sleeping.

The visitors’ favorite herd is the largest, the one made up of the young Llagu (male), their sisters Mancha, Sanabria and Tera (females), born in 2019 in the Center itself, and their aunts Clarita and Dakota, who are nearby nine year old. The seventh member of the pack is Robledo, a male, son of Dakota, who was born in 2016 with a congenital dysplasia from which he survived thanks to a surgical intervention. After the operation, he needed intensive care for about a month, was quite weak and needed medication every few hours. More than one night, the cub went to the homes of the management team members and slept with them. But Robledo showed immense life force and managed to get ahead, he is now the normal size of an adult male, but limps on one hind leg. That month of his childhood, almost always attached to a human, makes him the most sociable member of the center.

Esther and Tomás are two of the four members of the management team. Upon sensing his arrival, the seven wolves of this pack come down the slope lightly, running and playing among themselves, especially the four younger brothers. At this time of winter it is the “precelo” of the wolves, and they are more eager to move, but also more hungry. They wait patiently for the pieces of meat that they know the keepers hide in their fanny packs. Llagu marks his position as alpha approaching to be the first to receive his ration, but there is enough meat for everyone. When they have satiated, calmer, the wolves disperse to hide a good piece of leftover meat, out of the sight of their companions and the curious journalists who observe them from the viewpoint.

With 42,000 visits per year, the center maintains tourist activity during winter

Now it is the turn of a herd of red kites that take advantage of the smallest pieces that the wolves have despised. Another incentive for the visitor to see this bird of prey feeding, which in the winter months is usually concentrated in the northwest of the Iberian Peninsula. In summer the black kites take their place. A crow also makes an appearance, pecking at the remains that the canids did not want.

From the new observatory built in 2020, you can see Sauron, Jara and their three children: Niebla, Luna and Félix, who were born on May 14, 2020, have just turned nine months old, but already exceed the size of their mother. The delivery was recorded on video thanks to a camera with night vision camouflaged inside the wolfhouse, an invaluable document, due to the good quality of the images, which visitors can see in the museum, before meeting “live” with the three babies. From the first contractions of Jara, until the moment in which the mother cuts the placenta and breaks the umbilical cord with her teeth.

This wolf is the only one who has not been born in captivity. Someone left Jara anonymously in a drawer of the Villaralbo Bird Recovery Center in 2013, when she was still a baby, with a note in which the “donor” explained that he had found her in the field and took her to his house believing, by mistake, that it was a dog. Having lost the fear of man and not having socialized with adult wolves, the animal could not survive in freedom, so its salvation was the center of Robledo.

The interpretation center is located in the middle of an idyllic forest of the snake, built in the style of the typical architecture of Sanabria and imitates the shape of the “Cortello dos lobos” of Lubián or the “Curro” of Barjacoba. A way of integrating construction into the landscape, devised by Leocadio Peláez.

An experience that attracts more visitors every year, and that has become an economic booster for Sanabria, helping to “de-seasonalize a tourism sector that lived mainly from the Lake and the summer months”, as highlighted by María José Rodríguez, head of the Castilla y León Natural Heritage Foundation. As soon as Covid-19 allows the center to reopen, without a doubt, Oscura, Atila, Clarita, Dakota, Robledo, Llagu, Sanabria, Tera, Mancha, Jara, Sauron, Félix, Luna and Niebla will once again attract the cameras and flashes of the public .

The members of the Veterinary Management and Control Unit are perfectly integrated into the social structure of the herds in the center, as shown by the images in which the canids approach and eat from their hand.