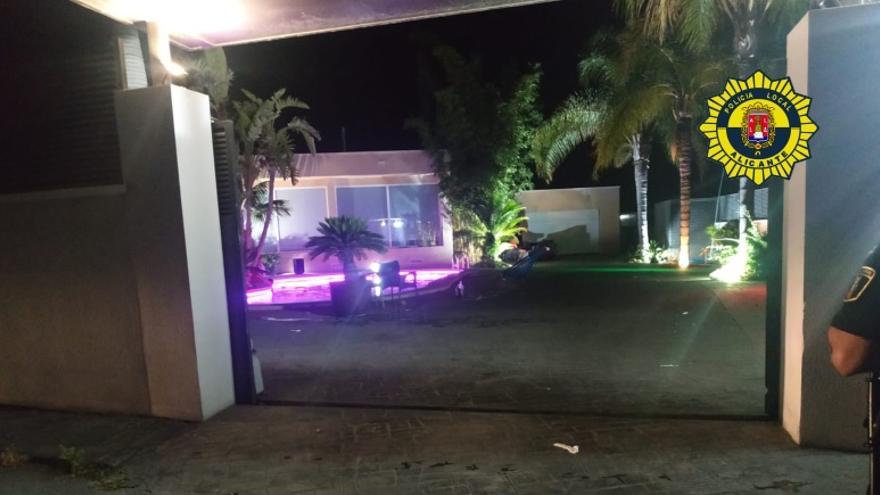 The Alicante Local Police dissolved early Sunday a illegal party which was being held in a private chalet, at the departure of The Fenollar Gorge. Inside the house were more than a hundred people who had bought a ticket to attend the illegal celebration. None of them met the anticovid measures: they were dancing, smoking, without masks or safety distances. The hundred attendees, who came from Elche, Valencia, Murcia, Santander, Totana, Agost, Alcantarilla, were identified and sanctioned by the agents.

According to police sources, the organizer was denounced with a very serious offense for holding a private party that involves an agglomeration and grouping of people who prevented the adoption of anticovid prevention health measures. The penalties you face can go up to 600.000 euros, as well as by the Noise Ordinance, violation of Law 14/2010 on public entertainment and recreational activities, and by having installed security surveillance cameras oriented to the public thoroughfare.

The operation was organized after 12:15 a.m., when the Security Forces and Corps were made aware of this party by social media and after receiving and neighborhood complaints in which loud music was alerted and the possible existence of an illegal party. Then they launched a device in which a score of Local Police officers participated with five patrols and the Goir and seven municipal cranes, as well as two teams from the National Police Corps and one from the Autonomous Police, to intervene and dismantle it.

This is how they promoted the illegal party on social networks

The Local police upon arrival he found that they had loud music and a party was in progress. From the door a person was observed who received people and allowed them to access the interior through a control. Inside, there were a multitude of attendees in a garden area with a swimming pool who wore plastic wristbands to control access, dancing, smoking, without wearing masks or keeping their distance, Failing to comply with the anticovid safety and health measures, generating noise and annoying the neighbors, according to municipal sources.

The police agents requested the presence of the organizer, who alleged that he was a birthday. The Police, after the pertinent investigations, verified that I was charging a ticket established an access control with wristbands, and it was a public party on social networks, without adopting any preventive health measures. For this reason, the Police began the identifications and carried out the eviction of this clandestine party, of people who were inside, all of legal age.

Also, during the identification process at the main gate, several people tried to escape by jumping over the wall that delimited the plot, hiding in the undergrowth. The Police began to remove vehicles that were badly parked with cranes and to carry out breathalyzer controls, and while the operation lasted, people who came to the illegal party continued to arrive, the device ended after 3.30 hours.

171 sanctions on the weekend in Alicante

The Department of Security of the Alicante City Council has reported this Monday that the Local Police imposed this weekend a total of 171 penalties in the extensive operation organized to guarantee anticovid measures and avoid contagions. The establishment’s device developed normally, and the crash plan in Postiguet It worked very effectively, the local police officers established access and alcohol control in the sand, with a wide deployment without bottles being made, and it was possible to prevent infections and crowds throughout the weekend.

The Councilor for Security, José Ramón González, has congratulated the Police for “the excellent operation throughout the preventive weekend to ensure compliance with the measures and new infections, and the good behavior of citizens”, and has again asked “responsibility and awareness because the The pandemic is still among us, we must keep our distances and comply with the rules for the good and health of all, and avoid organizing parties ”.

The agents within the surveillance and citizen awareness of the measures were sanctioned 11 for smoking without keeping their distances, raising 8 reports of complaint for not making use of the protection in order to avoid contagions, as well as 5 for drug use, 6 for urinating on public roads, and 8 for the Citizen Security Law for refusal to identify oneself or disobedience and lack of respect for authority.

In this sense, the City Council and the Police once again reinforced the control of leisure areas with a special device, informing of the new measures and closing times, as well as the monitoring of capacity in the city on weekends to avoid crowds in areas with more influx of people, denouncing 5 establishments for selling alcohol after 8 pm, and two for having the dance floor enabled.

Arrest for an alleged crime of assault on authority

Alicante Local Police Agents, assigned to the Night Service, they detained a male, about 01:30 a.m. on Saturday, for his alleged involvement in a crime of disobedience and attack on local police officers.

The arrest took place on Cervantes street, when a local police patrol received the request of two young men, minors, who said they had been searched by an individual who was not wearing a uniform and who claimed to be an agent. The Police set up a device locating said man, in order to clarify what happened and to prove his status as a Policeman through his professional badge.

Likewise, this person did not collaborate with the agents, and attacked them, for which reason they were arrested, and it was also verified that they were not a police officer. The detainee, a 22-year-old young man, has been admitted to the police station, for later placement.