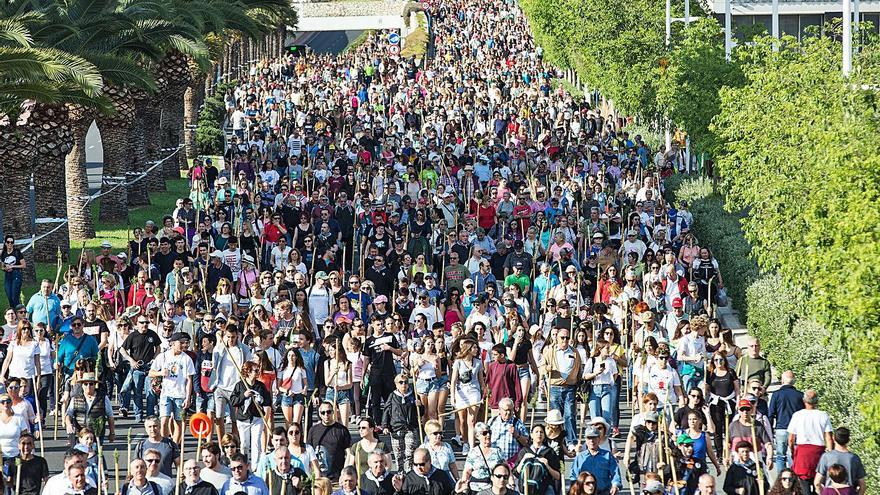 The City Council and the Cabildo agreed yesterday to suspend the pilgrimage for all purposes and celebrate only one mass without an audience. Access to the farmhouse will be restricted and security measures will be reinforced to prevent groups of people from gathering both in the Luis Braille square, outside the temple, and in the dressing room. In this way, a perimeter of closure and control of access to the monastery will be established and controls will be extended to the traditional route from Alicante. This was agreed yesterday in the meeting held by the mayor, Luis Barcala; the deputy mayor, Mari Carmen Sánchez, and the councilors of Fiestas, Manuel Jiménez, and of Security, José Ramón González, representing the City Council; with the dean of the Cathedral of San Nicolás, Ramón Egío, and the rector of the sanctuary of Santa Faz, José Luis Casanova, for the Church.

At the meeting, it was agreed to hold a mass first thing in the morning in the temple and behind closed doors, which will be broadcast via streaming. In addition, an extraordinary departure from the Relic is being considered to bless the city against the pandemic at an hour and in an unknown place that will not be previously known, as was tried last year from the Castle of Santa Bárbara, although finally the Government Sub-delegation did not allow it for security reasons. In the place where this blessing is made, if it is authorized, the accesses will be cut off. The City Council will also prevent the installation of stalls on the day of Santa Faz on land within its municipal area as there is a part that is shared with Sant Joan. The bipartisan asks the people of Alicante not to go to the monastery and remember that the Relic is in the temple 365 days a year, so you can go to visit it at any time. Likewise, it is warned that groups of people detected will be fined.

Above, representatives of the City Council and the council, yesterday.

The City Council leaves under study if a lane is cut or an area on the road where the pilgrimage usually runs (avenida de Dénia and N-332) is restricted since, apart from individual responsibility, there is no restriction on the part of the Generalitat (they expire on April 12, three days before the date of the Pilgrimage) that prevents a citizen from walking to the village or to the authorized number of cohabitants. But groups of people are forbidden, hence the local authorities insist that the route will be subject to controls as well as the access to the monastery, apart from the fact that those who move may find that the Relic is not in the dressing room if it bears fruit. the extraordinary outing to bless the city, as long as there is no fourth wave of covid. This act would also be restricted and could only be followed through live broadcasting, as will happen with the mass.

The mayor, Luis Barcala, stressed yesterday the need for “this year, more than ever, the people of Alicante stay home and not go to the monastery. We are going to try, if the health situation allows it, that the Holy Face comes to Alicante to bless us all, “he said in reference to the possible extraordinary departure of the Relic. The deputy mayor, Mari Carmen Sánchez, called for prudence, recalling that “although we cannot visit her on her holiday, the Holy Face is there all year round. You can go at any other time of the year to fulfill the promises made.

The rector of the sanctuary, José Luis Casanova, said that the main thing is to take all the security measures that are within reach to avoid contagion, while ensuring that the Holy Face can be venerated, always bearing in mind that the Pilgrim is suspended . Therefore, remember that the Holy Face awaits pilgrims who want to visit it at this time of a pandemic or because they have been sick and that it is best to stagger the visits so that there are no unwanted crowds. “You can come now to meet this face of hope, take advantage of Holy Week and the 15 days around Santa Faz, in which it can be said that it will be the longest Pilgrimage in history,” said the priest, concerned about the fourth wave of coronavirus that already affects Italy and France.