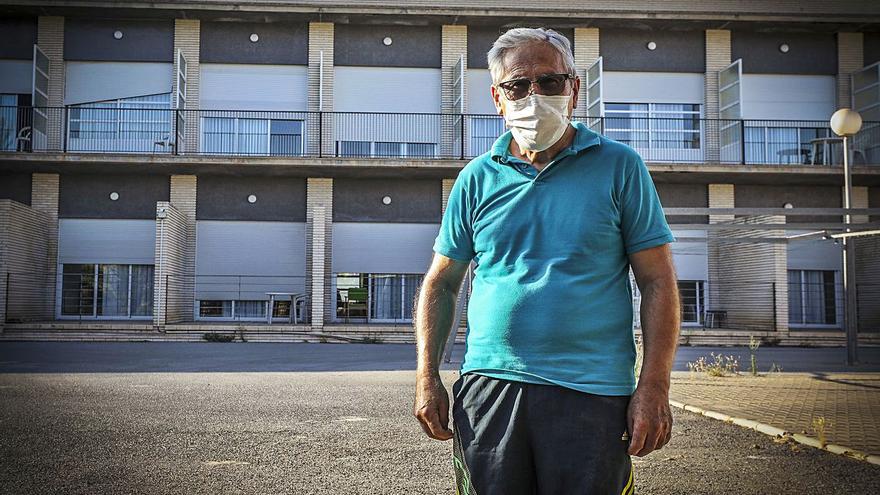 This 73-year-old from Elche, of La Mancha origin, is one of the nearly one hundred users of the Altabix nursing home, a privately run public center that brings residents and family members to their head due to the multitude of deficiencies that it entails in its maintenance. She has been without seeing her grandchildren for more than a year for fear that they would catch it. Even when the state of alarm was decreed, his children proposed that he go home with them and he refused to protect them, so he has lived the drama of infections from within. In the same way, he feels that he does not want to be a burden on his environment, “because I have an experience of my parents being sick for almost 20 years and I know what that is, I have it recorded.” Until now they can only come from abroad with concerted and controlled visits.

The center’s deficiencies were suffered in the midst of a pandemic when he was infected with coronavirus and had to be isolated from the rest of the residents. He says that the virus did not affect him but he spent about ten days in a room in the other wing of his usual room without television or internet, with the blind broken and lowered through which the air leaked and without heating, as he recalls.

He explains that what has annoyed him the most have been the room changes “because, for example, they don’t wear your right clothes, they have been very bad times,” he explains. These months he has also lost several colleagues due to the virus inside the facilities. Relatives of residents point out that a score of inmates may have died from the coronavirus during the pandemic, although the center has never provided the data.

During the health crisis, he has sent several claims to the Ministry to address certain problems with heating or air conditioning. Precisely what most regrets of all is the decline that the building has suffered over the years and how limited the staff is today. He narrates that when he entered with his wife a decade ago, he did so voluntarily because they believed it was the best way to spend his old age, taking into account that his wife, who died two years ago, suffered from Alzheimer’s in an advanced stage and was from the best options to take care of her.

Those times were complex and painful for Francisco because his wife had a crisis and there was reluctance to treat her at first, he says. However, remember that at that time there were many couples who chose to spend their last years in this type of residential center and therefore it was a comfortable place to live, they felt accompanied with each other, and even formed a kind of gang. They had their little parties and played board games.

This septuagenarian says that now the situation is critical because the majority of users are dependent and cannot find anyone to form a group for things as simple as having a coffee. «At an advanced age everything is mania, ailments. There are those who have entered through Social Services or family, while when I entered there were about eight or ten couples who entered voluntarily. He points out that of those old friends, only two women remain in the center, who are already very old and have lost communication skills.

In the same way, he perceives that care assistance falls short precisely because he understands that the staff has not been reinforced. “There have been years when it was chaotic because residents entered bedridden and need more health care, because if they have the same staff it is complicated.” He points out that “a long time” has gone without a doctor in the center and they have had to resort to the health center “and that takes time.”

At the same time, he defends that there are “very nice assistants and nurses, but they don’t have material time to stop and talk and they are always running”, so in a certain way he feels alone.

His distraction is going out to the garden to sunbathe or walk in nature, since he usually takes routes through natural environments such as the Pantano to distract himself. When he arrives at his room, shared with another user because the rooms were designed doubles, he spends the time watching television, reading or writing parodies and football chronicles to feel closer to the fans he shares with one of his three children.

This week he was returning from his first trip in years to his homeland, to connect with his origins. He explains to INFORMATION that his wish is for the residence to shine again because the building is large and well located. “And I want to have a health of iron and youth, of which I still have something.”

Also Read  The tourism sector cries out against the curfew: "They have sunk the summer"