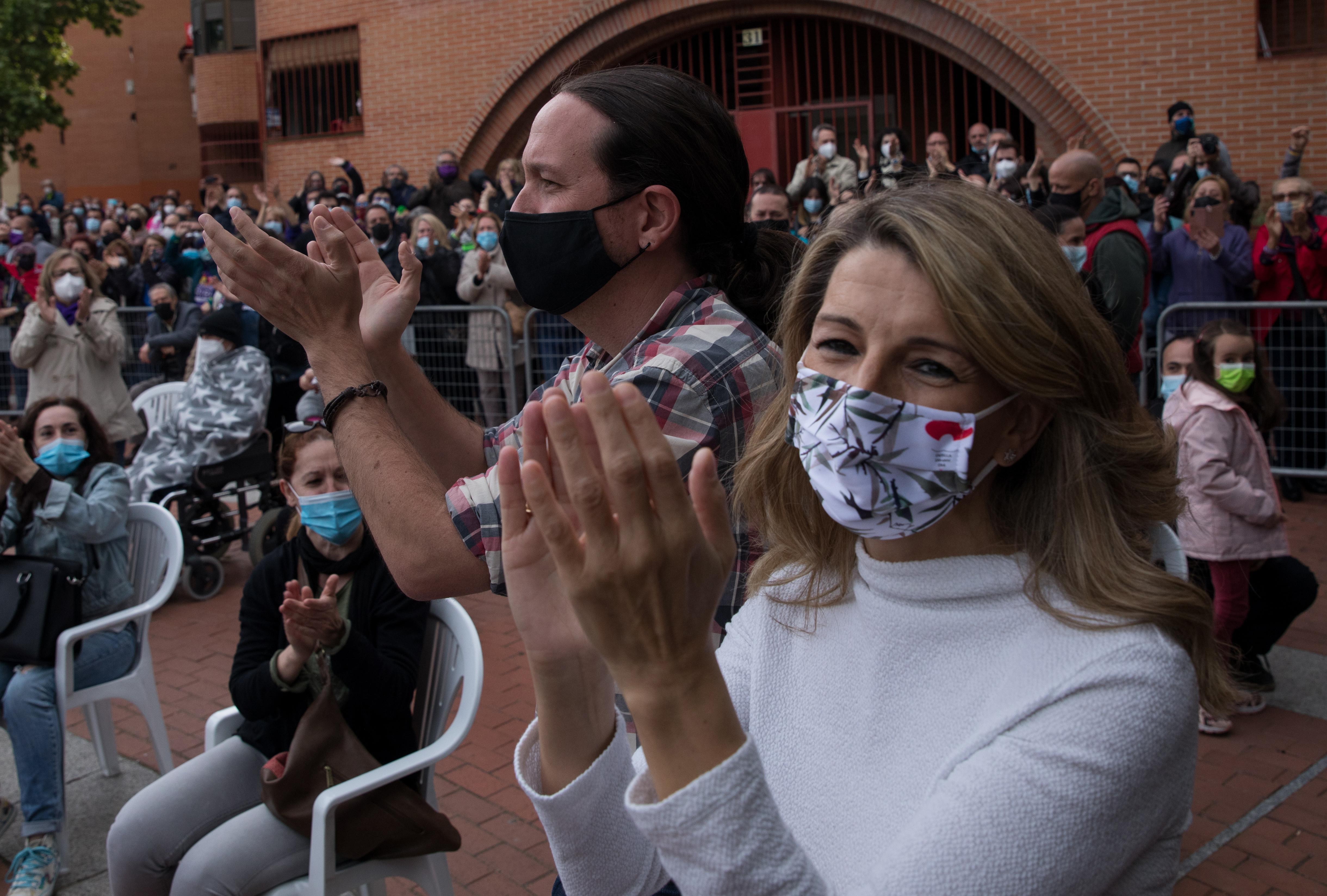 He had not said it openly, but almost no one at United We Can was caught by surprise when Pablo Iglesias threw in the towel last Tuesday night. “He is leaving, he is saying goodbye,” commented some leaders after listening to his last rally, on Sunday afternoon in the Madrid neighborhood of Vicálvaro. He had been hinting at it throughout the campaign, but that day it was even clearer. He was citing his closest collaborators one by one to thank them and acknowledge their work. And at one point, he turned to Vice President Yolanda Díaz, said of her that “above all, she is a good person” and summoned the attendees: “I ask you to take care of her, not only when she is right, but also if one day you are wrong. Then you will have to take care of it more than ever ”. The polls already pointed to the fact that the triumph of the right was inexorable. And the feeling remained in the air that he was writing his farewell. If Iglesias pointed to the head of Labor to be the next candidate in the general elections, this Wednesday sources from the Podemos leadership confirmed that the Minister of Social Rights, Ione Belarra, is shaping up to succeed the hitherto leader of the training in the other key position: the general secretary of the party.

“I’m scorched.” At some point in the middle of last year, the then Second Vice President of the Government concluded that his time was up. The polls revealed that his public image was very eroded and on a daily basis he found that his figure was like a lightning rod – “a scapegoat,” he said at the time of his resignation – which attracted all the criticism. The insults, the harassment at his home, the effort to implicate him in murky matters that reached the courts and that most of the time ended in nothing … “I have not known since the time of the Second Republic verbal attacks as violent as those that Pablo Iglesias has received ”, says Juan Carlos Monedero, the only member of the founding nucleus of Podemos who has continued by his side. “In this same campaign, more than 30 journalists from television, radio, press and networks have insulted him directly and grossly.”

Faced with these attacks, the most warrior and defiant Iglesias came out, an attitude that, his collaborators admit, on many occasions only made things worse. But, behind that armor, the leader who wanted to bring the 15-M revolt to the heart of institutional politics showed signs of fragility. “He looked sad, even a little depressed,” says one of the main leaders of the formation. By contrast, in the polls, the Minister of Labor, Yolanda Díaz, with a friendlier profile than hers, rose like wildfire. It was then that he made the decision. But he ran into a problem: Díaz didn’t want to hear about assuming leadership. The struggle with her began shortly before the summer of 2020 and lasted for months. Until, in March of this year, a false move by the PSOE in Murcia provoked a cascade reaction and the calling of early elections in Madrid. And there jumped the opportunity he was waiting for.

“Pablo was confident of helping the mobilization of the left, but he knew that he had very little to gain in Madrid,” says a collaborator. “His only objective was to save the political project that he founded, because the risk was to be left out of the Assembly. And once achieved, he has decided to leave ”.

The campaign advanced without the polls moving from the forecast of a clear victory for the right wing. And, more and more clearly, Iglesias’ attitude denoted a farewell, even though in interviews he still said that he planned to continue two more years as party secretary general. He suggested it at his rallies, when he reviewed the seven-year history of Podemos, vindicated each of his decisions, applauded his teammates and pointed to Díaz as the future. When he admitted in interviews that his figure was worn out. When he denounced, more vehemently than ever, the harassment of his family or the death threats. A leader from his closest circle tells that, on the same Tuesday, he told his collaborators: “I think Pablo is leaving.”

Not because it was expected, the decision has ceased to plunge the organization into uncertainty. “We are not going to find a figure of Pablo’s power,” admits a leader who, nevertheless, affirms that Díaz has a very broad internal support. The problem is that the vice president has not clarified whether she will accept the assignment. And also he is not a member of Podemos, so a double succession will have to be faced, in the electoral brand and in the party.

Iglesias is convinced that with Díaz the expectations of a declining political formation will improve. “The replacement of Iglesias reinforces Podemos,” says Monedero. “His figure was badly beaten after seven years of brutal personal attacks.” The former vice president repeated during the campaign that the future of the organization is now in the hands of women, an idea in which Monedero abounds: “Leave Podemos in the Government and with very powerful female figures such as Yolanda Díaz, Irene Montero or Ione Belarra, but also Martina Velarde in Andalusia, Pilar Garrido in Euskadi and many others ”.

At a rally last week in Leganés, also the parliamentary spokesman for United We Can, Pablo Echenique, confessed that he had thought many times about leaving it, but that he convinced himself: “If Pablo holds on, so will I.” Iglesias has not held out. Now it remains to be seen if the formation with which one day he revolutionized Spanish politics does.

The leaders of United We Can consumed the day after the resignation of their leader in internal meetings to prepare for the future and without much desire to make public statements. Those who did speak out were to praise the figure of their hitherto leader and deplore the attacks against him. “The extension of Pablo’s political life has been inversely proportional to his value and contribution to the social progress we are experiencing,” the Minister of Social Rights, Ione Belarra, told EL PAÍS. “The harassment of the extreme right through its political arms (sewers) and media (hoaxes, smear campaigns …) have caused one of the most brilliant leaders that our country has given in the last hundred years to leave politics sooner than it should ”. Belarra pointed out among the merits attributed to Iglesias “the end of bipartisanship” and “ensuring that the PSOE has not leaned further to the right”, as well as social measures of the current Government such as the increase in the minimum wage or the creation of the minimum vital income .
Also his partners from the United Left, in a statement, glossed their “determination against the political, economic and media oligarchies.” Yolanda Díaz expressed herself on Twitter: “Pablo, many years ago I told you that you were changing the history of this country. It has been and is a pride to be by your side. Thanks, my friend. Love you [Gracias, amigo mío, te quiero]”
Criticism of what they understand as “harassment” of Iglesias did not come only from his political background. His former partner, Íñigo Errejón, leader of Más País, deplored: “He has suffered intolerable personal harassment that must stop immediately.” “Pablo Iglesias has played a fundamental role in Spanish politics and in the political change in Spain,” Errejón summarized. Joan Baldoví, Deputy of Compromís, elaborated along the same lines: “The hunt for Iglesias is probably the biggest manhunt that has been done in this democracy.”
The nationalist groups also had words of appreciation to the former vice president. “Pablo Iglesias, eternal respect,” ERC spokesperson in Congress, Gabriel Rufián, highlighted on his Twitter account.
On the other hand, from the parties of the right, only reproaches and samples of satisfaction came. “You are not leaving, democracy throws you,” wrote on Twitter, the same Tuesday night, the PP spokesperson in Congress, Cuca Gamarra. / LUCIA TOLOSA