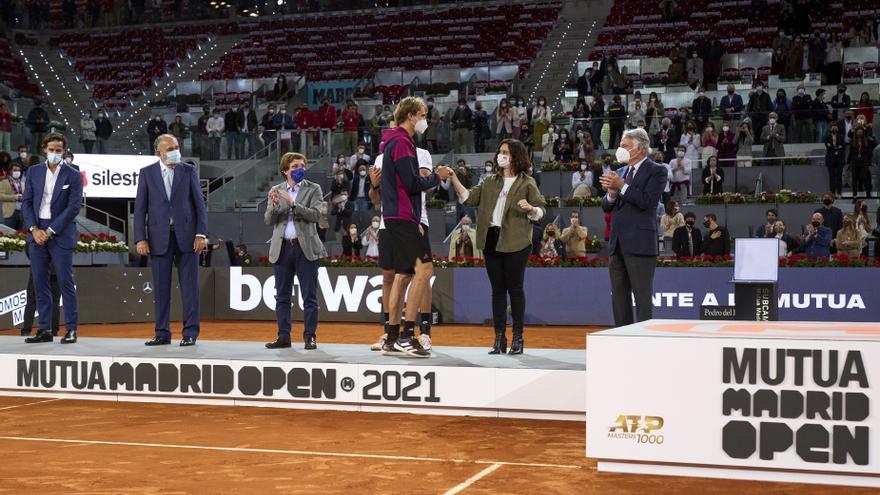 The Mutua Madrid Open tennis, whose first edition was held in 2002, will continue in the Spanish capital until 2030 after the agreement reached between the City Council and Gerard Tsobanian, president and CEO of Madrid Trophy Promotion.

The City Council, according to Mayor José Luis Martínez-Almeida, “maintains substantially the same figures in this agreement, which do not represent an increase with respect to the above, and will continue to be about 10 million euros per year “.

The agreement reached between the City Council and Madrid Trophy Promotion also includes the construction of an additional clue, close to the outdoor courts, with a maximum capacity of ten thousand people and that will respond to the demands of the ATP and the WTA.

“We have committed ourselves so that the tournament continues to grow and it will also have a new infrastructure that will allow it to continue to consolidate. It will allow us to increase the advertising impact and tourist capacity because the expected return is higher than what we invest, “he said.

“The Mutua is one of the symbols of sport in the city and I think that after the Grand Slam it is the fifth or sixth great tournament in the world. For Madrid it is essential to combine professional sports with grassroots sports “, he confessed.

For Gerard Tsobanian, President and CEO of Madrid Trophy Promotion, this tournament “means many things because they have been in our relationship for twenty years and the tournament has gone through all kinds of moments”.

“Without the help of the city it would have been very difficult to get where we have come. It is a tournament for all Madrilenians and the economic return, not advertising, is 105 million euros, “he stressed.

Feliciano López, director of the Mutua Madrid Open, stressed that looking back he realizes that he has the lucky to be from the beginning in this project and that as a player and manager the vision is different “.

“As a Spaniard, being able to have this tournament is very special and I think we are privileged. There are many places in the world that would pay a lot of money to have such a tournament, so we must be satisfied and value it. The contribution of the city is decisive to have a tournament of this level “, Rafa Nadal said.

The presentation of the renewal of this new agreement was attended by Manolo Santana, for which the mayor of Madrid wanted to recognize as an “icon” and of which he said that “the city will always be grateful for his contribution to this tournament.”

The first edition of the tournament was held in 2002 on a hard court and indoors at the facilities of the Rockódromo from the Casa de Campo. Seven years later, in 2009, the tournament went on a clay surface and moved to the south of the city, to the Caja Mágica, also hosting the women’s category.

The next edition, 2022, will be held between April 26 and May 8 and will once again feature some of the best players in the international ranking.