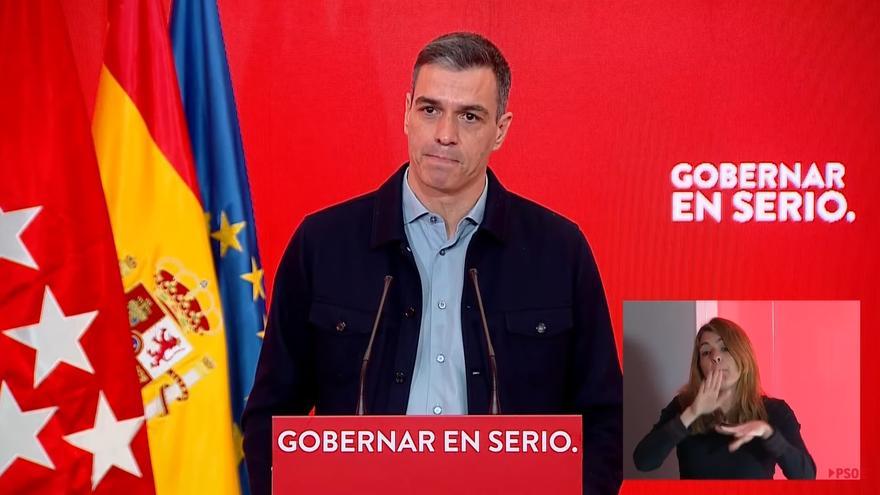 The rulers have no word, because none of them write their speeches. This particularity does not detract from authorship, since the ghostwriter of Elizabeth II’s interventions must learn to speak like the English queen. From this previous clause, please award Pedro Sánchez or Joe Biden the following sentences: “We are not even halfway there, this will take time” and “Today we are approaching the end of this nightmare; there is little left, very little.

Indeed, the modest assumption that the halfway point in the vaccination battle has not been reached belongs to Biden. Instead, the umpteenth announcement of the end of the nightmare is scored by Sánchez. To contrast with the data, the exultant “there is little, very little” of the President of the Spanish Government was pronounced when his country had not exceeded six percent of complete vaccination guidelines. A neutral observer would concede that in Spain “there is much, very much.” On the other hand, the tenant of the White House exhibits some fright when his country has already injected the two regulatory doses to twenty percent of the population.

The United States triples Spain in vaccination quota, but Sánchez a hundred times Biden in optimism. What is more important? The students of the American giant march to the bottom of the planet in mathematical proficiency. However, they lead the table on their own perception of the domain of said subject. They are bad but consider themselves good, a not inconsiderable second part in the empire of self-confidence. In parallel, the President of the Spanish Government is not required to get it right, but to spread it, even if it is figuratively.

Nobody in their right mind would envy the work of Pedro Sánchez, who has been betting on a radiant future successively delayed for a year, with more enthusiasm than figures in his support. By comparison with his colleagues, he practices a magical realism, confronted in the domestic market with the tremendous impatience of Díaz Ayuso. In his constant appeal to fantasy, the socialist leader presents himself with the aura of a fairytale prince. His fine appearance helps him, something that could not be written of a woman although it is also indisputable that the physicist has reinforced the image of Angela Merkel as the last great statesman, before sinking into the abyss of pandemic pessimism.

Under the guise of a herbivore who apologizes to Rajoy for having hinted at the indecency of the then president, Sánchez is a predator. When his enemies find out, it is too late. It bites while asking for forgiveness, the coherence latent in its continuous rectification is often neglected. For example, for a year he has been reproached for his announcement that he could not sleep with Pablo Iglesias in his Government. Consequently, he should be congratulated now that he has recovered sleep without apparently moving a finger, and lulled by the lullabies of the residual ministers of Podemos.

While Merkel racks her brains to subdue the Länder, who seem to be afflicted with 16 different strains of virus, Sánchez unleashes the autonomies with a liberality that leaves federalism behind. The Allies enhanced the regional fragmentation of Germany, to ensure that Prussian imperial sentiment did not re-emerge. On the other hand, the experiment of the Prime Minister seems risky in the homeland of cantonalism. However, the blind transfer of epidemiological powers has not caused more shocks so far than the differences between German and North American states.

And incidentally, the regional exaltation has cornered the theoretical head of the opposition, overshadowed by the volcanic Baroness Ayuso. At this point, the profusion of articles on the injuries that the Madrid president can inflict on Pablo Casado forgets that his foreseeable victory will harm Sánchez to a greater extent, for having chosen her as an antagonist. If Gabilondo does not serve as a candidate, much less an excuse for an electoral defeat, with a possible overturn of thirty deputies in two years. The only consolation is that the professor has sunk in absentia, if he had mediated some effort on his part he would have annihilated the PSOE in the capital.

The Prime Minister is listed on the futures market, because this resource has always worked for him in extreme situations. None other than Chomsky forces rulers to become illusion makers, and neither did García Márquez look like a magical realist author. The style has been imposed on Sánchez, since starting a paralyzed country is more difficult than simply trusting in the future. Just yesterday, the black perspectives of the Airef tax authority on the recovery of international tourism configure 2021 as the second year in an induced economic coma.

Macron is a member of a family of doctors. At the beginning of the year, he ignored the experts and refused a new confinement, which he has had to impose due to the rise of the coronavirus. Biden opts for caution, with Kamala Harris reduced to a Chinese vase rather than a vase. Only Sánchez oozes optimism, the pandemic is not the greatest vicissitude of his career. He promised 25 new infections per one hundred thousand inhabitants and multiplies that figure by seven, but magical realism was never good at numbers.