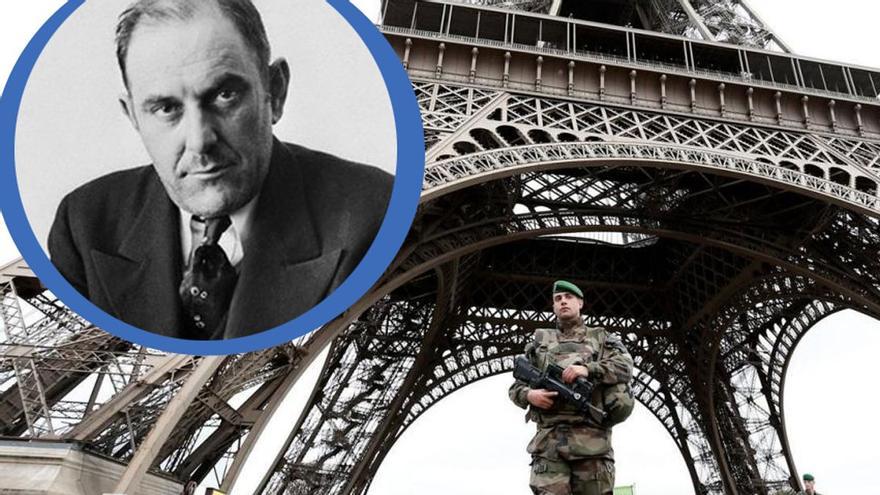 He was a fellow as elusive as a puff of smoke and as charming as a young girl asleep. This is how one of the United States agents defined one of the most brilliant con artists in history. An individual capable of sell by pieces, twice at least, the Eiffel Tower and to cheat $ 50,000 to Al Capone himself. The Count Victor LustigThat’s what he said his name was, he had a scar across his face, but he never had to resort to violence in his long and fascinating career of scams.

The truth is that today it is not even known what it was called. In the file that the FBI opened about him and his adventures, Lustig is listed with 47 different identities. In that police document it is stated that he was born on October 1, 1890 in the city of Hostinné, then part of the Austro-Hungarian Empire, today in the territory of the Czech Republic, but the supposed aristocrat Victor Lustig does not appear there in any registry.

It was the 20s of the last century and France was experiencing a debate about whether to tear down the Eiffel Tower and sell its pieces to save money and face the crisis. In 1925, according to account in his memoirs James Johnson, the former secret agent in charge of hunting down Lustig, this arrived in Paris.

He listened attentively to the controversies about the future of the Eiffel Tower and launched his most audacious scam. He forged the seal of the French government on some documents to pose as an agent of the Gallic state and was cited in the luxurious Hotel Crillon in Paris With several businessmen to whom he offered to buy the pieces of the Tower, it was cheap iron that they could later resell at market price, a round business but one that had to be discreet. Several accepted, paid and kept quiet, even after being deceived.

Also Read  The IPL is back with unfinished business, and it was always going to be | IPL

Lustig did it again a second time before disappearing from Paris.

FBI fact sheet on Lustig with his 47 false names

Journalist Jeff Maysh, author of “Handsome devil” (something like “The Charming Demon”) about Lustig’s life, sets his next step in America. There, Lustig made fun of the FBI agents who tried to hunt him down by registering with their names in different hotels and ships in which he was staying on his trips. He always carried a trunk in which he carried priest or suitcase boy costumes to get out of trouble in a pinch.

In that book are included “the ten commandments of Lustig”, a kind of code of good scammer:

-Listen to others with patience

-Make a mention of sex, but do not make any more allusions to it unless the other person shows a strong interest in it

-Never talk about diseases, unless the other person shows interest in it

-Never brag. Let your importance be obvious to your interlocutor

The forensic psychiatrist José Cabrera explains that “Lustig was a master of swindlers, a man from the old school, a character from a novel. In his time there was no way to prove whether one was a count and an Austro-Hungarian. I don’t think that today someone would be able to sell the Bernabéu stadium, as Lustig did with the Eiffel Tower or as he did with the Brooklyn Bridge ”.

Also Read  US breaks its record for infections for the second day in a row with 225,594

Cabrera points out some traits of Lustig that are essential for every scammer who wants to make history: “having a greater than average intelligence, a great capacity to empathize, to listen and also to seduce the other. And also a past shrouded in fog, something mysterious, that nobody can verify. “This expert adds that Lustig, like the best scammers, always played” with the greed of the one who is going to be scammed. There are people who are greedy and who fall more easily into these deceptions. ”

Vicente Garrido, Professor of Criminology at the University of Valencia and that he has assisted the police and the civil guard in several criminal investigations, explains that Lustig was “a professional, a vocation scammer, someone who made cheating his way of life. He was an intelligent, educated person, who repudiated violence and won over others for intelligence. ”

A woman gave him away

True to those commandments to seduce the cousins I was going to cheat, Lustig came to Chicago, where he met Al Capone and convinced him to loan him $ 50,000. He never returned them and was discovered by the mob boss, but he still managed to stay alive. Capone told him that he should have been his advisor and Lustig replied. “It should have been your accountant,” alluding to the person who reported him.

But the so-called Count Lustig made a mistake. A woman with whom he had a relationship and whom I had been unfaithful reported him for forging dollar bills and was arrested in 1935. He escaped from jail with the old method of knotting sheets and hanging out of the cell window, but was arrested the following year and sent to the harsh Alcatraz criminal. He died there in 1947. Upon his arrival at that invulnerable prison, when asked to fill in the prison form, Lustig humbly wrote in the box where he should put his profession: “Apprentice salesman.”