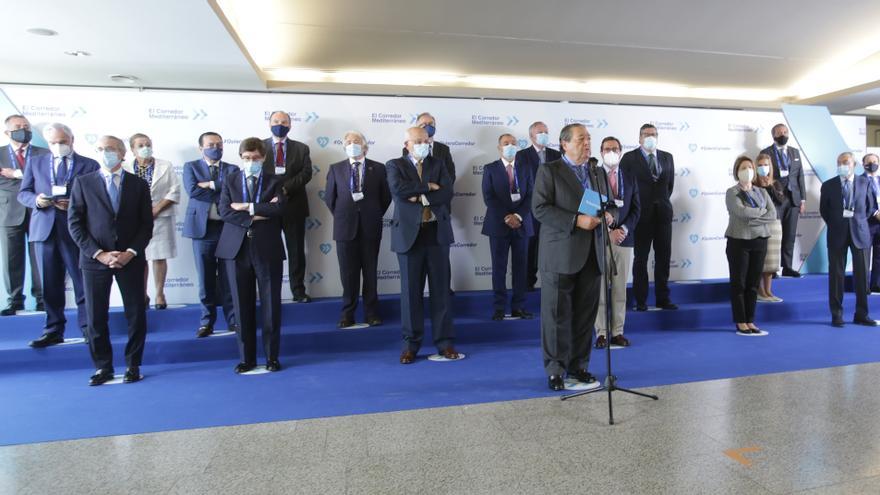 València, Nov 12 (EFE) .- The Mediterranean Corridor has made important progress in the last year and now has an opportunity to receive investment from community funds for economic reactivation as it is aligned with the requirements of the European Union plan.

This has been revealed in the Business Act for the Mediterranean corridor held this Thursday in Valencia in which the Minister of Transport, José Luis Ábalos, has participated, who has announced that the State Budgets collect 1,982 million euros for this railway corridor .

Ábalos has alluded to the reform of the law that the Government will make to shorten the procedures for processing public contracts, so that it allows “investing and executing” these European funds, as stated in a round table with the president of the Association Valenciana de Empresarios (AVE), Vicente Boluda, and that of ProAVE, Federico Félix.

In addition to businessmen from various regions of Spain and the president of the CEOE, Antonio Garamendi, the event was attended by the president of the Generalitat, Ximo Puig, who described the corridor as “a fundamental nerve for the progress of Spain” and affirmed that European funds must serve to “end it once and for all” and connect southern Europe with the center of the continent.

For the Minister of Transport, the corridor complies with the principles demanded by Europe within the reconstruction plan, the fight against climate change and digitization, since it involves a decarbonisation of transport, and has stressed that the important thing for it to continue moving forward is “Political will, financial resources and be clear about the scheme of what we want to do”, although asked if it could be concluded in 2025, he has avoided pronouncing himself emphatically and said: “Let’s hope so.”

Ábalos has reaffirmed the Government’s commitment to promoting the Mediterranean Corridor, which is “strategic and paradigmatic” and is in a “very mature” phase, he said, as well as the other European corridor that Spain has, the Atlantic Corridor.

He stressed that key points of this project are the railway connection of ports and intermodal centers and their digitization and the railway highways, which will help to reconcile the railway mode and road transport, and has indicated that they will try to recover time behind in environmental studies due to the pandemic.

For his part, the president of AVE, Vicente Boluda, has highlighted the minister’s support “for 90% of the claims” that have been made for the corridor, and has asked that the State Budgets continue to include items for this infrastructure that are join those of European funds.

According to the president of ProAVE, the current moment is positive in the progress of the works after the impulse given by Ábalos and his predecessor, which adds to the sole business voice that demands this work.

He has given as an example that there is a difference of 5 or 6 cents of euros per kilo of oranges exported without the corridor, for which he has ensured that 10% of the cost of the railway “would already be paid.”

In a second round table, the CEO of Libertas 7, Agnès Noguera, has demanded that the foot not be taken off the accelerator; the co-chairman of Barceló Hotel Group, Simón Pedro Barceló, stated that the infrastructure will boost the tourism sector and the Spanish economy as a whole; and the president of Stadler Rail Valencia, Íñigo Parra, has predicted that the next decade will be a great opportunity for the commuter and regional services that form the backbone of the country, together with the sustainability of goods.

The minister for Territorial Policy, Arcadi Spain, and other business leaders such as Juan Roig (Mercadona), José Ignacio Goirigolzarri (Bankia) or Salvador Navarro (CEV) were also present at the event, it was broadcast live and hosted by Jesús Calleja and Maribel Vilaplana.

In the part of checking the infrastructure of the Quiero Corredor Movement, the progress of the works has been assessed although they are not going “as quickly” as they would like and they have identified as the most worrying delays in the Antequera-Algeciras section, the lack of dated for the Lorca-Pulpí section, the Beniel-Murcia pending works, and the Murcia-Cartagena connection, which has no date, as well as the Valencia through tunnel. EFE